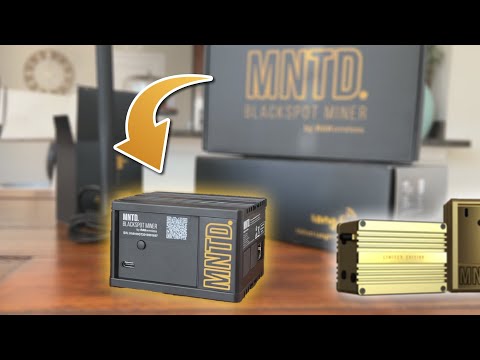 Helium hotspot miners that are IN STOCK and READY TO SHIP yes within 48 hours of placing your order your MNTD Helium HNT mining rig will be shipped so you can start earning passive income mining crypto! Buy the MNTD miners HERE! https://voskco.in/hntM

Helium mining is the most profitable and best way to mine cryptocurrency – Bitcoin mining is loud, BTC miners produce a lot of heat, and Bitcoin mining rigs cost over $10,000 per miner whereas Helium hotspot miners produce basically no heat, no noise, consume $5 of electric PER YEAR, and are incredible profitable passive income earning miners. MNTD is a new branch of RAK Wireless that’s focused on get miners to the people, you know, since Helium HNT is supposed to The People’s Network and that is why MNTD. only has drops of Helium hotspot miners that are in-stock and ready to ship within 48 hours after you place your order! So let’s review RAK 2.0 MNTD and if the MNTD miners are worth buying oh and also good news MNTD has NOTHING to do with CalChip the RAK V2 Helium hotspot distributor that basically the entire world is disappointed with, myself included, go MNTD!

Watch the Rak Wireless Helium miner review by VoskCoin - CalChip RAK V2 Helium Miner is one of my MOST PROFITABLE mining rigs! - YouTube

Well, that was total crap from RAK today.

11:03am - Had 5 miners in my shopping basket, filled out shipping info, put payment info in and NO DICE. My shopping cart was robbed.

Very disappointing. Did anyone get a miner?

Page sat after hitting buy, When i did get through it sold out as I entered payment info.

The same exact thing happened to me, very disappointed at this bull-crap! I think there was something wrong here, Iike they just want to sell second hand for more $ or something !

I think all they accomplished was pissing off a whole bunch of potential customers.

I learned dont be eating breakfast and think 10:05 is ok to make an order… Back to eBay for another $800 spent there on a Gold Version. I got one so far at least from there.

I had my order in less than 5 seconds after it opened. Still no joy.

Me too. It let me add items to my cart. If the item is out of stock it should not let you add it to your shopping cart. Makes Drew look bad. If I were him, I’d be pissed off. So far, no comment from him though. I think.

i got messed up with also

had 3 gold in my cart , was slowwwwww…

arrived at paiment,
got declimed,
put amex in ( less points but always accepted)
“OUT OF STOCK”…
not even 7 minutes in …

i am really angry at myself … how can anyone buy anything now ?

Makes you wonder if there really was any product to begin with? Nothing was said about quantity available.

I have recieved a purchase conformation for a gold unit from this morning’s 11am est sale. I waited for the counter in the final minute to count down, by the time I clicked a black one it said sold out, so I immediately clicked the gold. It kept letting me add to cart but when I hit checkout it wouldn’t do anything, so I would delete from cart instantly and refresh the sale page and click the gold and reclick checkout… After about 7 tries on the gold and inventory about gone it went to the shipping and card and I was able to check out. I’ll post pics if/when it arrives.

Congratulations! Glad someone got one. I’m interested how long it takes to get to you and how well it works.

There didn’t appear to be a limit on how many one could buy. Wonder if a few bought most of them.

I was able to order 1 gold one. My credit card declined the first time due to fraud concerns but I filled out payment info again and it went through. I told my brother to order one and he wasn’t able to, I think they sold out quickly.

Does anyone have one of these miners? During setup I keep getting this error

I was able to snag 2 Black miners and got a confirmation number so I’m thrilled to have been able to get the 2 Black miners but am a little disappointed they weren’t the Gold versions.

I knew this was going to be very challenging and would likely miss out, so I used both my computers. I used my new MacBook Pro to get 2 Gold and never got past the try again message.

I used my older PC as a backup and it worked finally after 20 minutes of trying.

So now the fun begins

did you read the notification about only being able to buy 2?