How Many Solar Panels Do You Need To Mine Bitcoin? 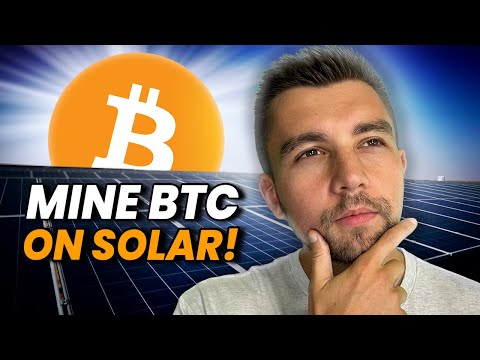 How Many Solar Panels Do You Need To Mine Bitcoin? It’s just math, so if want to turn your solar energy into passive income mining BTC, this is what you need, and how to do it! Sub to VoskCoin - http://voskco.in/Sub

Bitcoin mining is incredibly lucrative if you have cheap electricity or you are generating your own which is where using solar panels to power your Bitcoin miners becomes really interesting and one of the best ways to earn passive income in 2023. More people than ever are installing solar panels, and a lot of solar users, are ending up with a surplus in generated electricity, so instead of letting that go to waste people with solar panels installed on their home should turn that electricity into money, with a Bitcoin mining rig like the Bitmain Antminer S19 we are using in this example. Here is everything you need to know on how many solar panels do you need to mine bitcoin, and what else goes into powering your BTC ASIC miners with solar energy!

How Many Solar Panels Do You Need To Mine Bitcoin?

Wow $31k for a 15kw system is crazy expensive especially considering how cheap your electricity is compared to most of the western world. Is there a limit on how much electricity you can put back into the grid? For example here you can only put 5kw per phase back into the grid as residential but I think business is larger. If you could do a video tour of a hydro powered farm I’d love to see it and I’m sure others would love to see it too

There is another way to look at solar as a lot of places don’t do net metering. In those places size your solar array to your load and only draw from the grid at night. It would cut your effective price/kwh by half and you could likely depreciate the solar array over time. This would allow for the use of a smaller battery system that would recharge during peak sun and assist in utility demand shaving.