I don't understand why my rig stops mining ETH randomly

Hi! I’ve recently entered the world of mining by entering a the mining pool of ETH of 2miners. I’m doing it with a single GPU (a 3070) and since in my country electricity is crazy cheap I still get a good profit even if I’m mining the equivalent of 2 or 3 daily bucks.

The problem is that there are some cases in which the balance of 2miners shows that I haven’t mined anything for the past one or two hours. After I reset the mining software (t-rex) then it shows ETH being mined back again.

Why is this? I understand mining has a lot to do with chance, but not getting anything for two hours sometimes doesn’t make sense to me.

Maybe this is an incorrect forum to post this, but I’m new to all of this.

Thank you in advance

You need to control the GPU with software like MSI afterburner or EVGA’s X1.
There are two clocks (core clock, memory clock) and the power level you will want to maintain.

You can set fan speed in manual or auto mode to cool your GPU. If you use auto, you want to adjust the fan curve to keep the fan speed up in your operating temperature range.

The afterburner software displays two digital frequency meters on the upper left side. You want to reduce the power level (unchained from temp level) while mining without dropping the core clock frequency below 1500 or so. It will drop like a rock after that so just the amount that keeps it at 1500 or above is the right spot. A 3070 may have a higher frequency than 1500, just don’t let it drop to say 300 all of a sudden.

You can safely raise the core clock setting to 100, and increase to 125 if possible. Don’t go too much more. It will help keep the freqency up while you lower the power level.

Set the temp level at least 10C higher than the current temp, and use fan speed to keep the card under 60C. Two fan models tend to run around 50+C and 3 fan models can run in the 40+C range.

Start with a memory clock above 100 on the setting and the frequency display will be around 6000-7000. Increase in steps of 100 until the computer freezes. You should easily get a setting of 1000 and frequency of 8000. After that is where the fun starts. Once you narrow down the setting where you trip out the GPU and have to reboot, lower the setting by 100. This should get you a nice stable operatiing point. A high memory clock that doesn’t crash the system may result in Invalid shares. Lower the clock until there are no invalid shares.

The video card freezing up is typically due to too high memory clock. Temperature is related to power level. Even if the card seems stable at higher settings, it may not run 24 hours continuosly on the pool. The elapsed time is displayed on the software. If it quits running, the GPU is not stable or the network is not stable. Lower clocks somewhat.

Finally, Both Phoenix miner and T-rex miner have setting in the batch file that can detect an idled or crashed GPU and will restart the miner (or computer). Adding a shortcut to the computers startup folder will automatically restart the miner if the computer reboots. I’ve done this on my computer and it prevents long periods of not mining as computers reboot for many unknown reasons.

Key to continuous operation is a stable computer.

Great answer! Thank you for everything. I’ll try to improve my GPU performance with those tips!

rt with a memory clock above 100 on the sett

I’m having the same issue but with an old GPU (TURBO-GTX1070-8G) it just stops for 2 hours but on the T-Rex log I can see that it is processing: 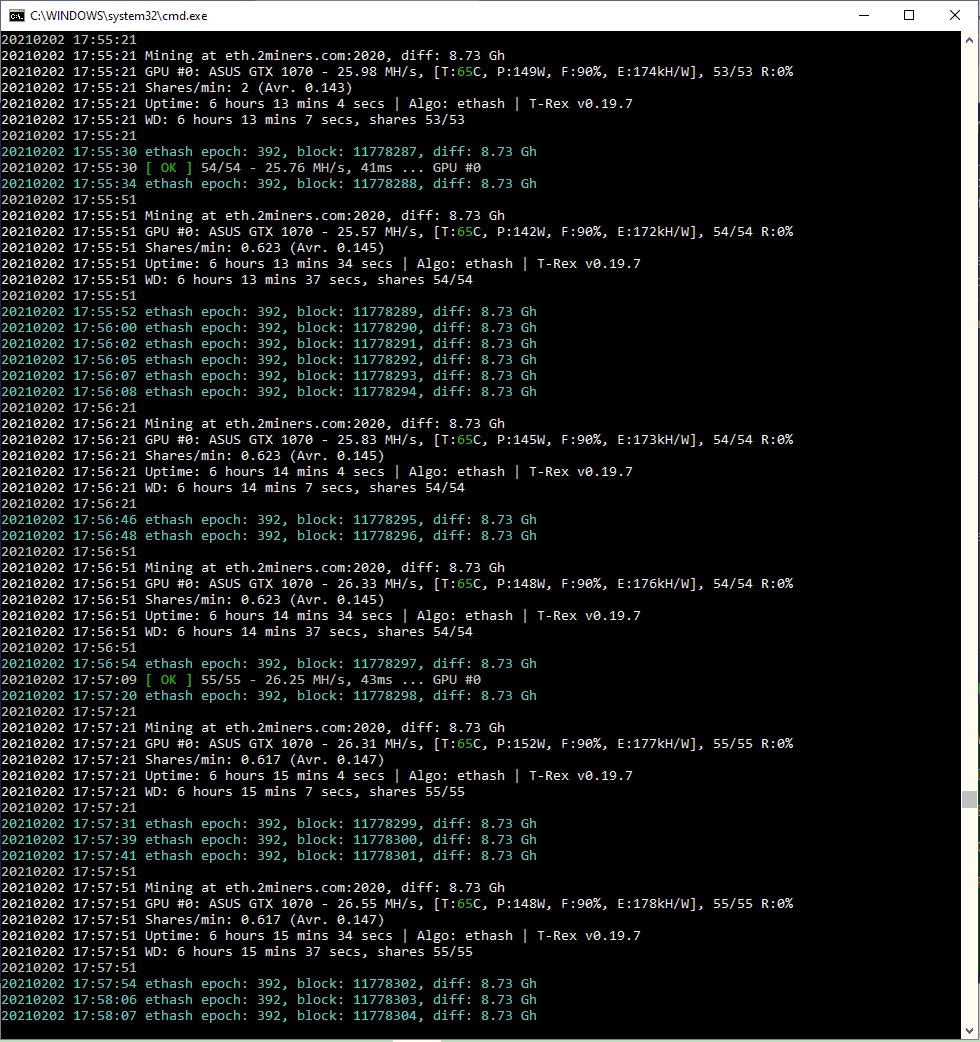 On the Asus GPU Tweak II I have the following settings: 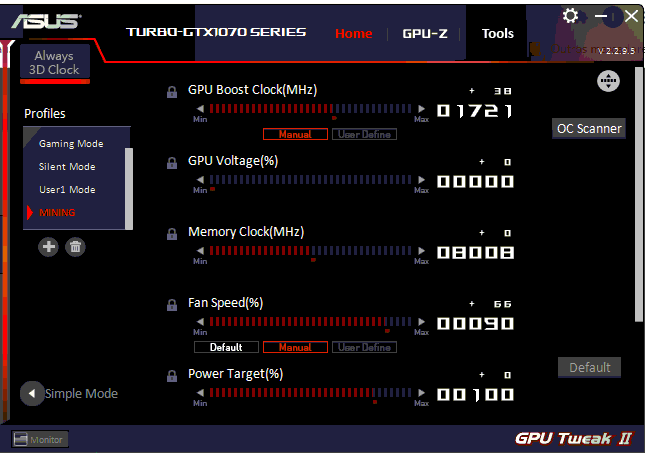 Basically, I started with the OC default settings and changed the FAN to manual so the temperature can be down to +/- 65º, as shown on the logs above.

I’m always receiving the email from 2Miners stating that the miner is offline.

What should I do to make this better?

This is my first post so please be nice.

Have you tried giving it a stern talkin to?

Sorry in advance for this question but i am new at all this can you translate to me what you mean?

Well. Point at it but with all of your fingers (knifehand), stand up and point that knife hand right in its face. Put your other hand on your hip and let your innermost anger come out. Good. Now try to control that anger while talking through your teeth and pointing at the machine. You have been stern and you have given it a good talkin to. Check equipment to see if it works now. It probably won’t but you might feel better.

Nice tactic will do that @Natemfhunter.

Will give feedback in the morning (here at Portugal

) is almost 1am going to sleep

It looks the same, I have been reading about this situation, and maybe is because I only have 1 GPU which represents a very low percentage of the block find…

Since the last post this is the mining status on 2Miner: 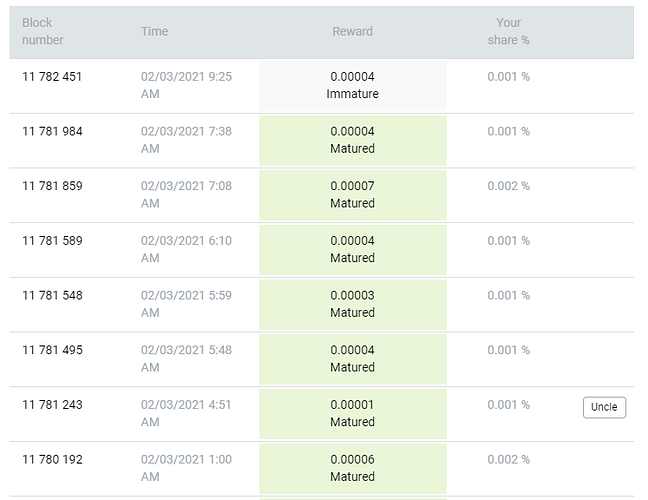 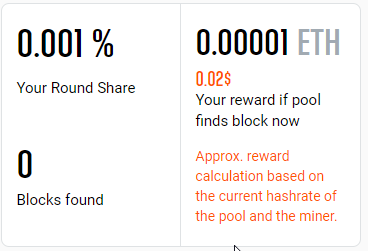 Because I have only one GPU with a low hash rate in that case the share is usually very low or 0%.

Hope this helps clarify the community.

PPLNS: You find shares, your round shares go up, you don’t find them it trickles back down. One GPU can’t find shares fast enough to keep your round share up. You need more video cards in your rig to pump it up. I have a 12 GPU rig and the shares are constant and so is the Round Share. You only earn if the pool finds a block so keep that Round Share up to earn when they do.

Btw @Dollyshunk what is your rig hardware like MB, CPU, GPU, RAM, and PSU? And what mining software, crypto, and wallet do you use?

Notes: lf you get a Biostar motherboard, make sure it has 12 pcie sockets. It is the Pro -PRO versions, not the PRO+
The faster, more expensive I3 processor doesn’t mine a bit better than the cheaper Pentium processor.
8GB of memory is sufficient, no need for 16GB.

PSU’s : I use EVGA Gold SUpernova’s. I am running the 1300G3’s to power the 12 GPU rig. I use Phoenix Miner with the command line statement: -gser 2 to start the GPU’s up one at a time so I don’t go over 1110 Watts. With Afterburner, and minimized Power Levels, I don’t draw over 75 watts per GPU.

1110 Watts. With Afterburner, and minimized Power Levels, I don’t draw

Thanks for the quick reply…

And also by the notes

Going to get some cash to upgrade the system.

Once again thank you for sharing.

Can you tell me the settings on afterburner?

Thank you very much…

YES, I am using Afterburner with my 1660TI’s in windows 10 on 12 GPU’s.
The voltage control is locked due to the driver I use and isn’t a problem.

The Power Level I use varies between 56 and 62 depending on GPU performance. It helps keep core frequency above 1000-1500

The Temperature Control is set to 75 C as I don’t want to throttle the GPU with it set too low.

The Core Clock I used to use was around +100 but I find I get more hash by lowering it. Some cards like -500 while others like -200, and others still like 0. Those setting work best.

Memory Clock: Raising the Memory clock tends to lower the core frequency and the faster the better…until the GPU crashes. Then I lower the setting and start again.
Two fan cards run around 839-900 while 3 fan cards can take a setting of 1200 typically.
You are still too high if you get INVALID shares. I usually run up the clock til it crashes, then lower a bit and look for those invalid share. If none, you are good to go but if some … lower mem clock more.

Fan: I like the fan running between 65-85%. I used to use a manual setting but now choose AUTO and adjust the fan curve so the gpu’s temperature is in the middle of my curve setting. This way the gpu’s run with about 80% fan which changes as the gpu’s cool or warm up.

You only see 8 GPU’s in the GPU TAB, to see the remaining GPU’s just click the setting icon and select the other gpu’s. And YES I am running 12 nVidia gpu’s on the same motherboard in Windows.

Thanks for the full report will make some adjustments and try.

Finishing the RIG build during the next week (I hope

) as soon I have photos I will share them.

Can you or someone take a guess why on the 4x ASUS GTX 1660 SUPER DUAL OC that are all the same model, memory etc… etc… one of them is going over the power limit and clock and also the temperature is higher than the other 3 GPUs.

Prints below to check what is happening.

Here is a photo of the Rig still not finished.
Made with some old windows frames 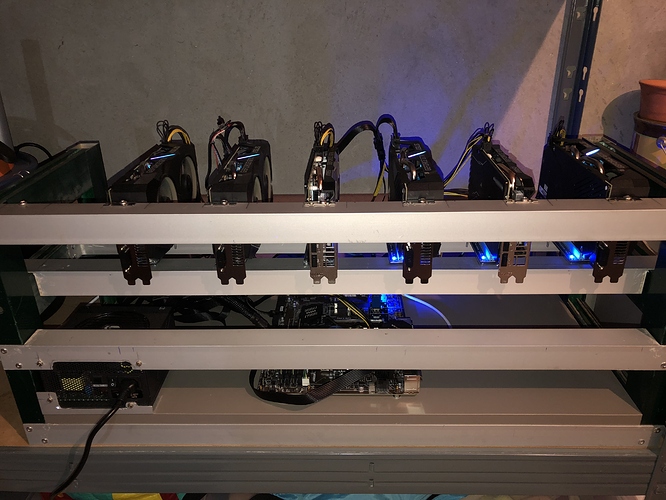 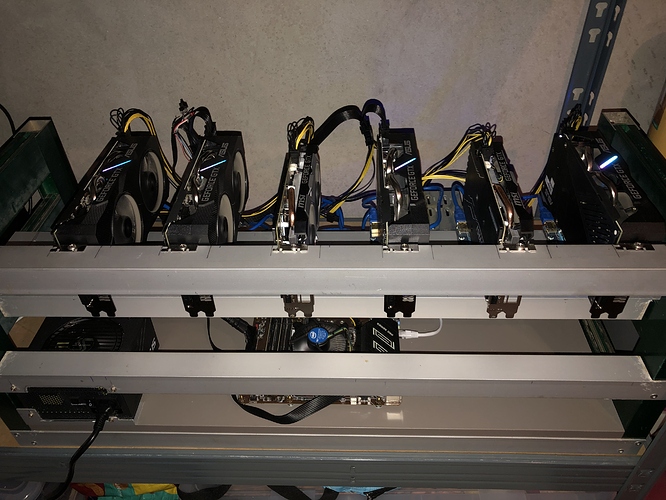