In over my head?

Ok, so here is my cry for help.

Finally got all of my pieces in and set up my rig last night. I figured since I’m using BetterHash on my gaming PC to mine, I would try that with my rig. Didn’t work out so well because evidently BH still uses Claymore.

Second go, I set up NiceHash and I kept getting Benchmark errors, and random BSODs.

Third, I decided to set up HiveOS.

With the two miners in Windows, I followed a guide I found on YouTube about turning off updates and what not, but it kept giving me BSOD relating to drivers even though I had the newest adrenaline software.

With HiveOS, it ran for about 5 minutes and then gave me a GPU error and I guess it shut down.

I’m at wits end. I don’t know what I’m doing wrong, I just want to mine Ethereum and have it sent to my CoinBase account. I’ve followed guide videos, I’ve read forums, and I guess I just suck at setting up a miner which is disheartening because I plan on building a few more after the new year.

I’ve tried to set up Phoenix Miner 5.2c I think it was, and it gave me a BSOD as well relating to Windows VRAM memory needing to be increased?

Phoenix Miner was probably the most successful of all the failures in setting up. Maybe I didn’t set up Windows correctly? I thought it should just be a load up and go, but it definitely doesn’t seem that way.

If I want to proceed with Phoenix Miner, does anyone know of a good in depth guide on setting up the rig.conf file? Most everything I can find just says “enter your wallet and rig name and hit go” which doesn’t seem to work very well for me.

I don’t know. I’m kind of depressed a bit about it after being so hyped to get it running.

For running NiceHash, go into the bench marks page and disable everything except for one or two Eth protocols and try again… If you try to benchmark against everything, some of those do seem to crash the computer with certain video cards.

focus first with just one GPU installed, and then report back?

I’ll be trying again tonight after work, I’ll do one gpu and post up a screen shot.

One of my concerns is about the page file size in the advanced windows settings. Does that have to equal the total memory of the cards? So 6x 5700xt =48gb?

Anything over a 30GB paging file is plenty for 6 GPUs. When you tried HiveOS, did you download the beta image? It is the only one that will work with 5700s. Windows works fine but you have to do several things to get it to function without a lot of manual intervention so I would recommend using HiveOS if you are new to this. If you stick with Windows, you do not want to use anything newer than Phoenix 5.1c and 20.4.2 AMD drivers with a 5700. What are you using to set your clocks? OverdriveNTool? Phoenix?

Did you set up your overclock settings in HiveOS? What did you use for values?

Ok, so I guess my mistakes were many…

As far as overclocking, I haven’t touched it because I want to get it running first, and then I’ll play with those. I was planning on looking up some of the premade ones for 5700xt and go that route. All of my cards seem to have Micron memory, so I’m guessing my best undervolt will be around 120-130w per card according to one of Guntis’ videos I watched.

Before you startup the rig in HiveOS, set this as the default overclock. Stock settings tend to crash 5700s. It isn’t what I would recommend running with long term but it should be conservative enough that they will all startup without issue. You can play with them a bit later and add memory undervolt etc. This will get you going though. 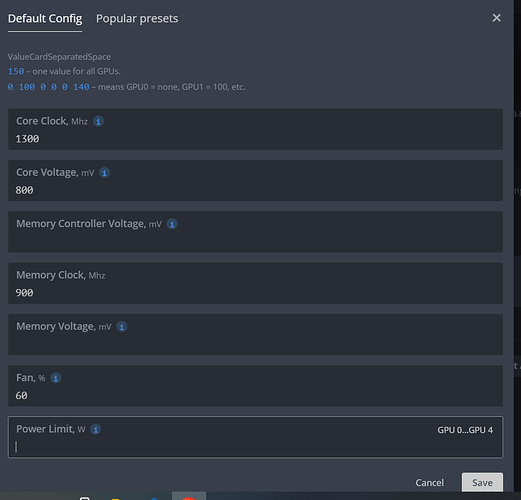 After you bios mod, you will need a higher core (even higher than Windows) to get decent hashrates. Here is what I am currently using. It gets 57-57.5 MH/s. Also, when you bios mod, don’t set tREF any higher than 6000. 9000-12000 doesn’t get you anything more except possible instability. 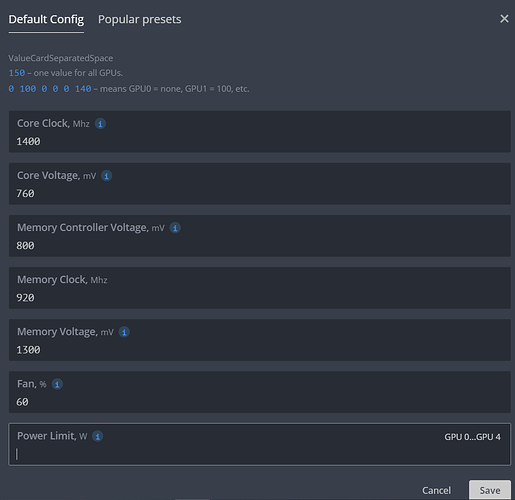 This video isn’t too bad for setting up Hive. https://www.youtube.com/watch?v=GcBWdyCB-94 Stay far away from HiveOn pool. The freakish amount of stales and rejected shares aren’t worth the 1%. I would use a pool like nanopool, ethermine, 2miners, etc. I think ethermine sucks but a lot of people like it. I like to do head to head tests with identical rigs and Nanopool always wins for whatever that is worth.

Bios mod… another thing I need to figure out lol. Should I do all that on the cards in windows and then plug them all in and set up Hive?

You will have to create the new bios in Windows. If you want to reduce the minimum voltage, you will need a 5700 on the computer to get More Power Tool to work so it is easiest if the rig is running Windows. If you don’t care about the minimum voltage, you can use any Windows computer and then flash them using HiveOS. The flashing part is far easier in HiveOS than Windows.

So can I get the bios on my PC and upload it somehow in HiveOS? I use a 5700xt in my computer as well, so I can’t do the more power tool option.

I feel like I should just give you my number to explain, I feel retarded with all the bios mod talk

I’d say skip the minimum voltage mod if you are going to run HiveOS. At the core you need, you will be above 750mV anyway so it really isn’t needed. Here is what I would do.

5700s are the best mining GPUs but are by far the most complicated to get stable. Don’t get frustrated. You will love them later

If you want to skip all the bios mod stuff and just worry about the flashing, send me a PM with your email address and I will mod a Mech OC bios and send it to you.

Ok, so I figured out it was a riser that was keeping me from all 6 GPUs, so that’s good now. I also really appreciate @bick0012 for all the help! I’m currently flashing BIOS in HiveOS, and I’m not sure how long that takes, but it’s going! I’ll post more pics when it’s up and running! 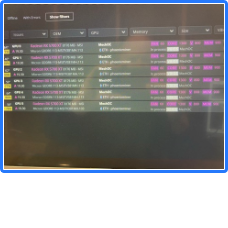 So this is where I sit currently. BIOS mod wouldn’t go through, but I played around with overclocks a bit. The temps are still higher than what I’d like, so I’ll be buying better fans soon. 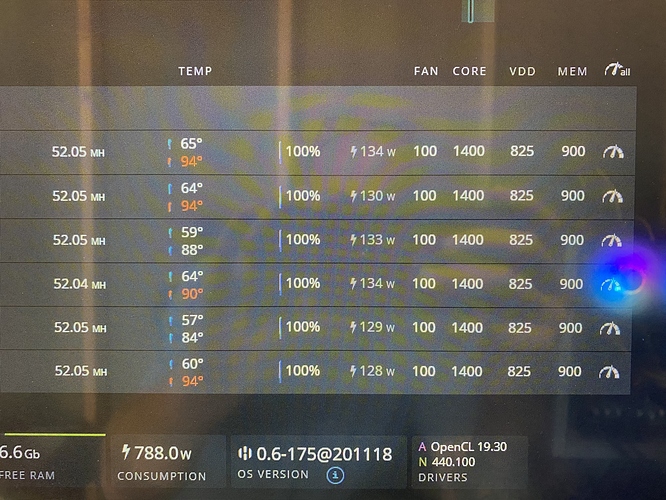