Hi, I recently watched your “GPU Mining KILLER - The Innosilicon Ethereum ASIC Miner - A10 Review, Mining Profits, and Tutorial!”, thank you for the nice review.

I’m planning to get one of them, but at the end of the video you said that you will not be adding this miner to your mining, I’m curious as to why?

I don’t think the Innosilicon A10 is a good buy at this time unless you picked it up for $800 dollars, and no one seems to be currently selling them that cheaply.

Ethereum wants to move to proof of stake, sure, they also are considering moving to ProgPoW, but they’ll probably continue to try and drag that out until they can move to a hybrid PoW and PoS model …

But anyway, to the point, over the next year at current mining profitability figures for the Innosilicon A10 on 10c per kWh electric rate, you’d earn $1200… so if you paid $1200 you could only hope to breakeven on it within the next year… I’ve heard some rumors these miners could have issues with the DAG file by the end of the year too.

Ultimately this miner is too expensive for me, and earns too little, to recommend buying it in this current market and at relative current prices 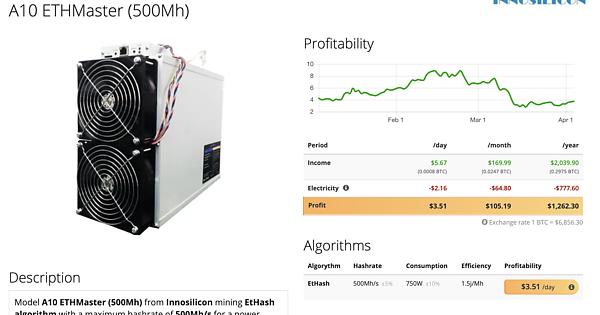 If anyone is interested in checking out the video that @louisswart referenced, here’s the VoskCoin review on the Innosilicon A10, that miner along with the Bitmain Antminer E3 have been killing GPU mining profitability for quite some time now.

It might be worth it if you have cheap or free electric (which most of us don’t have) and you find a good seller.

Is there a cheap ETH mining rig you would recommend? I’m not looking to make a ton if it pays for most of the electricity I would be happy I have a couple power supplies just sitting around collecting dust. I have some L3’s now and they got me hooked im not making any money but im having fun and who knows maybe in the future my BTC will be worth more than it is now.