Is anyone liquid cooling?

Is anyone liquid cooling their ASICs? I have a bunch of Goldshell KD5 miners that I’d like to liquid cool if possible. I just want to hear people’s experiences with liquid cooling and hear how it is going.

If you can setup your dry cooler (fan with radiator) outside you will be golden. Otherwise you will need to exhaust room/space very well since heat will still accumulate.

Each KD5 is roughly 2200 watts; meaning you will need to provide immersion oil cooling for ~8000btu/hr

If you’re going to DIY your immersion setup, I’d be experimenting on an old, relatively cheap, similar wattage miner or two before I immerse my verrrrrrrrry pricey KD5’s. Maybe pick up a couple of functioning Antminer S9’s from a reputable eBay seller to simulate the heat load?

Don’t forget that whether you use mineral oil or specialized dielectric coolant such as Bitcool, heat transference is much lower than it would be for water. So you’ll need to size your dry cooler accordingly. This company offers a great resource that’d help you setup your system. Good luck.

Engineered Fluids SLIC Guide is designed to help educate you about the terms and concepts used in Single-phase, Liquid Immersion Cooling for electronics.

I am also VERY interested in cooling my KD5s in an immersion setup. I already have a room that I use with lots of ventilation that works well but if I can immerse them they will last much longer and perform better. I found the same website as the post above, engineeredfluids.store but I am new to crypto mining and so I don’t know what I don’t know and I can hardly find anything at all on YouTube or forums. I currently have 8 KD5s and will hopefully get more soon so i’d had a pretty big setup. Looking to have 14 to 15 or so in total. Any info is MUCH appreciated.

I actually sell pumps for work if anyone needs one. Would love to help out to see one customized

8 KD5’s?! Wow. Youdaman. 8 KD5’s now seems like a no brainer in hindsight but at one time not that long ago, that was a brave call.

I haven’t found that my KD5’s need nearly the cooling as do the >3000W ASICs - and I live in Florida. Air cooling has been fine so long as I draw fresh air in and exhaust the warm air outside my garage. That said, immersion would be very interesting if there’s a way to overclock the KD5’s - especially as an offset to every increasing difficulty. On the other hand, overclocking what is now a very valuable miner would really take a pair of brass ones.

Did you find the ~80 page slide presentation that Engineered Fluids has on their web site? It’s a very helpful doc, whether one is a diy’er or has a substantially larger setup.

I have not looked at the ~80 page from engineered liquids I’ll try and find it. I want to immersion cool so I can overclock my units and really make them last a long time.

I will do an exterior heat exchange with radiator to push all the hot air outside.

With my current setup my fans are blowing air out at about 18mph and around 90 to 95 degrees. I have a little bit of air filtration but want to do more. Is 90 to 95 degrees coming out the back good?

@benjiman I haven’t measured exit temp in a while now that it’s late November, but that sounds about right. It all depends on your inlet temp and the CFM that is flowing over the heatsinks.

Don’t forget that whether you use mineral oil (I wouldn’t for a KD5) or go with an engineered fluid (Engineered Fluids, DuPont etc), the coolant and heat transfer properties of the coolant is much less than water. So your dry cooler is going to need to be sized appropriately.

With 8 KD5’s, there’s enough monthly income to warrant using one of Engineered Fluids systems. I have absolutely zero connection to that firm or its owner. Just saying that those are very pricey ASICs to trust to a diy setup . . . IMHO.

One thing that I haven’t been able to find is someone who knows how to overclock a KD5. This would be for immersion only but I’m with you, it’s a great way to extend the yield/life of a KD5 - particularly with difficulty seemingly increasing by the hour.

Yes I wouldn’t try anything without first testing on a few similar units that use the same amount of power. I am perfectly fine using Bitcool from Engineered Fluids but I don’t know what I don’t know and kinda need someone to hold my hand as i go through it all. I know that certain materials do not like dielectric fluid, but what are those materials? For example vinyl tubes, do they hold up to the oil, or will the oil break them down over time? That’s just an example. I will have to call or email them or something but I haven’t seen much in the ways of hand holding for setting up a system of theirs. I could be wrong. I am happy to pay for that info.

There is a random video online about overclocking Goldshell units but I haven’t tried it yet because I don’t know if I can “un-overclock” the unit either. I want to overclock in immersion because I know it’s much safer and cooler, but in open air I am less certain. I got my room temp down to 65 or 70 degrees by adding more intake holes in my wall today. Should help them stay very cool.

What do you do for air filtration? I have reusable air filter material in my air inlets in my wall and then filters over the fans on my ASIC directly. Do you do much else?

@benjiman You’d have to check with Engineered Fluids, but I don’t believe that Bitcool causes hardening of rubbers and vinyls as would mineral oil. I’ve also heard that capacitors in many ASICs can degrade from mineral oil over the years, and either have to be replaced or perhaps live with the degradation (e.g. if it takes 5 years to degrade the capacitors, you might not care). I’m guessing that Bitcool could be glycol-based but it’s just that - a guess. You’d have to ask them. It is proprietary so they might deflect a bit.

I have 2 KD5’s, a LT5 Pro and an L7 on the way (mid-Dec . . . hopefully). My air filtration is really simple, I use the largest diameter ShopVac filter I can get at the inlet (generic, bulk from Amazon). This is an old pic but my setups look like this: 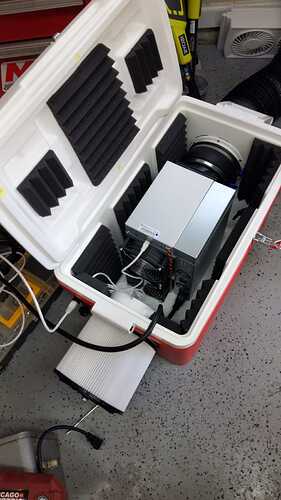 The coolers were the quick n’ dirty way to get up and running. I might build some new boxes out of MDF that will incorporate a standard a/c filter, which would be cheaper. The ASICs do a great job of scrubbing the air in my garage so the filters don’t really last more than a month. At $10 a pop, it’s more than I want to spend.

Fwiw, I’ve since replaced the acoustic foam with auto sound deadening, which works much better. Each Igloo cooler is ducted to an adapter plate fixed to the bottom of a partially open window. With my setup, I’m limited to 4 ASICs max, after which point I’d need to figure out Plan B or find someone to host.

An immersion setup wouldn’t take up much more room (perhaps less) and the KD5’s could be overclocked significantly so long as the dry cooler is sized properly. Also, if I had an electrician up my electricity game, an immersion setup likely could accommodate 6-8 ASICs.

I live in FL and probably can’t overclock as much in the summer as I could in late fall, winter, early spring, so the ability to adjust overclocking for the season would be critical for me in order to manage coolant heat.

I would GREATLY appreciate any other pictures you have. Especially with the air filter and ducting. I am using re-usable air filters right now but they don’t block everything but they do get a fair amount out of the air and then they let plenty of airflow in so the units stay really cool.

Do you know what your internal temp is on your units running? Mine are generally around 90 to 95 degrees out the exhaust using an anemometer (wind gauge with temp gauge too).

I would like to get my air filtration and cooling setup done up nicely until I can get an immersion setup.