I Just saw a YouTube video where a goldshell kd box 1,6th made 3 kadena a day about a year ago, and now my 5 kd box pro makes just over 4 kda a day. Can this be right? In this rate it won’t be proffitable for much longer?

the difficulty on the kda coin is now at 200 and slowly increasing, the higher it goes less you will mine per day sadly , my regular kd box now is just doing meager 0.65-0,7 per day its slowly becoming obsolete add in the fact sadly kda is now at 1.7$ , hopefully it will go up but for now its hold and have patience

I’m having the same issue as I presume is everyone else. Maybe a moderator can merge these two threads?

My biggest question is why difficulty has ramped up so fast so recently? Difficulty jumped over 17% in a week. Did that much additional hashrate come online all at once?

Does anyone better versed in Kadena’s nuances know what’s going on with KDA mining difficulty beyond the obvious? I know that more rigs are coming online and had expected difficulty to go up. But current difficulty is 212.09P. A week ago today, it was 181.03P. That’s a a bit over 17% increase . . . in a week. If difficulty continues to ramp up at this rate, my KD5’s won’t cover their electric costs once my power co jacks rates on 1/1/23 - unless KDA moons, which is looking increasingly unlikely …

… I posted in your other thread & I do not think it is a kadena issue or difficulty issue. It may be related to your pool. There was mention about a week ago here about the kadena ChainWeaver Network being distributed differently across different pools so you may want to check other options there as there were winners & losers.

Thanks @babyYoda! I’ll do that. I’ve little loyalty to any particular pool. Maybe I’ll spread some hashrate love around and see how each KD5 and my KDLite perform in different pools over the course of the next several weeks.

Unfortunately, that’s the nature of mining. Last year one 3090 was making 18-22 bucks a day. I had to change my mindset after EIP 1559. Now it’s about how many coins can we obtain, and getting ahead of the pack.

I understand that, it was just the paste was extreme . So maby i should stop dumping my kda now😅

It is because of the newer higher hash rates on the machines. Also more people turning to KDA for mining. As the hash rate goes up, the profit goes to those with the hash rates.

My main question is not that difficulty has been increasing, but that the rate of increase seems to have accelerated. For example, in 1 week recently, difficulty increased 13%. 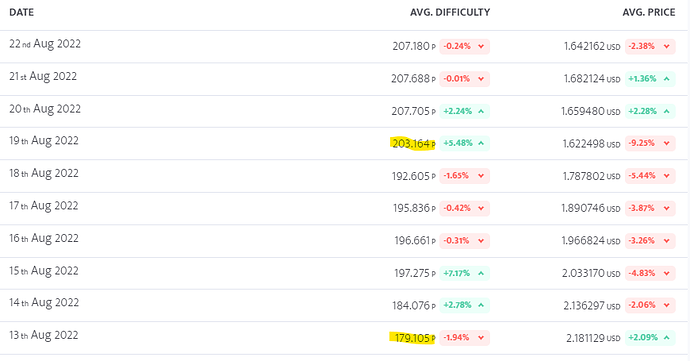 Did 13% more hashrate come online in 1 week? Maybe. It’s the most plausible answer, though it’s hard to rationalize (or even track given the volatility of hashrate vs time data). The vast majority of large mining farms mine BTC, not alts (I get that some of these farms will mine some alts). So even if a new, large farm powered up last week, it shouldn’t have had any material impact on KDA difficulty. Perhaps it’s all the various Goldshell KDA miners being shipped to hobbyists/mom & pops? Still, that would’ve been a lot of hashrate power shipped/installed in a relatively short time span.

I’m concerned that the acceleration of difficulty, should it continue, will render my KDA miners unprofitable well before I had planned/calculated - unless KDA absolutely moons. So I’m trying to understand whether recent difficulty spikes have been anomylous or is this now the new norm? Or said another way, should I start upgrading my KDA miners (get a KD Max or two) or watch and let the dust settle first? Hard question to answer but I’m inclined towards the latter.

At this price point, buying the coin straight will net you a greater return. Buying KD boxes is questionable given the heavy hash increase. Buying a KD lite, is the current best plan,if you are gonna buy one.

You can definitely thank Goldshell,IBeLink, for making too many shovels too quick. Based on a $24 coin back in November they probably did the math as to how many units to pump out to bring the daily average down to the $30-$40 a day range. The KD5s were banging out $420 a day and Goldshell was like Hurry, take pre orders for 50K KD6s before this euphoria goes away. And the rest is history, too many units, too many machines, not enough projects attracted to the KDA chain and were all sitting around with machines that may have been priced to break even in 18 months to actually losing money daily before they ever ROI. Hopefully KDA goes back to ATH because I’m in deep with the rest of you. Difficulty will continue this ramped pace. At some point I hope we’re all LFG!!!

Lots of hashrate coming online will decrease profits for miners. This is why it is important to get the best deal possible if you want to make any money.

Yes kda is a very hyped up project and with it being early stage many have jumped on that train decreasing profits for all. Also I believe kda structure reduces pay out every year by 50% so when I first had a kd pro box it made 2.3 kda per day. Now it’s .8 or .9 but if you look back over it in one day it went from 2.3 a day to 1.2 ish. So between popularity and the pay out structure of the coin. I’d value a kd6 se at say 4000$ and a kd lite around 2300$ when you take all these things into account, but I didn’t have this information when I purchased mining rigs so we live and we learn. Many other exciting projects out there. Just have to take the time to research them. Wont make much profit per day but perhaps with patience it’ll become a lucrative investment

Mining is like an arms race. A year ago, if you could get one, a KD Box was an affordable way to mine KDA. With my three boxes I was mining 10 KDA/day. Now with the advent of new and far more powerful miners, the hashrate has gone up. Nothing particularly unique about this scenario-just ask any BTC miner.

I guess my point is that yes, mining is an arms race. I’ve said the same thing before in the past within other posts. But it just seems like technological obsolescence has become a lot more rapid for KDA mining rigs given the rate at which difficulty has been increasing compared to other PoW coins. Goldshell and iBeLink appear to be selling an awful lot of “shovels” to miners who are ignoring today’s math.

There is a dude on YouTube that build a 2mil KDA facility. He keeps adding.

Someone was saying the rapid increase of hashrate might be bitmain setting their new KA3 to work ar their factory, and that we would se a drop i hashrate when they begin shipping out the miners, untill they are put to work at their new owners. I surtenly hope so😜

Need to fi d a way to overclock or auto tune