Everything written by TechnoColor is true.

Same here like rorovosk. The order has been cancelled without any reason and they didn’t ask some wallet address for receiving the refund (the payment was made by coinbase commerce).

In this moment, we are just waiting for the 30 days to pass I think, because they have that paragraph in the terms and conditions. Anyway, it will remain the same question, how it is supposed to receive the refund if the didn’t ask for a wallet?

What should we do?

At least you have hopes of a refund. Not so much for us. They claim it’s a shipping problem and it’s up to me to figure it out. Yet the shipper says they never got the package to ship.

Yesterday, I winessed LiFiAndy banning another romanian guy just for speaking. This guy was as fair and respectfull as he could, polite and spoke the truth about what’s happening with LiFi.
Instead of receiving a reply from Andy, he got banned as fast as possible, so noone gets to read.
This proves how right he was. The truth hurts.
He said his order got cancelled for no reason in an email from the lifi team and we can refer to the xenophobism that LiFiAndy demonstrated in his announcements regarding cancelling all orders related to Romania. As mention, romanians were banned because, after they bought tokens, they dared to sell higher…omg…isn’t this crypto!!! Then they were forced to stake for 30 days their tokens and after that LiFiAndy got mad again and extended the period to 90 days for Romania only. There is no such thing in crypto. Rules change as fast as Andy’s mood change, he’s like a woman on period. He closes and opens the dex as he pleases and you have to DM him if you want to sell, to open the dex for you, but still he would put limits on how much you can sell…wow!
The group has also romanian moderators, living in UK, the ones who spoke against their romanian fellows, to suck on Andy’s titty and perhaps having some benefits from it as long as they are not in Romania.
I managed to take some screenshots as fast as I could, didn’t even finished reading at that time, because I knew he would ban him, as it happened before with others who dared to ask questions about their orders. It is a habbit. Didn’t wanted to post this, but here we are, more people are getting banned every day. This Andy cancells orders and resells them again and again, making fraud money.
It’s an antidemocratic atmosphere, where there’s no right to speech, as this guy said in his comment.
You can feel his frustration, being banned for telling the truth, though he didn’t do anything wrong and kept quiet. He’s not even active in the group, i don’t recall seeing him typing anything.
This guy is right and I think this is a dommed project and when it fails, maybe this Andy realises that his attitude and the obsession for total control was the reason.
As a project leader you get used to get some hate, but God, this Andy, can’t manage his anger and takes decisions on the spot, changing rules as he pleases and banning people from tbe project for absolutely no reason. It’s a total scam and people who get thkse minimum earnigs every day are Andy’s cover, his tool to prove he’s not a scam. Dont trust this, dont invest.
I’ll keep you updated.

Looks like these poor guys are not getting their money back. 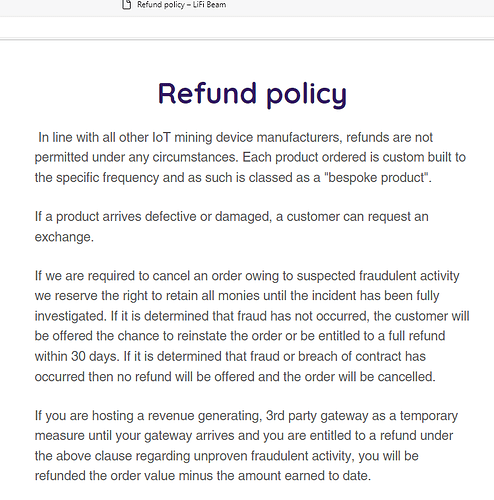 The title needs to be changed. It is definitely a scam. People either do not get product or they get it and then they do not receive any earnings.

I saw one guy posted that he ordered 3 milesight gateways but received 3 moko gateways instead and was told to take it up with shipping company instead of LIFI. After few seconds he was banned!

Poor people who are in the scam they think they will make their money back somehow while only 5-10% have made their ROI and rest are just struggling, a paradigme example of pyramid scheme.

More lies from “Andy” at “LiFi”

“Andy” now resorting to posting pictures on discord of disgruntled customers. Coward move since those people are banned and cannot defend themselves there.

Yes I’ve heard of folks paying for a Milesight and getting a Moko instead.

Andy can’t be honest with anyone. 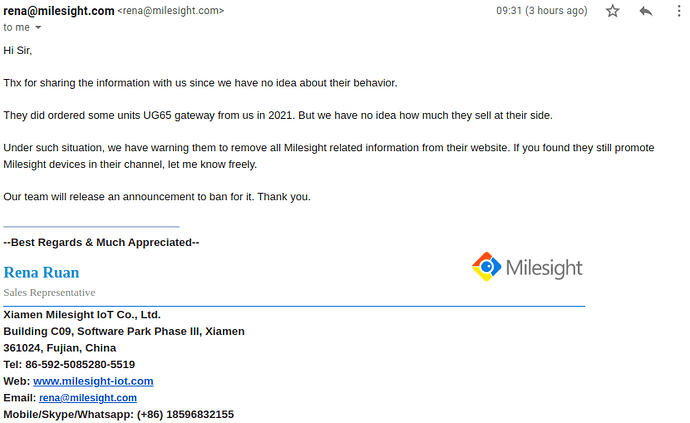 Hello,
THESE GUYS HAVE TAKEN 50K FROM US! AND WE WERE DUMB TO FALL FOR THE FOMO!
Have an email trail and screen shots of LiFi team giving my team the run around for delivery and refund.
First they stated that we gave them the wrong address. When I showed them a screen shot of their incompetent discord manger LiFi Andy confirming address, they simply said we are not playing the blame game… ???
They would not share shipping information at all either even after all my team members emailed the shipping and finance team numerous times before they lied to us and told us that US customs shipped it back to them because they couldn’t contact us because of incorrect information provided… that’s not how customs work… and we have screen shots of LiFi Andy confirming everything was good to go!
First they responded with “US Customs will reach out to me”…? Not true and not a real practice that happens in shipments. If there is an issue with shipment a BOL should be provided for import agent and shipping agent to locate the order… THEY WOULD NOT PROVIDE THIS!
The second response we received was one team member who made the mistake of replying to us with “will send over first thing” we never heard from that person ever again lol even after numerous emails replying to that email.
GUYS ITS NOT A COINCIDENCE THAT EVERYTIME WE WOULD ARGUE WITH LIFI ANDY, THATS WHEN THE SHIPPING TEAM WOULD REPLY. GUYS ITS ALL LIFI ANDY IN THE BACKGROUND LOL HE DOESNT THINK WE KNOW… WHEN I CONFRONTED HIM, HE SIMPLY STATED THE EMAIL WAS FORWARED TO HIM… IM SURE IT WAS BUDDY LOL
They have taken 50k in total from us and friends. They banned us from discord when we questioned them…
We are already in process of legal action. If anyone would like to add their issues to ours, we will be speaking with my attorney and NSA this coming week. Please reply here with best way to contact you.
Regards,
MP