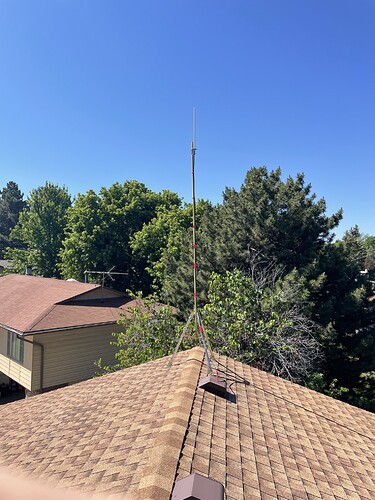 I bought LMR-400 coax for 2.4 ghz antenna’s because it is low loss for microwave frequencies. 915 Mhz is much lower a frequency and 16’ is nothing. The shorter the better, as you may lose 3db in a 50’ run.

I have rp-sma to type N connectors too and have tried many different antenna styles. By the way, your antenna is tiny (honest). If you were in the middle of other hotspots you would definitely want an omni-directional antenna with enough gain to communicate with the other hotspots.

Being that I live further away from a series of hotspots, all in one direction, I may find a high gain directional antenna best in my situation. Interestingly, I have placed a dipole at the focus of my 1.2 meter parabolic dish and established communications with hotspots (wifi) many miles away.

Nice to hear from someone who knows what the best connectors and cables are. Now then, I have a couple of amplifiers that could be tuned down to 915 Mhz…Imagine that!

Does any one have a good place online to buy antenna’s. I just ordered a Bobcat and I live in a 2 story would just like to put reg one that comes with it outside because I don’t have a good window but live in a town without big building. Would only have to run like 10’.

This is an Omni directional antenna, and it is an 8 dbi. It is the antenna made by RAK. Is there another antenna you recommend that is bigger? Thank you for the feedback!!

Doesn’t have to be big considering the wavelength is the speed of light divided by the frequency.
You could make a Yagi antenna with a dipole made of two 1/2 wavelength pieces and a reflector dipole behind it a quarter wavelenth or so and director dipole in front of the driven element.