Hello, I’ve always been a quiet reader so far.
Today I created an account to tell you about miners.de.

In February I pre-ordered an A11 for € 20,300. The delivery should take place in June.
Before ordering, I had personal contact by phone and email. I always got replies and the people on the other end were real!

On July 21, whattomine reported that Innosilicon had stopped production.
I asked directly at Miners.de. I was told that they will have more information by mid-July as the situation in China is complicated.
Now yesterday I sent another request and I was offered 2x A10 500 MH for my money.
Of course, I had to decline this offer, as you could get a lot more for € 20,300! After canceling the order, I was told there was no refund, so I should get a lawyer! 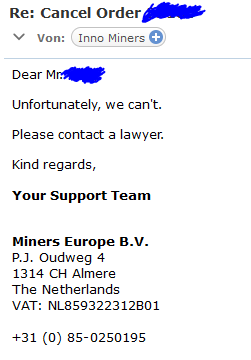 They are trying to do the same to me.

Getting a lawyer depends on the terms of the purchase agreement. If the terms note there are no refunds then it is very unlikely you will get a refund. Not sure where you are but in U.S. & Singapore law as well as most “western law” a court or the legal system will ALWAYS first uphold the terms of a contract. Under the jurisdictions noted above a contract is treated equal to law. It is only when one or both parties of a contract “act” outside of the contract that the laws of that jurisdiction is then considered. Having worked within contracts longer than I care to mention it is very rare that either party will want jurisdictional law to prevail as it is often general and based on precedence that may not align well with your case.

If I was in this position I would read the purchase agreement and see what options were available to me. This will most often be different that what you “want”, but first make sure you understand your right and remedies within the contract.

Then I would try to negotiate a little better position. Maybe additional PSU’s but make sure it is something they actually have. In most cases time is most important, point being your money has not worked most of the year. With hash rates increasing over time I would want to get my capitol working as soon as possible.

I recently bought an S19 Pro from a Chinese supplier and am in the process of buying 10 more from the same supplier. Having lived in China and SE Asia over 7 years doing business with SOE’s as well as Chinese suppliers I have a good understanding of their business practices. This along with the ability to have someone visit them “may” give me a small advantage.

Whatever the amount as soon as you click send payment you are relying on them to perform, as well as their suppliers.

One other thing. If the miner is not commercially available the supplier cannot under law be required to provide it. At this point you will then fall under the terms of the purchase agreement. Again I would try to get as much value in mining equipment as I could for the money already spent. I note additional power supply above because the markup on mining supplies can be as much as 200%. So if you could get some miners + other materials you would be doing good in my opinion. Meaning they should be more open to give you additional supplies as they do not have as much money invested in them.

Good luck in resolving this matter.

hi where are you located ??

wherer are you located ??

Thanks for your answer, I’m already talking to my lawyers. They say I am legally entitled to the money, but it will be difficult to get it back.

Located in Germany, 5 hrs away from Almere, where Miners Europe is located

Why not pay them a visit, shouldn’t you be cover by the EU distance selling laws?

I would have appeared there long ago and would have personally checked that everything was going well, but at the moment you have to be quarantined for 10 days when you return from the Netherlands to Germany…
Yes, the EU distance selling law applies in this case.