Some notes on the MXC M2 Pro miner I gathered on #mxc-m2-pro-mining in the last while.
LMK if anything is incorrect, this will be converted in a Wiki in a while. 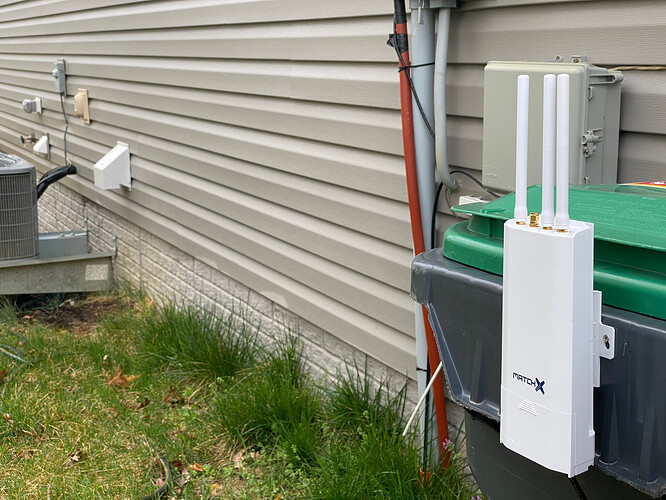 Where can I buy it?

You can buy it using this link. The promo code ‘VoskM2Pro’ will give you $50 USD off.

How much will I make?

You will get $10-$14 in MXC value per day. The exact number changes based on the current MXC price. If MXC rises in price you get less, if it drops in price you get more, therefore you get a consistent $10-14 a day in MXC. Example here

Note, this is the case for mining MXC only.

Depends - under change with the ‘miner fuel’ changes recently

Other updates such as AMA’s go here:

Will it interfere with a Helium miner?

You can have an M2 Pro miner and a Helium hotspot miner at the same location without any interference or profit concerns.

How is it different to Helium?

Same band but different model - Helium has Proof of Coverage, while M2 Pro is Proof of Participation
ie. you can have multiple units in same area (for now) - participating gets you rewards (for the time being), it also does multiple coins.

The M2 Pro currently tries to achieve a consistent payout - see ‘What is it?’ above

Can I have more than one M2 Pro in a location?

Yes - this does not currently operate like Proof of Coverage (like helium), therefore you can have as many as you want in one location.

How do I stake MXC?

How do I earn/bond DHX? 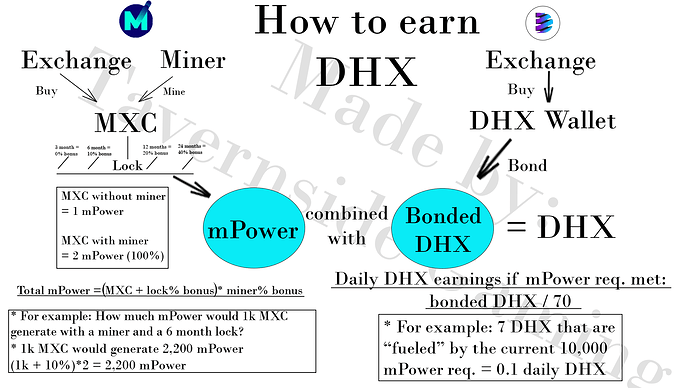 @TavernSideGaming made a similair one here:

Talk to me about mining BTC

What is miner health?

Miner health or fuel is a term that started getting a mention in mid-May 2021.

You shared your feedback and the MXC team is going through all feedback, your tweets and beyond from the online community, we are determined to be as transparent as possible through this entire process of this new feature and wand to thank all of you for letting us take the time to make the necessary updates.

Where can I exchange MXC & DHX?

How far can the M2 Pro Miner Reach?

How can I get refund?

For refunds you contact awesome@matchx.io with your invoice numbers in the subject line

Is this a scam?

This is for you to decide - however, some open-ended opinions collected over time from multiple sources are listed below which could possibly have been misunderstood or misinterpreted,

The average power consumption to mine this quantity of BTC was determined to be 60 watts per miner over the course of 30 days, resulting in a calculated average of close to 2 watts per day.

Watts is a consumption rate so the quoted text makes no sense. It is the equivalent of saying that I drove 60 miles per hour in 30 days.

Are you picking up a m2 pro miner @killtheplanet ?

To address a few things. First, I am licensed by the FCC with a General Radiotelephone Operator License. This license allows me to install and repair radar and radio communication equipment on ocean going ships and aircraft that travel internationally. This is the equivalent of a Master Electrician License for Radio. I have offshore experience in oil and gas exploration and 3D seismic navigation. I also have experience installing mobile private communications radios for Texaco using the 800Mhz - 900Mhz UHF bands. I installed 3 repeaters that were up to 90 miles apart with antennas on 50ft towers. The power output was 20watts. The mobile radios were also 20 watts of PEP in order to reach the repeaters from long distances. If given enough power and elevation, the M2 Pro could reach long distances. However, at 1w PEP you are limited to about six miles.
About Miner Health. It is a pyramid scheme because there is no cap on the number of tokens necessary to reach 100% health. If the cap was 100 tokens, that would be reasonable. All is required is to keep 100 tokens “staked” in your M2 Pro to obtain maximum earnings. Because every token mined must remain in the miner for 100% health, it is a pyramid scheme. For Americans, every token mined is taxed as self employed earnings thus withdrawals are necessary to pay the taxes. The MXC foundation now requires all withdrawn tokens to be placed back into the miner in order to obtain 100% miner health. That means a miner would have to purchase MXC tokens to achieve this. Since every token mined must remain it becomes a never ending cycle. As earning increase, so do the taxes owed and more tokens withdrawn. If there are capital gains, those taxes must be paid also. Even though Miner Health is now proposed as only a 50% penalty on earnings, it is still a never ending cycle and thus a pyramid scheme.

Some people are questioning whether this Miner Health fuel is actually a pyramid scheme. When you start doing the math, it becomes quite clear. Keeping “fuel” in the miner is not a staking agreement. There are no rewards for staking x number of tokens. What is demanded is the “staking” of all tokens mined to maintain 100% earnings.
So you have two M2 Pro miner owners. Miner 1 has 10 M2 Pros and Miner 2 has only 1 M2 Pro.
Miner 1 has been mining for a long time and now has 100,000 tokens split evenly between the 10 M2 Pros. 10,000 tokens for each M2 Pro. Miner 2 is a newb and only has 100 tokens in the one M2 Pro. At present they have 100% Miner Health with full fuel tanks in all the M2 Pros. Each M2 Pro earns $12 a day in rewards. Both choose to withdraw 10% of all their tokens. Miner 1 withdraws 1000 tokens from each M2 Pro while Miner 2 only withdraws 10 tokens. With a 50% penalty each M2 Pro is penalized 5% of earnings. Now each M2 Pro only earns $11.40 a day. Miner 2 chooses to buy 10 tokens and bring the fuel back up to 100%. Now Miner 2’s M2 Pro earns $12 a day. For Miner 1 to refill the fuel tanks, 10,000 tokens are required to be purchased, 1000 tokens for each M2 Pro. Miner 2 only had to purchase 10 tokens to restore earnings to $12 a day while Miner 1 is forced to purchase 1000 tokens to restore the earnings for just one M2 Pro to $12 a day.
Now do you begin to see the pyramid?

I think I have finally wrapped some of my head around what MXC is getting at with their miner fuel . I will say that it’s taken watching several YT videos from people in the community and several folks in our Discord for me to understand it. There is a lot of vagueness and lack of transparency in regards to communications that have been put out by MXC including their AMA, videos, communications on Telegram, etc. This does not inspire confidence in their project. Furthermore, to hear as an investor (since that’s what those of us are that purchased M2Pros) that we are penalized for withdrawing MXC from the DataDash app is disheartening. The whole idea of miner fuel is that you have to keep 100% of your mined MXC in the app in order to stay within the $10-14 profitability. If you withdraw part of that 100%, then you have to buy additional MXC to bring you back to 100%.

All of this being said I invest in crypto because I want to avoid the red-tape and smoke/mirrors of typical bureaucratic bs and hope for transparency and clear communication. I am not seeing that from MXC.

Thank you for laying this all out Barry. I appreciate your insight and expertise.

RIG side perspective, take profits destroy a card and in order to get that rig to 100% performance we have to buy another card that cost the same as the profit we take out in the 1st place… Thats is how i see this… Makes no sense… Ofc high profit cannot go forever but punish for take profits is other history.

The MXC project has turned into total FUBAR. The recent “rules” imposed on miners especially Miner Health fuel puts this entire project in jeopardy. Charging 700 MXC to withdraw tokens from the wallet is a complete ripoff. A lot of the conditions early on did not make sense for a radio project. Close proximity, having multiple radios next to each other, the complexity of the token exchange structure with DHX, using buzzword terms such as mPower, and the like.
I demonstrated in comments above how Miner Health fuel is a pyramid scheme. My example is simplified but based on the comments by Siwan on the “1 on 1 with Mo” AMA published June 11, 2021 and modified for the backtrack to a 50% earning penalty published by MXC on June 14th, 2021.
To put it bluntly, pyramid schemes are illegal in the United States, even with crypto currencies. I expect to see an SEC investigation and an FBI investigation for financial crimes on this project. I also expect the MXC token to soon be banned in the United States because of this situation. The FCC can order all MatchX M2 Pro radios shut down if their use is involved in crimes or fraud.
I hope the M2 Pro can be reloaded with firmware that supports the Helium network instead of becoming E-waste. There is also a chance the M2 Pro could be sold on the secondary market in Europe or Asia but I don’t think US owners are going to recover their $3000 easily.
I don’t really understand why the MXC developers chose to impose such harsh rules on miners other than their calculations on the viability of their project was totally wrong. This latest manipulation demonstrates that this project cannot grow organically in free market conditions. These are signs of a massive dump of the crypto and attempts to leave miners holding a bag of worthless tokens while those running the project cash out and flee to a tax haven without extradition. What a mess. Not the first time this has happened. Won’t be the last either.

My problem with the project is that sudden changes can drastically change the plans you had for mining. I convinced my wife to get 4x Miners, not a cheap investment of $12,000 USD… My plan was to put mined MXC from my wallet into DHX Bonding, but now thanks to Miner Health, they literally made me have no reason to keep more than one…

If they could fix their transparency issues, be a bit more honest, and actually work WITH Investors into their tech, it could still potentially be a great project… But they NEED to drop any representatives with ego/arrogance, and make their user base happy. 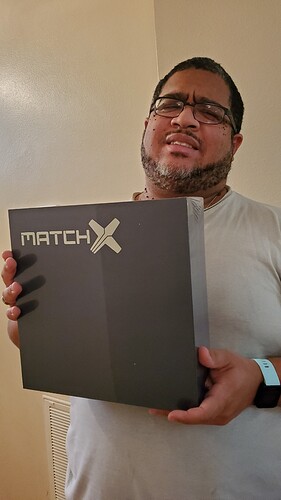 I’m sorry for you. I don’t think this situation is going to turn out in favor of miners.