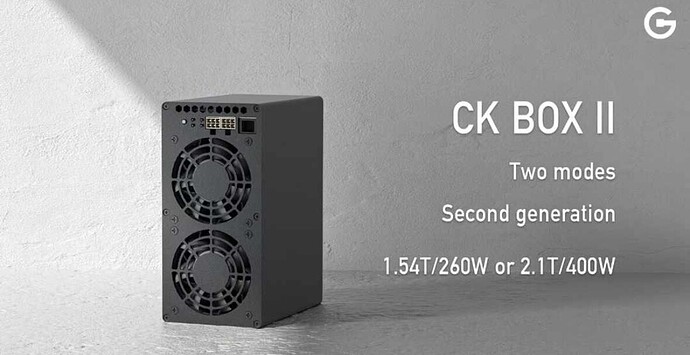 300 the most. the new bitmains when they get released are gonna blow these things out of the water.

Sadly this is just two old ck boxes combined into one with a low power mode.i really wish i wasn’t such a downer but sadly, im not sure if goldshell can stay afloat without at least matching the Bitmains new heavy hitters,let alone exceeding them but again the arms race that that would invoke would destroy mining for all but the apex predators.Bitmain have gone for the throat as all competitors do.best of luck guys

Oh, too bad, another money-losing endeavor…I got into mining and I was starry-eyed and baptized in the faith, but then the technology improved, inflation went out of control, the bottom fell out and my investments turned into bad decisions.
Luckily I was able to sell everything off and lose less money than trying to ride it out.
I’ll try growing vegetables.

Can I ask if you got out of it y are u still here just wondering? Most people that get out of things normal leave a chat

I still hold cryptocurrency.
I only sold my hardware because it was a money-losing endeavor.

yeah bro ,im hearing ya.i thought i had really done my homework ,crunched the numbers,run the sums,and was happy to invest alot of money in a fleet of box miners and was also happy to make a reasonable amount without setting the world on fire. the one thing i hadnt accounted for was the enormous efficiency increases which would inevitably be my undoing.but im ok with it. i really couldnt plan for something that at the time i had no idea was going to happen. but before i throw in the towel im going to investigate if i can run my boxes directly off a small solar setup, even if it is with out batteries and just during daylight hours.it will only generate a trickle but if i can get it to set and forget stage it may give new life to box miners. ( this all ofcourse depends on minimal cost to set it up. the whole lot only pulls 2.2ish kw.)

As I work the numbers over and over I come away with the same conclusion. I would have lost less money buying the coin instead of the miners.
I have a lot of hope for blockchain technology pulling back the curtain from the underhandedness of fiat management that plagues the world with boom-bust-war and inflation destroying my earnings over and over and over but miners are loud, hot, eat electricity, and are currently not profitable.