nVidia + AMD in the same PC

I saw several topics about mixed GPUs in the same rig but what about in the same PC?
Currently I am using a GTX 1070 but I have a chance to get an RX 580 - 8GB.
What if I put these in the same PC?
Does it (or even the nicehash) can handle these?

(One more thing. Any difference in mining between 4GB or 8GB cards?)

Probably not worth the hassle. I believe Eth has mostly moved into needing more than 4GB to mine, which is the most profitable GPU mineable coin typically.

Thanks for your reply!
So I should not mix the AMD with nVidia in PC? (Even if I only use the AMD for mining? I mean I would not use the hdmi or display ports for anything)

You really don’t want 4GB cards. You won’t be able to mine more mainstream currency like Ethereum. I do have nVidia and AMD cards, but on seperate rigs. I have heard of too many challenges getting them to coexist.

If you do want some 4GB, I have some to sell.

Oh, no, I just saw that I typed 4gb instead of 8gb. That’s why I did not understand the whole thing around 4gb. Sorry. (Post has been edited)

You can mix them just fine, I have a 1660 super and an 5700XT in my PC. I bios modded the 5700XT so I either use the 1660 super or the motherboard to run the graphics and leave the 5700XT just for mining when I turn on NiceHash. You can have NiceHash either run the cards on one instance of the miner or on separate instances, which is what I have mine set to. Any time I’m not actively using my PC, I turn on NiceHash and it’s mining on the 1660 Super (phoenix), 5700XT (phoenix), and my cpu (xmrig).

Thank you! That’s what I was looking for. Then I think I’m gonna get the RX 580 8GB and try it.
Any special settings? I mean the bios modding is neccessary or can I just plug and mine?
I’ve never modded the bios before.

@Warwolf
Thank you for your input. I’m wondering if you could walk us through how you managed to do that. Did you change any setting on the BIOS? If so what did you change? What motherboard are you running, and do you think those settings will work with any motherboard?
Sorry for all the questions, noobie here ^.^

you can run it without bios modding it, I haven’t looked into the rx580’s if bios modding helps or not, but 5700xt bios modding is pretty common for mining. If you’re planning on using the 580 to run graphics for gaming as well as mining, I would probably not bios mod it because settings for gaming and mining are so different, it’d probably be better to just use MSI afterburner and have a mining preset and a gaming preset to switch between.

@Chuy My motherboard is an Asus ROG strix z490E-gaming, the only Motherboard bios I changed was enabling XMP for the RAM, but I don’t think that affects gpu mining, it did increase my CPU mining by about 10% though. I did bios mod my 5700XT by following guides from RedPandaMining and HashRaptor on YouTube, and then playing around a little bit with my settings (listed above) to get it where it seemed more stable, I was getting quite a few bad shares initially and the settings would crash my pc every so often and I would have to reboot. The settings above have been very stable for me.

Also, one of the recent driver updates for the Radeon Adrenalin software really messed up mining on the 5700XT, the 20.11.2 update started giving me hundreds of bad shares a day, so I switched back to the 20.11.1 version and it was back to maybe like 4 bad shares a day. I’m hesitant to update to the new 20.11.3 and will probably hold off unless 11.1 starts going downhill for me. So if you notice a high amount of bad shares for any AMD cards, try switching back to 20.11.1
https://www.amd.com/en/support/kb/release-notes/rn-rad-win-20-11-1

Keep us updated on how it works out for you!

Thanks for your response. At the moment I just started using my gaming computer for mining, but it only has a 2080 ti on it im running it on a 3950x cpu, but at this moment i only do gpu mining since it is my gaming computer I wouldn’t want to start making my computer run slower because of cpu mining. I have been trying to get ahold of some other cards but its impossible to get them at retail prices ^.^ I guess I’m going to have to wait and hope that maybe by Feb. next year they will become available. I have seen some 5700XT at retail stores once in a while but I am kind of new to this and have read in some places you have to switch some things around in the software to make them work together with my 2080ti. My mother board is a crosshair viii and it has support for up to 4 cards that’s including the x1 slot. I didn’t mean to wright a whole paragraph haha, but if I do get a 5700xt and plug it into my board can I just start mining with both at the same time, or how could I make them work on the same board. BTW I am using nisehash to mine with my 2080ti.

You should be able to pretty much just plug in the new card and start mining on it right away, up to you on how much you want to tweak it (bios mod) to bump up the hashrate. I primarily use NiceHash as well - started with just my original 1660 Super when I built my pc in September (was hoping to pick up a 3080, but not lucky yet), eventually I picked up 2x 5700XT’s when BestBuy had them right around $400 for the XFX cards. The 5700XT’s are pretty large cards so my case couldn’t fit all 3 cards in at once, trying to run the two 5700XT’s was pushing the temp of the card on top pretty high, it was also before I had figured out better settings, so I returned 1 of the 5700’s and now just use the 1660S and a 5700XT, with the 1660S being above the 5700. Basically, as long as both cards will fit with your MOBO and case at the same time, you should be okay to mine on both of them. I believe there is a setting in NiceHash to have the cards mine together using one miner or separately on two miners.
What power supply do you have in your pc?

You can mix them dont bother trying to update drivers much though its a pain. I did this once with nvidia and amd but it would run pretty hot “In the PC” I would suggest using one of the PCI Express to usb3 4x adapters so the hottest card mining can sit outside of the case somewhere unless you plan to do some pretty strange water cooling setup. The RX580 8gb card runs real hot and only runs about 30khs I would suggest a RX570 if still viable most were 4gb I believe modded it could do 27khs with a lot less power draw. 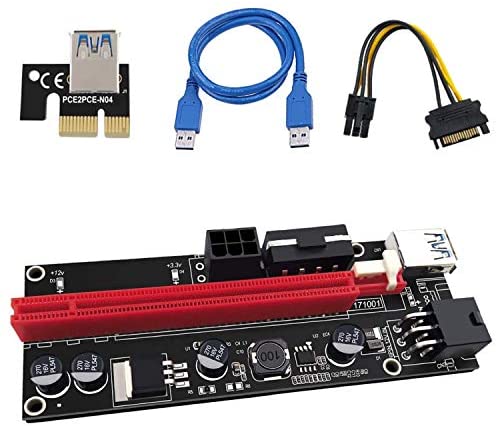 A 700-750 would be plenty, but your rig might be able to get by with the 500W supply you have, I don’t think you’d break 400W with those 2 cards. My 2 cards, mining on my cpu, and having both monitors on runs around 550W at the wall last I checked. If you are going to upgrade your psu, I’d shop around for a good deal on a 650-750W. If you plan on upgrading your cards at all soon-ish maybe go more towards the 750W end of that.

Thank you for the help guys!
Let’s roll. I will get back with some update soon.

It’s a old post but I’m planning in do the same thing. I have a laptop with a Nvidia GPU and I’m planning in add a Rx 580 8gb using a egpu. My doubt would be if you only installed the drivers and managed to mine without complicated modifications? Which miner are you using?
are you managing to mine with both at the same time?