Argue about ProgPoW and anything to do with Ethereum forking Here

I heard that Veil was considering moving to ProgPoW as well, but hadn’t seen anything concrete – dug into the Veil project discord server in their #announcements and found this 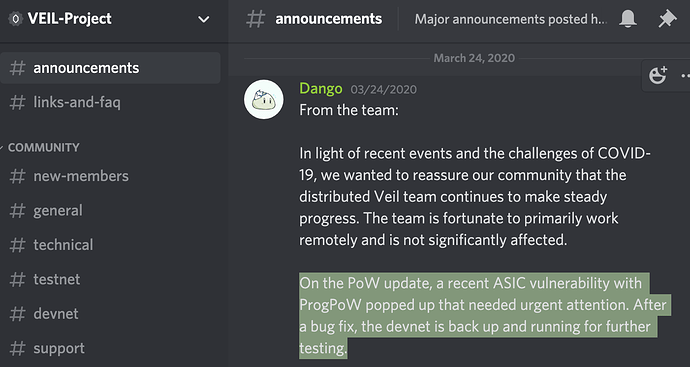 Not shilling veil, never mined it or have a single coin. Just wanted to share the concrete info.

Ravencoin RVN has progpow on their testnet, and Zcoin XZC is considering progpow over their MTP mining algorithm as well – all of this in addition to ETH dragging their feet along . .

EDIT 04/06/20
Here’s a quick update on Zcoin XZC & ProgPoW, Reuben is basically the Vitalik or Satoshi of Zcoin. Zcoin is clearly still interested in moving to ProgPoW, looks like they were waiting for support from OhGodAGirl aka Kristy. It appears it’ll be something they’ll need to implement themselves, and without outside help it won’t be a pressing matter for them. MTP Merkle Tree Proofs their current mining algorithm has held up much better than the other mining algorithms in the medium-term, hence why moving to ProgPoW would not be an immediate priority for them. 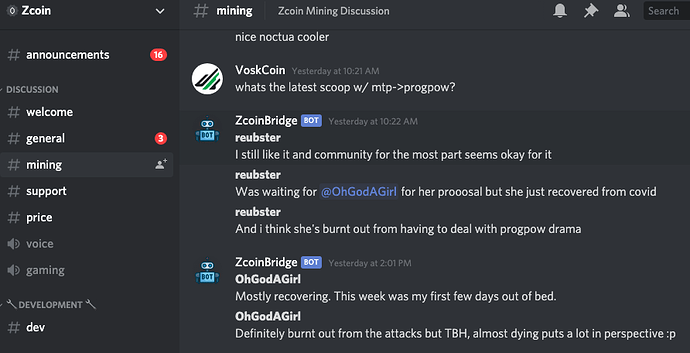 “There was enough of a risk of ProgPOW causing a chain split according to certain people that it seems to be have been benched for now” - Hudson Jameson from https://www.youtube.com/watch?v=pALXEBWDFn0

Other core devs are still working on its inclusion.

Im wondering if anyone understands ProgPoWZ which is what ZANO uses.

ProgPoW itself isn’t the mining algorithm, it’s an extension of ethash. As I understand it, ProgPoWz uses ProgPoW to extend cryptonote instead of ethash. They have a great community, try their Discord for details.