Banning someone on discord for doing nothing wrong, after losing over $4000, with other users, not only is unethical, it downright tells everybody what type of person you really are. I don’t know who the admin is that banned me, but his discord name has free bans in it. I’m trying to track down the person that claimed to steal over 75,000$ from people on YOUR server. I made “some noise” about it it seems, and people got offended, well, boo hoo, grow up.

Now I’m being treated totally disrespectfully, laughed off, and, I may have broken a server rule by using bad language or something, because I was naturally upset after losing money, and the person I was cussing at was in fact the scammer, gloating over what he’d done on another profile, I consider it lesson learned, no harm no foul, but, now I’m banned, for doing nothing wrong…and naturally I’m not going to respond well to people telling me I deserve to be stolen from basically, for no reason. I have nothing against anyone on the server, you, your videos are great, most of the community I met so far has been great, but now I’ve lost access in the ability to aid me in the task of tracking down the scammer so he can be brought to justice, I have plenty of evidence, and have already contacted private investigators, and local authorities. Also, I just plain like the server, I’ve learned a lot already, and voskcoin discord has been very valuable to me already.

This is not a joke. He also has my real name and address for shipping reasons and has threatened me personally. I am simply requesting an unban for the discord server.

First off, I personally didn’t ban you, second off, this is an incomplete story.

If you’d like to share the entire story perhaps I could possibly help, but the fact you show up here basically shit-talking me, along with simply false accusations, makes me feel less than inclined.

Regardless of anything else, this is why you were and will remain banned. 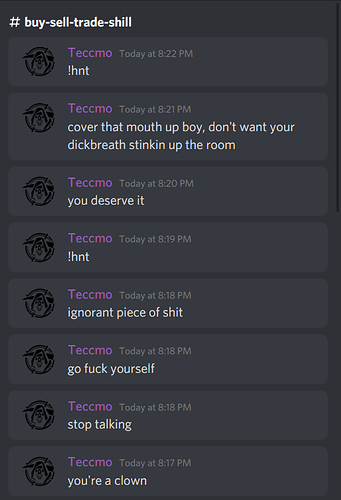 Yeah, no place for people like that in the VoskCoin community.

Hi i was banned from the Voskcoin discord, I don’t know why. Please can you kindly un-ban me or help me get unbanned. 57escape#9281

have any idea why? I’ll send to mod team

Oh I see, I am really sorry, I was not aware of the rules when I joined. I would truly appreciate it if you would kindly unban me, I will not disrespect the rules again.