I always hear the ‘don’t use an exchange to hold long term’ and ‘not your keys’ - but the rewards on offer for staking on exchange have always been very tempting. So I never looked much at staking from a hot wallet. One time I checked out Exodus and figuered I’d rather get the higher returns at Binance or AAX.
Even before Luna, I split the bags around different exchanges on different tokens to reduce the exposure.
So now I have a some Earn plans at Crypto.com I can’t break, and some more at AAX I can’t break and AAX have pasued withdrals for all but 5 or so coins so even it I could it wouldn’t matter right now. The Binance ones I can break and move though.
I had a Zelcore wallet from when I had a Flux node, but I haven’t stumbled onto staking from there. Is that a thing?
I’m now moving everything into Exodus and Trustwallet as they both have options for staking. Mostly at lower returns than the exchanges, but better than I remember and with less risk.
I’ve got CAKE staked at Bitrue, Binance, and AAX now. I’m moving that to Trustwallet to get a lower, but still stupid high, reward. I’ve enabled all the coins that can be staked into Exodus so I’ll move the ATOM and ADA etc in there. I haven’t found a place to stake ETC from a wallet yet. I was getting 4%-6% between Binance and AAX on that. Is there a wallet that has that?
So if there are silly people like me who never looked much at wallet staking as the big shiny numbers at the excahnges were more tempting - this is what I’m doing. You might want to also.
If there is staking in Zelcore, or somewhere to put ETC that will earn, I’d love to know.
I try not to do too much token/coin conversion as every one is a taxable transaction and it’s going to be horrible working that out at tax time- even with Koinly helping out.

Personally I don’t have to much experience with staking, I’m a BTC Maxi. But I joined in … because…
I was lucky to have a Staking person I was able to fall back on, so I’m basically repeating what he told me.

Exchanges will likely have the best staking options and are safest. They communicate with Token Networks and often host or aid the Staking themselves and not just acting as an intermediary. He told me to prioritize on exchanges that are to big to fail, basically CoinBase, Kucoin or Binance. That said, the competition is fierce. So smaller node/staking groups will try to out do exchanges % rates with longer terms or other small tricks, such as combining 2 separate networks tokens into 1 Big stake. I felt kind of lost when he told me that so I asked for a direct reference. He told me Etrnl for ADA. So I followed the steps, set up a Google Chrome Extension Etrnl wallet, deposited funds which opened up all the staking option Etrnl provide. He told me look at “[RAY]” . At the time [RAY] offered higher % rewards than anyone else, and had a non-commitment Delegated Stake (basically, the tokens are mine, in my wallet and can be moved when ever, Or I can add tokens at any time that get auto-delegated into my Stake.

In this topic, when I was asking, we rolled into “How and Why”. It seems that much of Staking is revolved around Liquidity Pools and the volume of transfers for that token (or other tokens). So for ADA and [RAY] , it seems (it is a secret) that RAY makes the bulk of their gains by operating LQ pools on Sund for any token on the Cardano network. The more capital they have, the more LQ contracts they can fund. In theory it’s a growth system. until BTC 50%'s its price and Token Transfer volume slows. Then they just have a ton of assets wrapped into non-profiting pools. The saving grace is that they profit more , each cycle, than they pay out, so in theory they can cover losses until May 2024 (BTC Halving), at which point they start wildly profiting again, over payouts.

This explained why [RAY] had such better rates than exchanges. Most exchanges favor the ERC (ETH) network. Popularity and high volume. So ERC assets are a safer stake for the exchange, who can also diversify by setting up LQ pools for other ERC tokens. If they help a little ERC token, in theory, ERC as a whole does better and ETH price goes up, hence the Stake profits more.

Network favoritism is definitely a factor in Staking options.

So maybe take a couple ADA and explore the Etrnl wallet, maybe… if it seems to sound OK to you.

You bring up crypto.com (owned by VISA), Call it hunch, VISA loves the current market. Debt and % based profits are VISA’s game. They can loan themselves enough to cover all Staking options knowing those loans will be repaid when BTC halves. Loaning themselves any amount of money also does great for Stock Holders, as it gives a projectable profit/loss to be used to value shares and Stocks around VISA. My point, maybe get into bed with the Devil (crypto.com/VISA) because we know VISA will let the world burn before they lose money. Hopefully, by proxy, you also get those gains.

I have no doubt VISA / Crypto.com did wonders when CRO was $1 , now $0.03. Of course they liquidated, into the Stable’s they fund. Win/Win , Silvergate capital got the boost. VISA/Crypto.com invent CRO, people fund it, VISA then Liquidates to Stables. I suspect when CRO recently went for 3 to 7 cents, then back to 3 , that was VISA making good. They repurchased their own tokens at extremely cut rates. they pay 3 cents today, and pay out that 1 token as $1 in 2025. So when we cross this with Staking, They likely already own all the payouts already. I expect better % rates in the near future. They will want poor traders to double down on their dream.

While BTC aims to destroy and replace Federal Reserves, So does VISA, and Crypto is a nifty backdoor to achieve those ends.

Let me end by saying, I view Staking as flat out Usury. To me, Staking and Tokens are a circle jerk of volume and profits all based around taxing an unsuspecting User. AKA Usury (an exact concept BTC, Blockchain and Mining set out to destroy). But that’s all semantical conversation of Coins Vs Tokens. And I am a hypocrite, but I love crypto so I had to try.

EDIT/ADD-ON
So here is a map of Cronos. Notice the ERC wallets on the list? That is because all Cronos staking is joined onto ERC, Much like how ETH leaches off of BTC, CRO leaches off of ERC. And what is ERC going to do, nothing because Silvergate capital amd SSgA (VISA owners) back USDC , Like I said before , a big circle jerk. 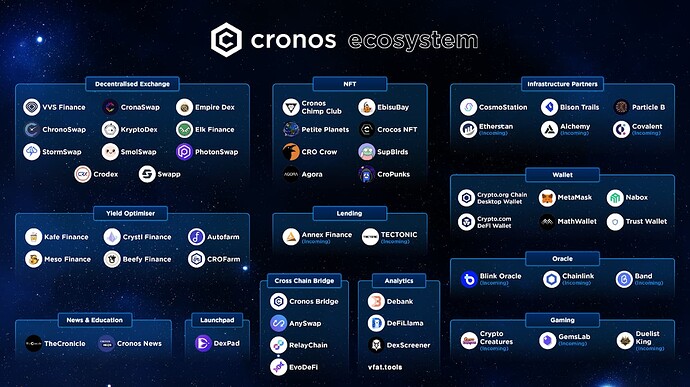 I know I’ve already commented (blabbed) too much, but I’m laying it on you because … info = profits or loses.

When people ask me about staking I usually refer them to the kings, with 1 simple question, which I now ask you.
Are you a THORChad?
https://thorchain.org/getting-started If you don’t want to be a THORchad, just read Erik’s Summary, it is the Jest of it.

Once THORchad is achieved/understood, I would then direct the conversation/topic towards KAVA network (kava.io). THOR is only 1 version, but give a clean explanation of LQ’s and Staking profits.
So moving onto KAVA, they have 4 tokens. KAVA, SWP (Kava swap), HARD (Kava Lend) and USDX (a Stable). I like them because they are smaller and easy to study. KAVA orchistrates loans (requiring a 10% deposit in KAVA), then gives the loan in HARD. The recipient then cashes his HARD into a usable currency. For the loaned person buying the 10% kava deposit, receiving HARD, Cashing out Hard, then purchasing KAVA to repay the loan all cycles through LQ pools. My crypto club actually tried (semi-un successfully) to track the movement volume of HARD and KAVA, then looked at the volume flow of USDX to try to determine the future price of KAVA token based on rewards paid back to KAVA via all the LQ pools along the process. By the best of our math, KAVA LQ pools receive approx. 2.5-3.5% back on the amount loaned strictly via the LQ pools. When you really eye KAVA it does seem they profit more from LQ pools than the actual loans they give.

Basically, KAVA would give a loan. Upon repayment of those loans, USDX takes hit and depegs. When USDX depeg’d to 93.5 cents , we knew that the LQ pools would pay out real soon to match the trade volume that caused USDX to depeg. So we buy KAVA, knowing once USDX-repegs, KAVA Foundation would then re-buy their own KAVA tokens to boost network profile and such boosting KAVA price. It played out close to what we expected, but the % gain of KAVA was dictated by the amount loaned, which we would not be able to know the details of.
If the loan was 10K , KAVA might go up 0.02% . But if the loan was 1.5 million we would expect kava to go up 1-6%, since that 1.5 Million traveled through about 6 LQ pools back and forth. At 0.01%-3% per LQ pool, that cut of 1.5 million adds up fast.

KAVA SWP is directly valued on the amount of people using KAVA.oi Dex exchange. The more loans they give, the more SWP gains based on usage of the DEX. Right now, KAVA seems to be stalling trying to stay alive until next Halving.