This Wiki is all about STEPN, the purpose of this wiki is NOT to re-write or regurgitate the Stepn White paper which is excellent and required reading before heading here but to supplement it with additional information as provided by the #Step’N Discussion Discord on the VoskCoin Discord server.

This resource was created because none existed at the time, I am most definitely a noob on this topic and therefore I rely on the community to keep this up to date, so, feel something was missed out or that you can contribute?

Feel free to raise a pull request or click on edit on the appropriate file.

Alternatively, tag @killtheplanet on the above-mentioned Discord on the VoskCoin Discord with your suggestions! 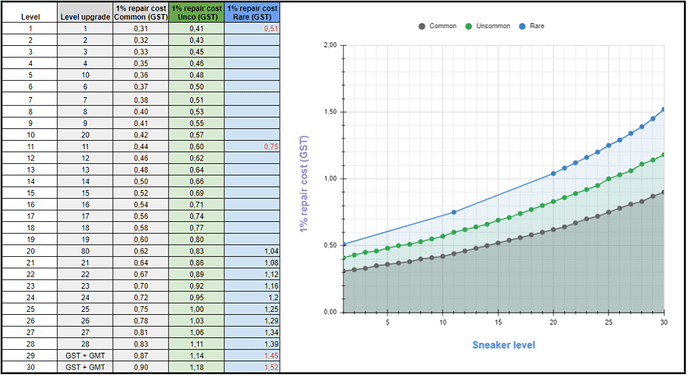 The Stepn Guide is a excellent resource that helps with ensuring your shoes have the maximum efficiency for a particular level.
The Stepn.Wiki site also recently popped up which does a similar job

Note: It has been said that this is only helpful for lower levels not looking at Gem sockets yet

A handy chart which shows the cumulative time and cost to get to a particular level: 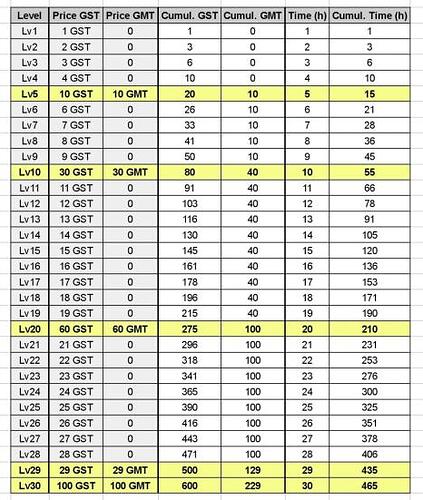 Health Points was announced on July 13 2022 as another way to improve price action. See the tweet 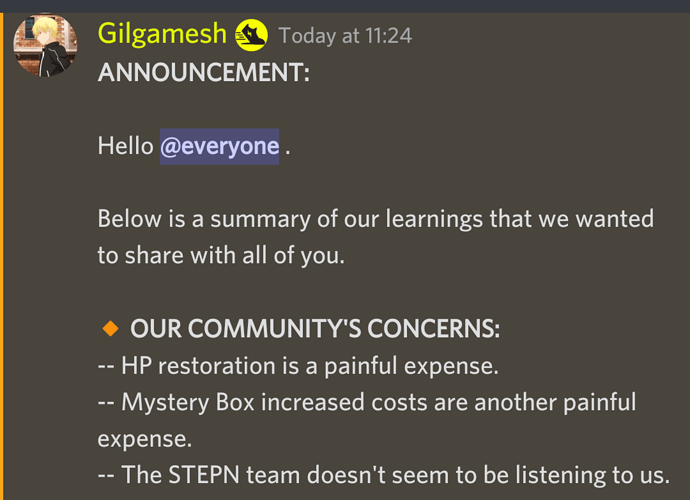 There is a good Minting Calculator that you can use, keep in mind that mint prices change daily at 14:00 UTC. 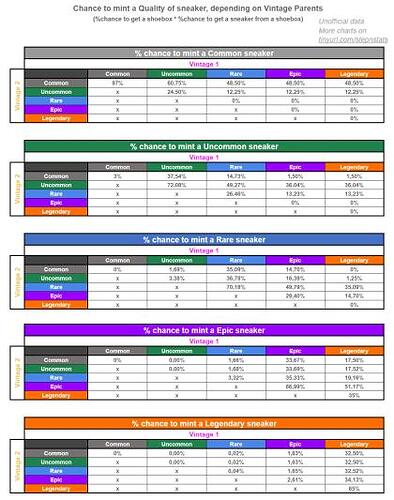 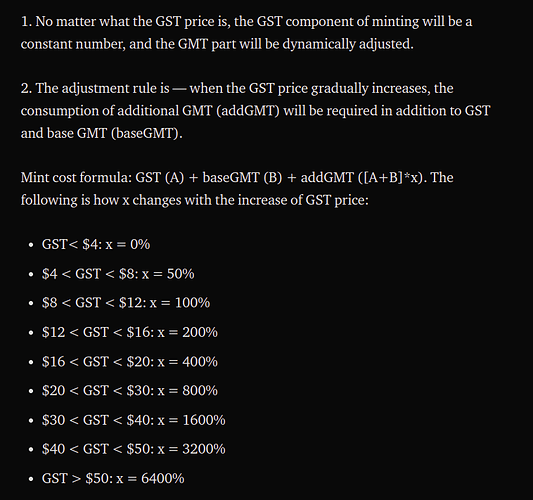 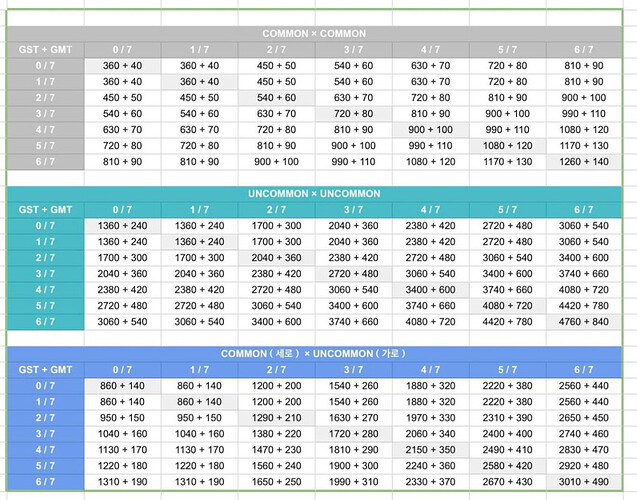 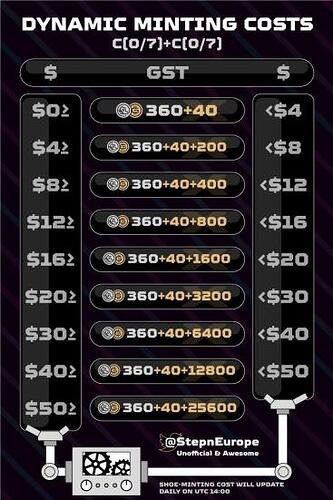 Below are pre-8 June 2022 changes purely for temporary reference:

Also note that mint costs also change depending on how many mints the shoes has had. 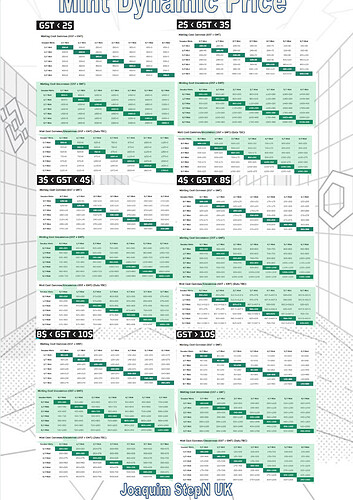 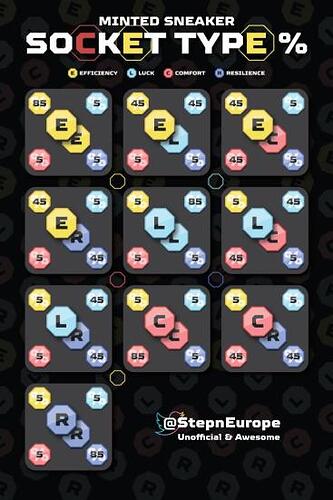 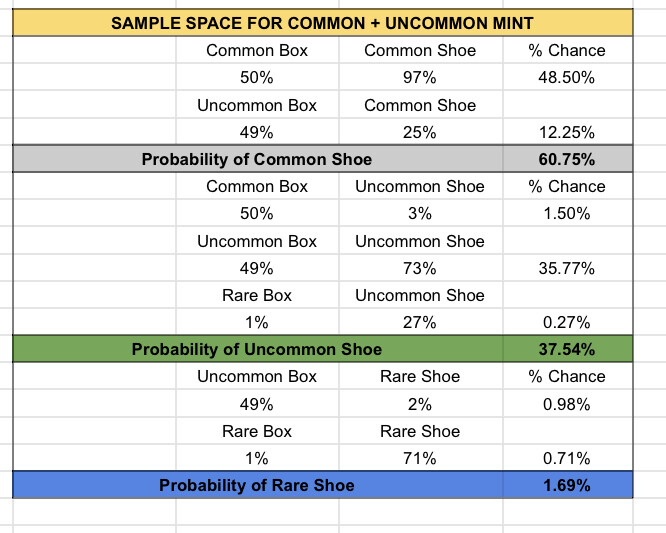 The original official Discord announcement had this: 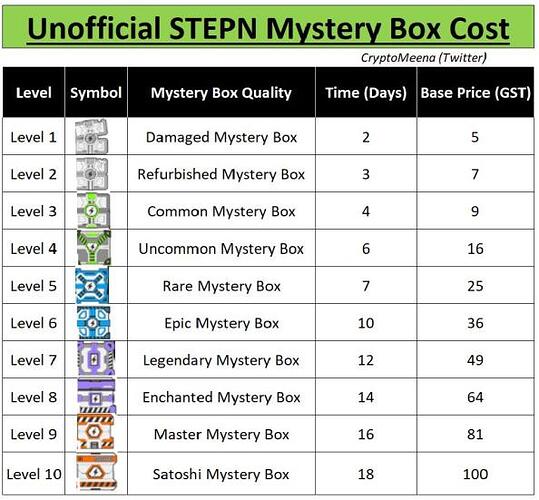 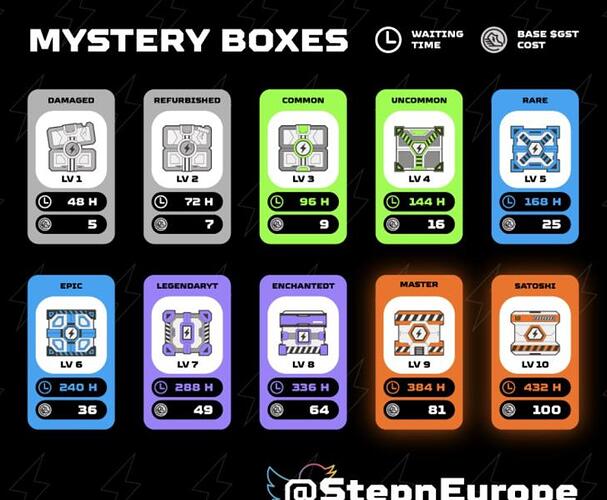 Seaker Synthesis/Enhancements was released around 20 June 2022

NOTE: I’m too noob to have done this myself, so completely rely on others for info 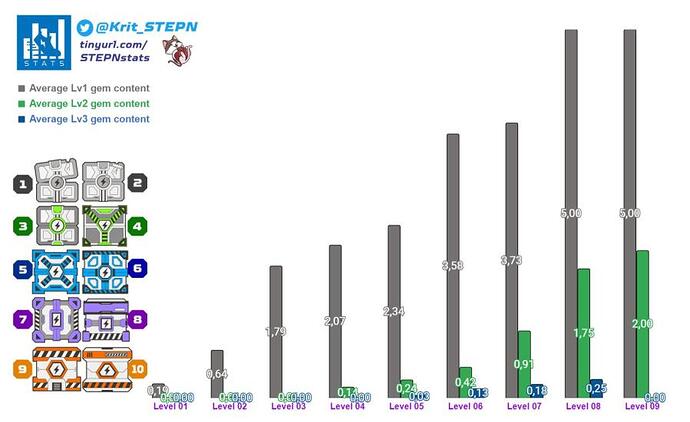 Here’s what has been found about GEM probabilities and costs: 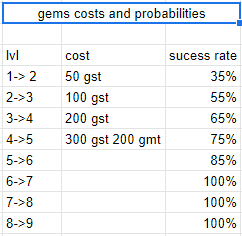 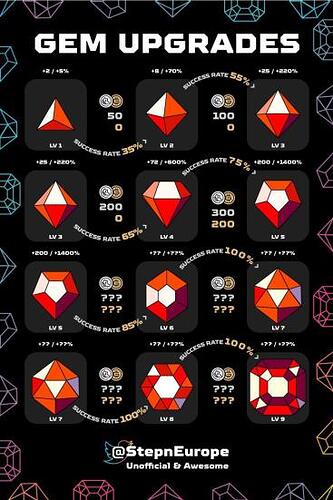 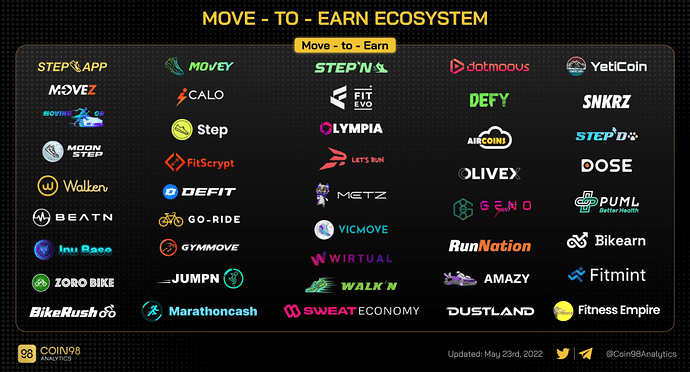 Basically you are assigned your character with random stats. Then it passively calculates
steps during the day and turns them into gems. Gems are used to upgrade your character.
You also can “battle” another person and you want to select your highest attribute to
participate in those as they are weighted the most. For winning those you earn their token.
WLKN. WLKN can be used to buy clothes and such which upgrade attribute points but you also
need them to level up as well. Like to go from lvl 0 to lvl 1 you need 1 WLKN (ty @BrokeAvgJoe)

One note to everyone, if you want: don’t level your dude until you have 20 gems and 4 WLKN.
If you level to lvl 1 you start facing absolute tryhards and it’s really annoying.
But if you wanna face rad chads, go for it 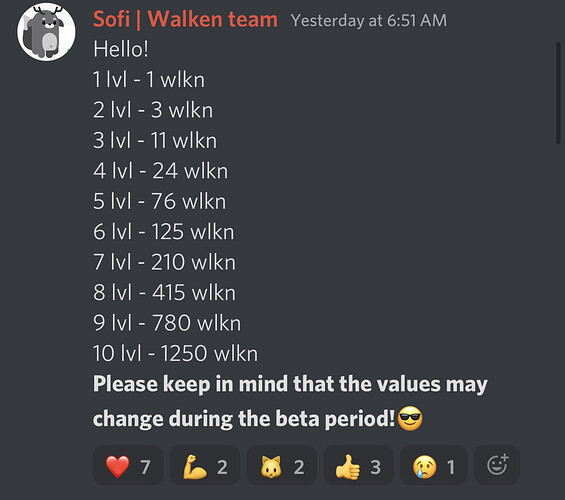 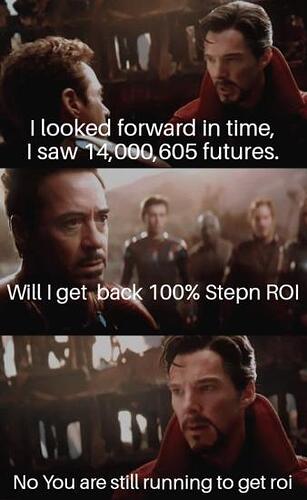 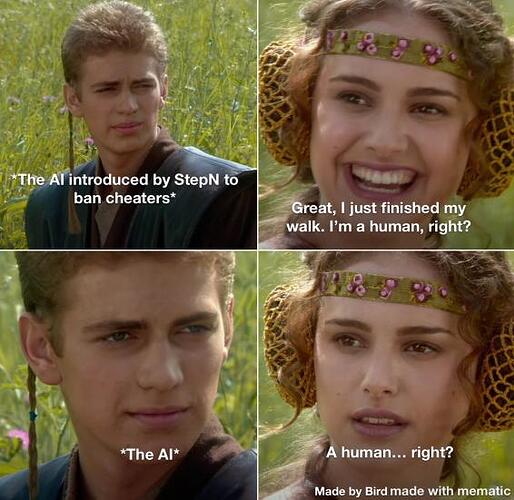 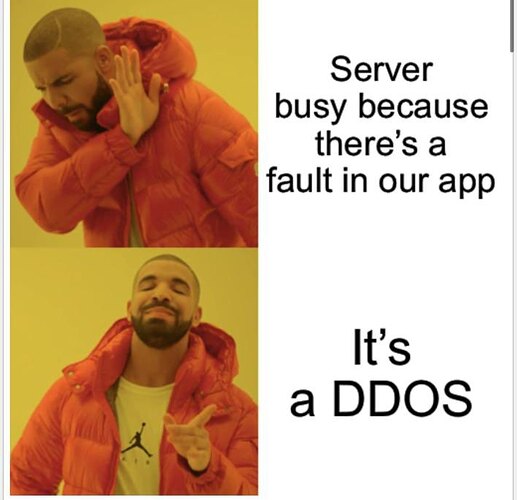 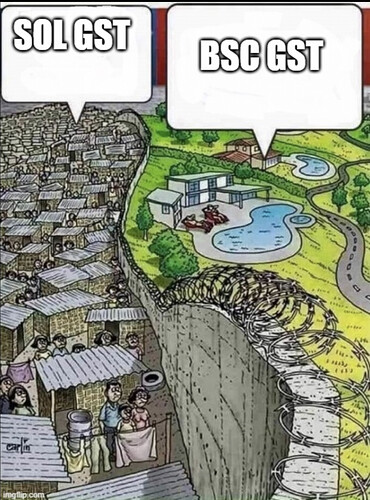 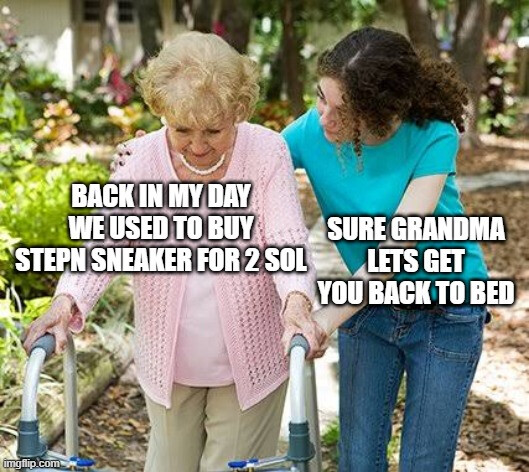 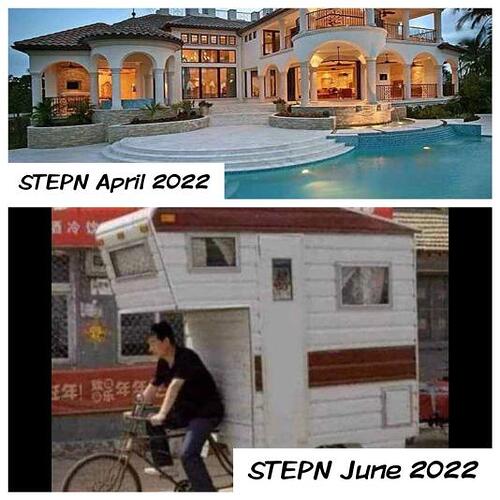 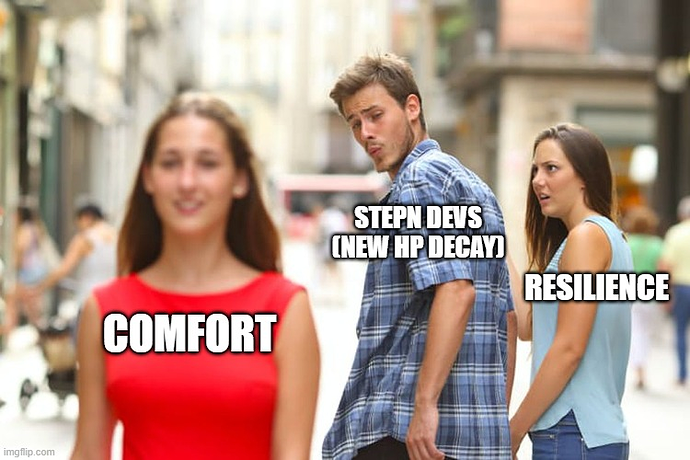 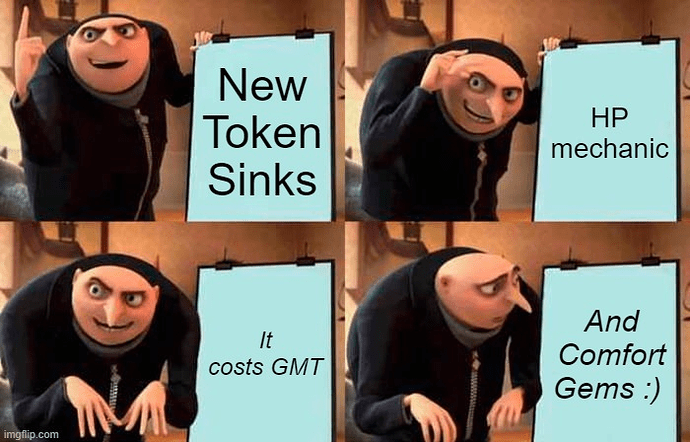 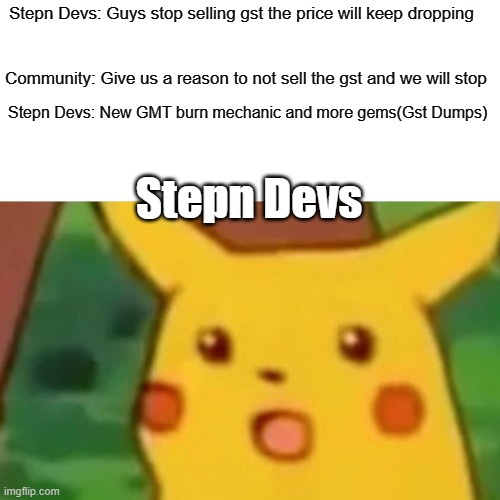 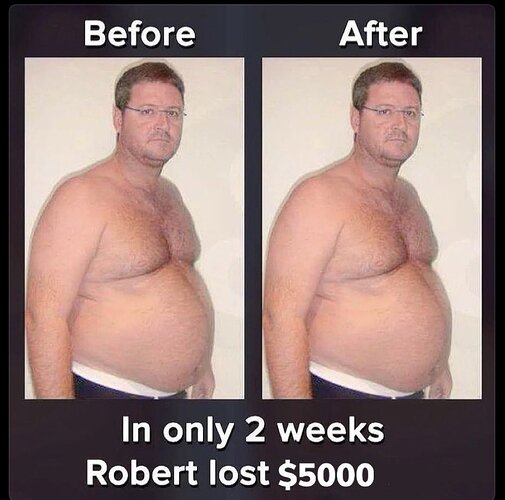 I want a invite?

Come hang out with us in the Discord channel as mentioned here.

Where can I find stats?

How do I get GMT?

Other than buying off the market, you can trade GST you earned in your wallet (once transferred from spending) and click the ‘trade’ button.

NOTE: If a trade is not confirmed within 30 seconds you will get a ‘timeout’ message - your trade may or may not have occurred then, best is to refresh the view (pull from the top down) and see if the trade happened, retry if it did not happen.

Can I trade points across shoes?

Why are my sockets different between shoes?

Where do cooldowns apply?

Is it illegal in the USA?

This typically refers to this section of the agreement:

By using the App or the Services you represent and warrant that:
you are not a current resident of the United States of America,
China (Mainland), Cuba, Crimea and Sevastopol, Iran,
Afghanistan, Syria, North Korea, Antigua and Barbuda, Hong Kong,
Thailand, Malaysia, India or Canada (Ontario); and your access
to and use of the App and Services is lawful in your country
of residence in the manner in which you access and use them.

That statement in the TOS doesn’t mean Step’N is banned in those countries. That is the list of countries that are pretty unfriendly towards crypto in general. The 2nd phrase is the important part “and is lawful in your country”

Also from their discord:

How does energy sharing work across realms?

Energy sharing was announced on the 8th June 2022 update and is covered quite well in the Whitepaper.

ohhhhhh KTP STEPN wiki guide, this will easily become the best resource for STEPN in the world lol

he needs to get stepn on that now

What a mad lad