Have my rig up and running with first GPU but I’m now receiving an error for the PCIE slot that the second GPU is plugged into. 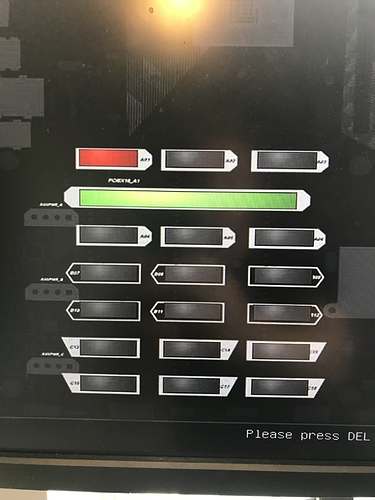 Any thoughts on a fix?

I’ve unplugged and replugged in with different PCIE riser pieces, no luck. Tried a separate SATA connection for the second GPU to the PSU. I’ve also messed with some of the BIOS but am still researching those settings.

Perhaps there’s some in the device manager section that I need to go to recognize the second GPU driver? I’ve installed updated NVIDIA driver that worked for the first GPU and second is same exact model.

Have you tried plugging the 2nd GPU directly onto the board to see if it works there? If it’s a problem with the card, then that would be one way to hopefully find out.

Hm yeah getting the same type of error read when I plug the other GPU directly into the board. Did it with the cables that are working for the functioning GPU and while the other one was unplugged.

Could be a bad card then? Possibly need to return it.

Yea, that seems more likely if it won’t start up in the same slot with the same cables.

try just using the second gpu only and see if it starts working. This should tell you if the GPU is the issue or a setting.

Wait a sec, are you trying to use the pcie slot on the board and a riser slot? if so i had issues with that in the past with biostar boards, try to use both gpu’s each on there own riser.

I’ve had additional cards not show up in device manager before. My fix was re-installing the drivers. In some cases you may have to use a ddu device uninstaller program … but I never did.

And phatminer, I tried both GPUs on risers and one onboard and one on riser as well as just the defective GPU solo onboard and on a riser. No luck and the working one runs any way you attach it.

Think I’ll try re-installing the drivers and then return for a new one if that doesn’t do it.

Swapped the card for a new one and the new one worked right away after reinstalling the drivers. Up and running with the 2 and planning to add more shortly