Total newbie here… Trying to build a 3 GPU rig with my son over the xmas holiday break… Got new motherboard, PSU and RAM… Using CPU, CPU fan from former gaming PC (CPU should be compatible with the motherboard.(… Installed the CPU, Fan, and RAM… Hooked up the PSU - 24 pin, CPU pins, and Sata… I have power to the motherboard (has led lights that light up, and i can see network connectivity when connecting a network cable for the port… But the motherboard will not power on to load any OS. Any suggestions ? hints ? Happy New Year !!!

Not sure there… If you haven’t already tried this, it could be something… strip down the build to only base components (motherboard, cpu & fan, memory, and only one GPU) and see if that powers on and you can see something on your monitor. If the motherboard has a built in display, try simplifying to only start there. You can add additional stuff later (like more gpu’s).

Check the power button connector location. Short of that take everything out except cpu and see if you get fan spin. If no action at that point you most likely have a dead cpu. You could try reseating it. The computer should post as long as the cpu is working. Problems after post can be addressed next.

Need more info.
How big is your PSU (watts)?
-GPU’s can run 175,250 or 400 watts each.
Are you 100% positive the CPU is compatible?
-if everything starts, screen flashes, buttons blink, then nothing happens, and if it tries to restart itself over and over - that’s an un-compatible CPU.

What Kind of Board?

find a Vosk build video and run his steps. If I had to wild guess I would first think CPU compatability , then Power supply limits.

Hmm last thought. That CPU , is it compatible with the RAM you chose? Check that on the CPU manufactures web site, same with the RAM, see if they list each other as “compatible” (DDR SDRAM, DDR2, DDR3, DDR4)

ehh , and you do have that 2 pin on/off button…? Look like a mini molex 2bar/pin and only has 2 wires? 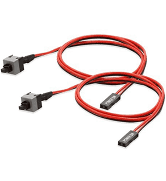 Try removing the CPU and reseating it. How much RAM… details… type of board, No lights at all after pushing the power button…?

@Sean_Harrison
Did you ever figure out what was up? Just curious.