What Kind of PDU do you Use?

What kind of PDU do you use for your ASIC miners? The ones that Vosk recommends have so many extra plugs on them when in reality I only use 1 or 2 per Breaker/PDU combination.

What companies do you like? What model do you use?

I think you mean frugal

IMHO, my setup is much cheaper than a PDU. Fwiw, when it comes to the larger, modern, high wattage ASIC rigs, you simply can’t get more than 1-2 rigs on a 30A PDU unless you’re willing to operate at the hairy edge, which is something I won’t do when it comes to electricity.

If you’re running a bunch of the Goldshell mini rigs, it might make some sense just from a wiring neatness standpoint. And back in the old days of mining, when most ASIC rigs pulled < 2000W, a PDU could make more sense again from an organization standpoint. Today, IMHO, not so much.

For those who want to run the math, I = P / V. I = current in amps, P = power in watts, V = voltage. Whatever the rated wattage of the rig, build in the manufacturer’s engineering tolerance (e.g., for Goldshell, it’s typically +/- 5%). I’d also assume 220V at the outlet rather than what’s probably closer to 240V for residential voltage (fwiw, in my garage it typically varies from 239V to 244V). Then bake in 80% factor of safety, e.g. a 30A circuit shouldn’t be loaded more than 24A etc. Easy peasy.

i use home made pdus , has surge arrestor watt meter & each psu has it own breaker 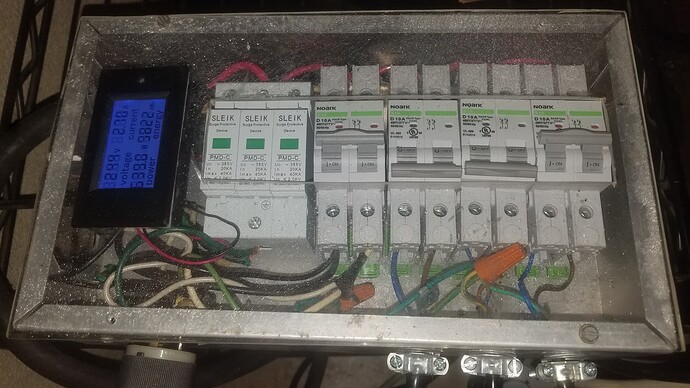 I will be posting up a few PDUs for sale soon used less than a month old before I upgraded to a bigger farm for hosting if interested, I have a few PDU from tripp lite, and asic miner panels that are sitting on shelf’s, 30amp and 50amp . I can ship from my store front business out of Paducah KY

Nice PDU man! Kinda has a sketchy look to it, but that’s nothing a good 3D printed case won’t fix

I agree. I went with 20amp so 1 asic/circuit. The 110 outlets are for exhaust fan and ethernet switch.