To me ETH is the weirdest crypto I’ve seen by far, horrific gas gees yet people are all in, but mining is gone so that could change.

Do you think that ETH being censored more than once is just FUD or is it a big red flag? 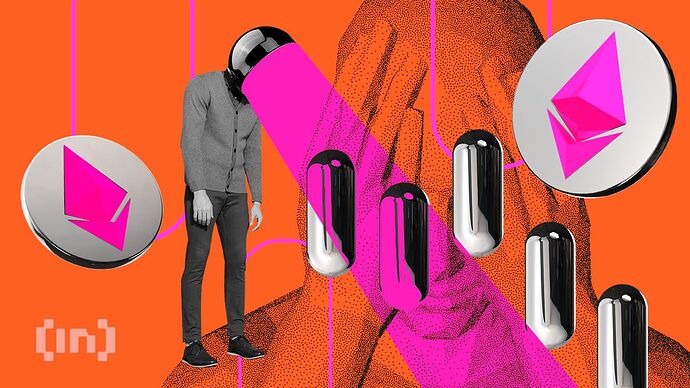 More than half of all Ethereum MEV boost-relays comply with the OFAC rules, increasing transaction censorship in the network. 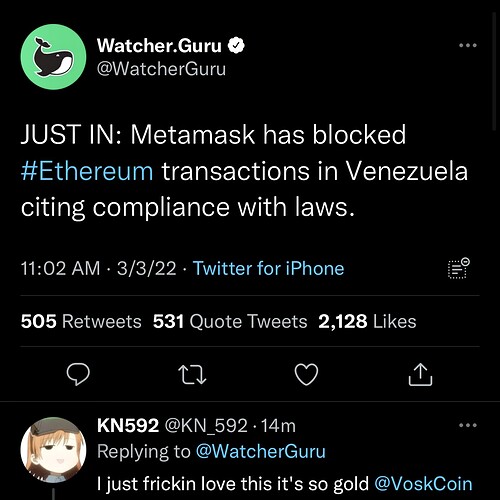 @
ALERT Metamask has bent the knee, unreal, what an incredibly bad job @MetaMask Your coins are safe, you can load them into another wallet using your seed phrase, and now we need some more wallet alternatives for crypto users. Decentralization matters.
2 Likes
y2kanonomous October 16, 2022, 9:07pm #2

if you want nearly true censorship resistance, and anonymity use monero. eth has pretty much always been a way to just grow the elite of its group more money.

Eth gas fees are to much, really their is no room for ethereum to grow, because the only thing keeping them afloat is that it’s we known

Plus switching to proof of stake means that the whales are in total control.

It will never die, its a little daughter of Bitcoin. If Bitcoin goes up, ETH follows.

It will be hard to sink because it has gotten so big but it is hurt by staking further empowering whales and the excessive gas fees. I think competition for better alternatives is strong enough that it isn’t impossible but given the size of its reputation it won’t just crumble.

I always felt that the move from PoW to PoS, and I don’t mean Proof of Stake, was strictly a political decision and not a technical one. Kadena, for me, has proven to me that PoW can be scaled, secure and have relatively low gas fees.

I kind of feel like ETH is on it’s way out, much like DASH. I’ll admit I’m a Maxi and have always had issue with pre-printed/minted tokens. ETH being the grossest of them all with more pre-printed than mined (if we even consider it mining…).

The new pow to pos switch was lame. The Merge started , in theory maybe in code, before EVM or Cross-Chain even existed in conceptual form. So they took an old idea from last Halving cycle and employeed it during this cycle, after so many things have changed in the last 2 years.

When the Merge was announced, ERC had a few tokens, now they have hundreds if not thousands of pre-printed un-backed tokens. The whole model of Miner backed value has gone out the window. ERC does so much funky stuff, they might as well break into smaller groups.

Then the obvious custodial issue and deep back story of bribes. ERC is hosted on Chinese servers. Remember when NEO was China’s baby, PepperRidgeFarms remembers. Now NEO is hosted (nodes) globally and headquartered in NY. So in no uncertain terns, the CCP controls the ERC blockchain and records/monitors all information it contains. If they can social score every citizen (all 4.5 billion), they also have a profile for you and your assets.

And now we are supposed to believe that the “blockchain technology” behind the new ERC is somehow better or more advanced than DOT, Kusama or any of the other Networks competing on a top level. Read Thorchain, it’s an awesome network that is semi-understandable while they try to be fair and transparent, ERC on the other hand is like a secret.

To me, ETH/ERC is everything Satoshi did not want. Controlled printing and production by a small, non-qualified group of selfish jerks who don’t care about global economy but instead care about their own pockets. And when that gets too tough, they hand it over to CCP China.

And MetaMask … fuck man… they are the enemy. When J.P. Morgan purchased control over MetaMask it went to shit. Many people still do not know or don’t care to investigate the fact that MetaMask is not available to countries that do not have an Israeli/Jewish controlled central banks. If you were N.Korean, Iranian or Venezuelan, your assets are gone. J.P.Morgan and USA took them , fuck you come again. You might think … they “can’t” do that , they can. Remember AXIE (ERC token) that got hacked and stolen? The ERC Foundation just went on-chain and took the AXIE’s back… Proving that no token or token network is safe from dev’s who can “take everything if they want”.

I’d also add, Historically, I’ve been plumb wrong about ETH. I always have hated it and watched it go up and up since 2016 when the “great crypto politics debate” ended. Political Crypto defined back then had nothing to do with nations or policies/taxes , ect , it was Tokens Vs Coins and the idea IF token’s “could” even be considered crypto. VISA has used tokenized assets for ever, this is how they operate a multi-nation currency/credit system. But, when we sprinkle in 100 million new crypto user’s with gold bars in their eyes and things like fairness and fair value go out the window.

One thing is for sure, ETH/ERC fanboys do awesome propaganda and meme’s. Blockchain.com did a news letter 2-3 months ago about ETH (pre-merge) where they charted and documented jumps in ETH price compared to the amount of unique Twitter post about ETH. Kind of showing that is seemed like 80,000 separate accounts would all mention ETH then within 3 weeks ETH would jump 2-9 % in value. Overall hinting that propaganda made people think about and invest in ETH while the whole thing had some plan or reason to it.

I can only, sit here and roll my eyes at the audacity of these guys.

My man I was smiling through the whole read, we need this in crypto and we need it 24/7, awesome energy man don’t feel discouraged to go all out I’m pretty sure this is an abridged version lol, I actually learned a lot from this thank you mutated Simpsons fish

You get the VoskGang green medal (