I have 6 5500XTs running smooth as silk. Haven’t really tried to play with the settings yet. They are all a consistent 25.5Mhash and are at 90Watts per card. I have also been looking at the 5600, but they are only 6GB cards. All three are pretty damn good cards and the prices are proportionate to their profitability.

Here is why I prefer any of those three vs the 580. The 580 runs at a 49% profit-to-electricity cost. In other words, you spend more in power than you get in profit. What this means is, if the coin you are mining drops by 50% you are actually losing money as your power stays the same.

thank you for sharing this I was hoping to hear from someone who is actually mining with them!

Right, so here’s what I’ve learned in looking at just the issue that you raised!!!

As we are all learning in tweaking our rigs, it’s the memory that gets you the hash rate on most of the currently profitable algos. So I’ve been trying to compare the probable memory performance across a range of cards.

The 5500XT has 8 GB of GDDR6 with a memory bus of only 128bits but that gives you the same memory bandwidth - 224GB/s. This seems to indicate that the benefits of GDDR6 are lost through the narrower memory bus in this instance.

What also needs to be considered is the improved power efficiency of the new model cards. The Navi10 based cards are much more efficient in that you can get them operating at pretty high hash rates for pretty low power usage. I have RX5700s delivering 53MH/s at 73W. That gives me a hash/watt figure of 0.726MH per Watt. My RX 570s deliver 31MH/s at 90W which is equal to .344MH per Watt - or about half as efficient.

Based on PTCrusader’s figures above (and yes I know they are the stock settings and could probably be improved with some tweaking) the 5500XT is getting a hash/watt of 0.283MH/W which is less than the 570s with some overclocking/undervolting. Given that the 5500XTs are generally priced higher than the 570s, I’d be interested to see what sort of increase in hash rate and reduction in power might be achieved on these Navi10 cards???

can you share your overclock settings? I am getting the same hashrate but I am using 120 watts per card.

I’m fascinated by that 570. There is a 4GB, 8GB, and a 16GB model but NH calculator shows them all as mining about the same. WTH?

Just to clarify my post earlier. Taking the NH calculator which I know isn’t deadeye accurate…

However if ETH dropped by 50% then

One is the safer bet short term as we have no idea what prices will do before end of year. Also, notice 570 uses 2x the amount of power to make same profit.

that is what I was basing my comments on. 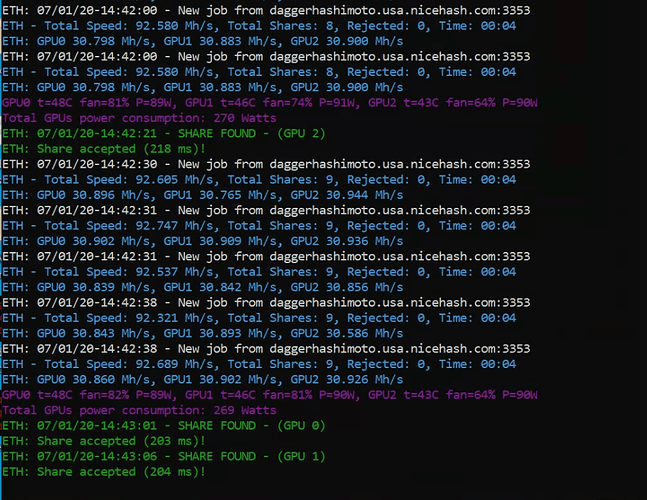 This image shows it hashing on Claymore’s while it uses the same power but gets slightly less hash rate on Phoenixminer (my RX5700s get better hashrate on Phoenix so I usually run the 570s on Phoenix as well because I feel like it’s more stable).

Oh…I forgot to mention that I flashed the BIOS for each of these 570s to an RX580 which took me all of about 20 minutes to do 12 of them.

These are the Adrenalin settings for my RX5700s 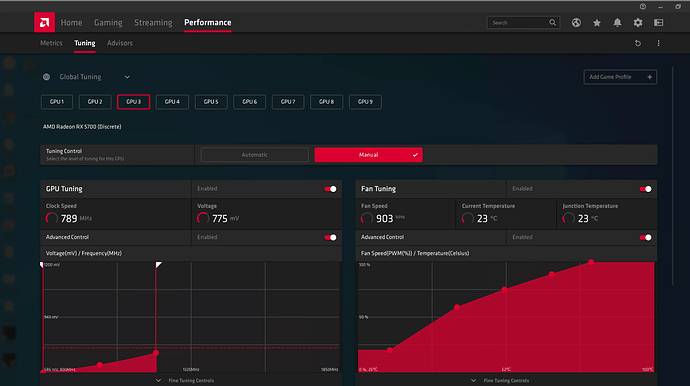 I’ve brought the core clocks down to about 1200mHz and 800mV (just drag the white flag across to about 1200 and then put your voltage in the box below). I’ve boosted the memory to 1824 and on my board you can’t alter the mem voltage (set at 850mV) unless you mod the board, which I might get to eventually. Not every card is the same so on one of my cards I have a slightly lower mem clock which gives me a tiny drop in hash but also a drop in power usage.

This is giving me 75w and producing 52.5Mh/s but I just restarted the rig and I find the hash rate will slowly rise to about 53Mh/s and the voltage will settle somewhere around 72-73w.

Thanks - it’s taken a bit of tweaking and many rig restarts when I go a little too low on the voltage but I’m happy to have the 9 GPU rig running pretty stable with total power draw here:

GPUs 1, 3 and 7 are the RX570s which are sitting down at 87 watts now and the other 6 are the RX5700s staying around the 75 watts. Getting a pretty consistent hash rate at just over 400mH/s with no incorrect or stale shares. I can crank the hash rate up to get over 415, but I have to up the power and I start getting a meaningful number of rejects making my “at pool” hashrate fall back below what I get at the 400mH/s - so just wasting power doing that.

One thing to look out for if you have had the rig fail to start after you added more GPUs is to check all your power cables to make sure you haven’t shorted out any wires. With my setup, because the 5700s need an 8pin and a 6pin to the card, I didn’t have enough PCIE power cables on my 1200w PSU to power the risers, so I had to use the SATA connectors. I was running 2 SATA cables to power 3 risers each but found out you shouldn’t power more than 2 risers with each SATA cable. I have now thrown out 4 SATA cables after I looked at them and found that I had melted the plastic and probably shorted the cable at a point very close to the PSU itself.