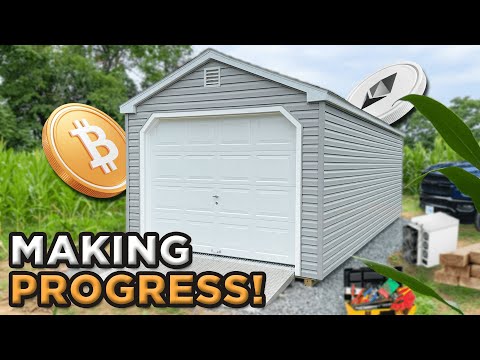 It’s been a big week here at VoskCoin HQ! We’ve received the Mining Shed, we’re moving miners in, are wrapping up the HQ building, and got some new toys for the solar-powered cryptocurrency mining farm. Subscribe to see what’s next on the farm - http://voskco.in/Sub

We’ve made some progress on the VoskCoin DIY Solar Cryptocurrency Mining Farm! This week, we received our 10’ x 24’ Amish-built mining shed, where we plan to build out a mining shed and run GPU and ASIC miners, and we’ve already started to move miners in! Our next steps are to route electricity, cut in fans, and set up some shelves! We are also wrapping up the VoskCoin HQ building where we plan to create a mining test bench and test the weight, noise levels, and efficiency of all of the equipment that comes in. We also plan to use the building to store VoskCoin merch and have a new studio to shoot cool content. And finally, we got a new VoskCoin truck and John Deere Gator to traverse the property. These tools will help us work more efficiently and help bring you the best content into the next bull market!

Have some input on the Mining Shed? Help Us Build the Mining Shed 2.0!
My most recent mining farm update - How I’m Building An EPIC Solar Powered Bitcoin Mining Shed! - YouTube
My rough plans for building a solar-powered BTC crypto mining farm - Building a SOLAR POWERED Bitcoin Crypto Mining Farm | My Rough Plans - YouTube
Win some BTC and help us choose the name for our crypto headquarters! - Crypto Building Update! (We Need Your Help!)

Follow us on our official social media accounts - https://voskco.in/22 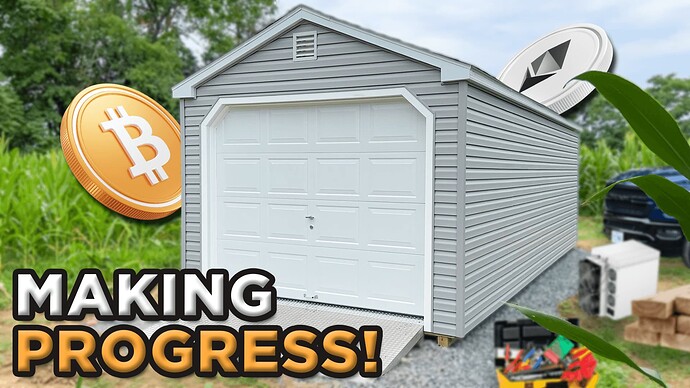 Wasn’t sure if you thought about insulating the shed, would recommend foam board or spray in insulation and then plywood or paneling to cover it. Would help keep the heat from the sun out so that exhaust fans aren’t working so hard in the summer. I know it is an added expense, but would be worth it long term. And it would also help cut down the noise noticed outside of the shed as well. Just an idea, I know when I walk into my barn, the area that I have insulated is almost 10-15 degrees cooler.

If you do a divider wall, you could put it on a track system, like sliding barn doors, from the ceiling too, so that if you need to adjust it from one spot to another it would move easily. To secure it in place you can use slide locks so all you would have to do to secure it is drill a hole big enough for the slide lock to go into.