Finally, a real FPGA mining rig that is easy to use, the TPS-1530 using the VU9P FPGA chip has finally been released for public sale by the Frontier Group! Let’s review this FPGA miner! Subscribe to VoskCoin - http://voskco.in/Sub

Start staking your cryptocurrency today along with a $50 sign-up bonus , we are staking our crypto for 5-18% APR right now! Get $50 in Cryptocurrency JUST FOR SIGNING-UP With Crypto.com

Generally, there are four types of cryptocurrency mining, which is CPU, GPU, ASIC, and FPGA mining. Field programmable gate array or FPGA mining has always been the most complex AND the most guarded sector of crypto mining. Frontier Group has brought the TPS-1530 to the public market which is most notably a very easy to use FPGA miner in comparison with liquid cooled custom FPGA mining rigs commonly using the bcu-1525 or the CVP-13 FPGA cards. Most custom FPGA mining rigs use liquid cooling, which does allow for higher overclocking generally, but it is also one more thing to learn, setup, and manage whereas air cooling your mining rig, especially a FPGA mining rig makes long-term management much easier. Let’s review the TPS-1530 built with a VU9P FPGA mining chip that is capable to mine any FPGA mineable coins like Kadena and Digibyte, in this video we will be mining Digibyte on their odocrypt mining algorithm.

The TPS-1530 is smaller and more efficient than competitor FPGA mining rigs like the hashaltcoin blackminer (any model ex. f1 f1 ultra f1+ and f1 mini) as well as the Imperium F2 and R2 FPGA miners. 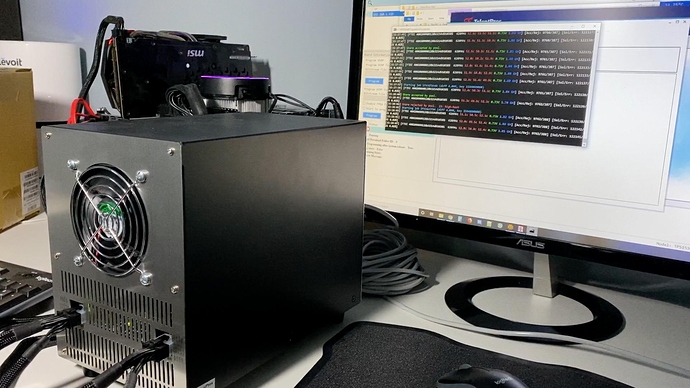 The mining power of a single GPU at 10X the price. WTF? Even if this thing ran on fairy dust, it wouldn’t ROI for over 6 years. I don’t get it I guess. Why does this product exist?

It’s much more effective than a GPU on FPGA algorithms

It is an expensive device, but even doing things budget oriented you’d probably be $1,500 into a DIY watercooled version

My FPGA rig fits onto a standard GPU mining RIG frame by inverting the standoffs and using an 8 port network switch with my D-Link 1521 wireless bridge. I keep it outdoors due to the HOT AZ heat and AC costs if kept indoors. 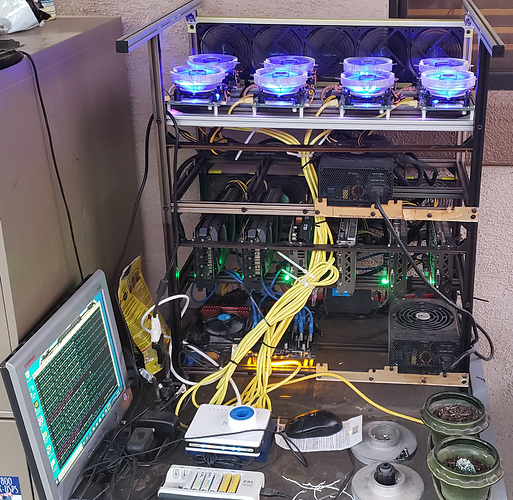 A micro SD memory card was required in each FPGA to run the ODOcrypt algorithm.

That’s such an awesome setup, just looks like it was really fun to design and it’s profitable lol

Where do you keep it outdoors to keep it secure from weather elements?

Judging the miner based on mining a single coin is not fair. DGB was chosen to demonstrate the ease of programming and mining procedures and not for return on investment. As you may know, there are a few exciting bitstream projects that are underway, which would drastically change ROI.

A ton of engineering went into this miner with the average home user in mind. Its the only device that can do 300A+ on air without sounding like an air raid siren. It is for people who want a simple device that can be turned on, set to mine and forget. Not everybody is as comfortable building water cooling loops as maybe you are. With the miner, you are getting not 1 but 2 in-house built apps for managing the miner. From loading and storing bitstreams on the SD card, setting voltage, even to save your settings for various bitstreams.

Sadly, a lot of cool features that are unmatched by other companies, like changing voltage during mining, power cycling without turning off your computer, built-in safety protection, temp monitoring was not reviewed or even mentioned. For more details, I invite you to check our website.

Home users that want to turn something on and forget about it are expecting ROI and future profits. There would be no other reason to do such a thing. Hobbyists generally enjoy the challenge of learning something new even if profits aren’t important to them so this probably isn’t meant to appeal to them either. How long is the ROI using the most profitable algorithm using current market and network conditions? How much power does this miner draw at the wall? What bitstreams are available and/or being developed? Are they free or licensed? I didn’t see any of that on the website except a list of developers. Is a first time FPGA user supposed to know who these people are? Just list out algorithms and hashrates and power like everyone else.

I’m sure a ton of engineering did go into this product and it sounds easier to use and quieter than the alternatives so I don’t mean to diminish the effort it took to create. I just think the market you are going after cares only about ROI and profitability which makes me wonder why it exists. Why wouldn’t they just buy a Blackminer for 1/3 the cost and 3X the hashrate or a bunch of F1 Mini+ for $140 each? I fall into the category somewhere between average home user and hobbyist meaning I enjoy messing with my rigs and trying new things but they still need to ROI in a reasonable amount of time or I’m not going to be interested. You’re right, things could change and make the ROI better and I would weigh it against the available alternatives at the time.

@Dollyshunk Sweet rig! Now I want an F1 Mini+ to play around with.

you can buy mine

Sits on the back porch, just below the kitchen sink & window
It has a covered patio

Recall, when I first purchased these F1mini+ miners, they were mining CKB by default. I managed to mine about $70 of CKB before the hashrate sunk all profits. I believe the next algorithm I tried (yes, the mini+ lets you load bitstreams of other algos) was Handshake where I quickly forged me around $100. Not sure if the profitability of HNS was lost or not but these mini’s are now mining DGB and earning $2.92/day before electric costs. As was said, these F1 mini+ miners can adapt and are simply “SET it and FORGET it”

Drew had a bad board that took a long time to exchange. I wouldn’t want that.

The F1 mini+ at $140 ($189 earlier) is cheap, and is doable without a large cash outflow. I bought these two at a time as I learned to navigate their intricacies. What’s fun is that they are cheap, and you can remote into them. I can sit in my air conditioned office and manage my rigs, tune them up, tweak them for every oz. of hashpower and power level. It wasn’t easy to learn how to ftp into them to copy files to the SDCARD while mounted to the mini. Heck, changing algorithms and file systems wasn’t easy either but I’ve done it. Lately I’ve been on the FPGA telegram site helping others get their algorithms set up as profitability changes. It’s also a challenge to find a good pool with each different coin. Recently I had to combine the pool payouts into larger payouts as tiny payouts can mess up your wallet with utxo’s. So, playing with wallets, exchanges, pools, algos, file transfers/uploads is an interesting hobby … and yes the mini’s are quiet too. Now, Specs are what viewers like so here are a few … P.S. the ROI changes all the time … while originally 340 days, it now looks like twice that.

While I experiment, study, and record the algorithms I keep a record of them so I can calculate the “coin to mine” daily. It only takes a minute to switch once you have a wallet set up and a pool chosen.
Here are some rates for the 1660 TI rig under the FPGA’s 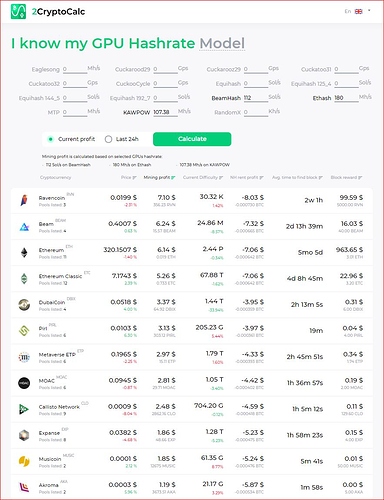 Finally, the FPGA’s draw just over 100 W each. That rig of 8 FPGA’s is being powered by a 1300 W power supply and I could easily add a couple more FPGA’s.

The 1660 TI’s are reduced in power by MSI’s Afterburner and use only 72 W each. That rig Plus one more 2070 card I mine with consume only 510 W to produce a profitable hashrate. Oh, did I mention “FREE ALGORITMS”???

speaking of the bad board, hashaltcoin finally sent me a replacement hashboard 6? 8? months later, idk something ridiculous, and it never worked properly either. They’ve been hardly any help regarding issues, the only miners of theirs that have functioned well for me were their mini and mini+ miners, their full size blackminers fpga rigs underperformed every time in my testing.

8 F1 mini+ miners at .256.online today earned me an average of 150 coins/day over the last 4 days.
Now that’s something. Also, in AZ. it gets pretty hot 111F degrees around 3:00 pm and you can see the performance degrade until the temperature drops in the evening (if it drops) … These little guys are cute and the power supply can handle a few more which can be mounted upside down below the others. I may just order a few more.