NEED HELP deciding which way to go I want to BUILD or get something running, but I’m too much of a n00b to make the right choice. So I figured where better to ask my questions…

I was thinking about going for an oldie but a goodie Vosk’s 2 GPU board from January 2019---- but maybe some upgrades?? TBH I don’t know what I should change and I’d also rather get 3 of them going if I can get 3 used GPUs that you guys consider better then the 2 banger.

I am now tempted to just break the bank and order a k5 for simplicity’s sake… but honestly, I do want to run aboard with 3 GPU’s and any information you guys could contribute would be excellent and appreciated.

I have between 7-1100 that I want to drop … and yes I know the k5 is more- but I’d sell off a bag or something… Regardless I’d love to hear some opinions on which way I should go (Think about if it was you with that much money where would you start on your first build) Thank you for your time
Respectfully,
~

Well, in my opinion, you’d probably be better off building a GPU rig. You can find lots of used parts on Ebay/Amazon relatively cheaply and should be able to put together something for that amount. There’s a lot more flexibility with GPU’s… you can throw them at a lot of different projects, either on speculation or based on what’s most profitable at the moment. Plus, computers don’t require any fancy electrical wiring to be able to run. Heh, kind of want to do something similar, but have a lot of logistical issues like lack of a good place to set-up box, living in a hot area, and not having a great electric rate

Hey InvestYG,
Thanks for the reply! - I was going try to stick to those two platforms to buy the tech since they are strict regarding working tech (especially eBay). Its just I’m only certain of a few cards that I’ve read about and I might miss a good deal just because its not a 1070 or whatever (and then every cared has letters attached its a n00bs nightmare lol…
I plan to hunt on there or maybe I’'ll get lucky on a forum - where I can get some cards that are still in solid shape. I hope to find 2 or 3 GPU cards that fit the bill, but a lot has changeed since Vosk did his yearly 2 gpu build video I think about a 1/2 year. Are Most of the parts still IDEAL for the build and if you know what I’m talking about or just know my budget what would you suggest looking at as far as gpu’s. and Maybe where I can cut a few corners to throw at a 3rd gpu (if possible) with newer tech being cheaper or suggestionson used goods… here’s the video I’m referring too https://www.youtube.com/watch?v=r0s_Wj-6zyohttps://www.youtube.com/watch?v=r0s_Wj-6zyo

Tips are welcome I’ve only ever mined with plug and playmachines like futurebit apollo and the ML2… I wana get my feeet wet~!
Thanks guys!

I am looking to build the absolute cheapest rig possible I have next to zero computer building/rig building skills or knowledge so I would like to use the least expensive route to learn and make mistakes with and when I feel more comfortable with how everything works I will upgrade.

Well, a lot of the general advice is still valid. I used to build computers, so I’m not a complete noob at it. It has been a few years, and I haven’t personally put together a rig specifically for mining. But, putting a computer together really isn’t too bad.

First off, I’d say to identify if you just want it solely for mining or if you think you might want to use it for anything else (like, occasional gaming). If it’s just mining, you can skimp on a lot of things, like hard drive space, RAM, and peripherals. Which means that the advice on the video is still fairly valid… heck, the parts might be even cheaper now that more time has passed.

If you’re planning to solely GPU mine, then the main thing is to make sure you get a mother board that supports that many cards - unless your comfortable adding risers. So, 2 PCI slots for a 2 GPU build or 3 for a 3 GPU builds… ideally, if you want to try to expand off of risers in the future also slots for those. Like the MSI z270-a pro shown in the video only has two PCI slots, so if you aren’t comfortable adding risers and want to do a 3 GPU build, that wouldn’t be the best choice.

As far as GPU’s go, if you have a ballpark for your electric rate check out the NiceHash estimates. Like, right now it’s saying a Nvidia 1070 at $.10 electric rate would make about $0.16 a day. Taking a look at E-bay, there’s auctions from $175 to $1000, the latter of which is, of course, silly. So, if your going to be making about $3 a month, how many months are you comfortable waiting for the card to pay itself off? If it’s 2 years, and you expect the profitability to remain steady (which it rarely does) then you wouldn’t want to spend more than $72 on it, which you’re unlikely to find one for.

As Vosk has noted in some of his more recent videos, mining isn’t super profitable at consumer electric rates. But, if you want to do it more out of interest (or, on speculation that prices will go up sharply), then just troll E-Bay and Amazon for a decent deal from what appears to be a reputable vendor. I would suggest looking at the GPUs listed on the NiceHash calculator and checking out prices for those as a start. (Edited to fix typos and grammatical errors

In my experience, building a GPU rig will give you so much more useful knowledge regarding PC’s, components and system builds that will be useful. I haven’t pursued FPGA’s and refuse to play the ASIC game of cat and mouse, but the knowledge gained from building, trouble shooting and general upkeep on a GPU rig has proven very beneficial. Another point to consider is room for future expansion. The key to a small rig is to be able to expand in the future. Spend a little more upfront on a large enough power supply, and a motherboard with 5 or 6 pci slots to allow you to expand if, like in my case, you find yourself hopelessly addicted. 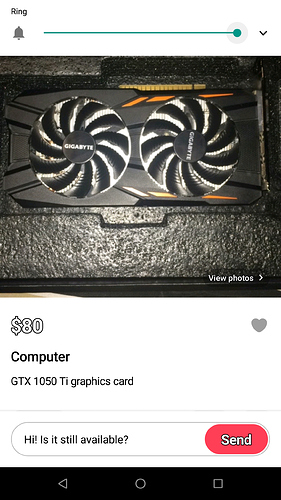 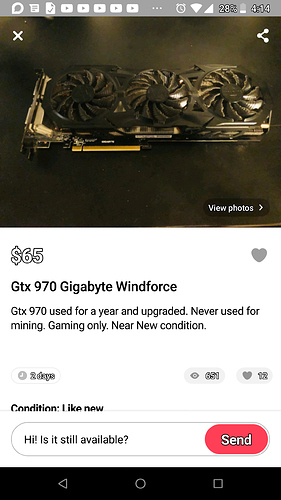 Well, I’m finding some conflicting information on the specs. But, if what I found is accurate, the 970 uses about 145 Watts while the 1050 ti uses about 75 Watts.

Not sure where your shopping, but if it’s something with like local pick-up (and no shipping fees) the prices seem fair compared to what I’m seeing on E-Bay taking a quick look.

What is a cuda core? Lol and also yes these are local items I found near me with no shipping costs

I’m actually going to crunch all the numbers next week and order parts for a new $1000 gpu rig build, so lets figure out the best course of action together

One criteria I’m going to have (for better and worse) is using new parts so everything maintains a warranty, but also going to run numbers w/ X used GPU instead of Y new GPU.

I’m also going to be using Nvidia GPUs for this build, and thinking about doing a second build in the future w/ AMD GPUs

" CUDA cores are parallel processors similar to a processor in a computer, which may be a dual or quad-core processor. Nvidia GPUs, though, can have several thousand cores. They are responsible for various tasks that allow the number of cores to relate directly to the speed and power of the GPU." - Definition taken from an article on Nvidia architechture

So it usually better to have more cuda cores for better performance?

Yes, it’s like more cores on a CPU. Generally speaking, more means more power. But, there’s also improvements over generations. Like a 4 Core 2 GHZ CPU isn’t as good as a 4 Core 3 GHZ CPU. 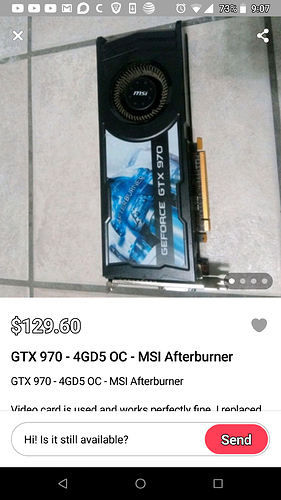 Here is what I bought for $200 found an EVGA 600 W PSU for $50 now I just need an SSD and I think I will be ready to mine. Is there anything else I am forgetting? 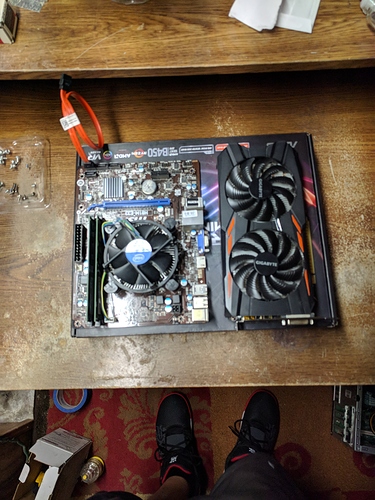 So you got the 1050 ti then? Assuming that you’ve got the basic peripherals (keyboard, mouse, monitor) to get it up and running you should probably be all set. 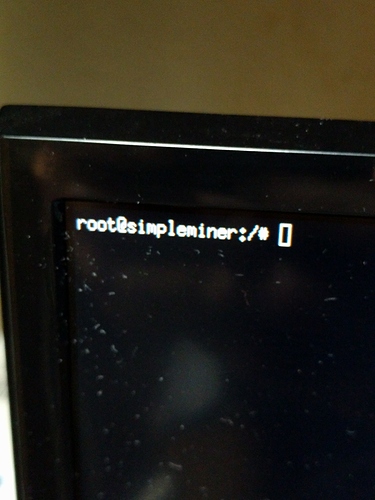 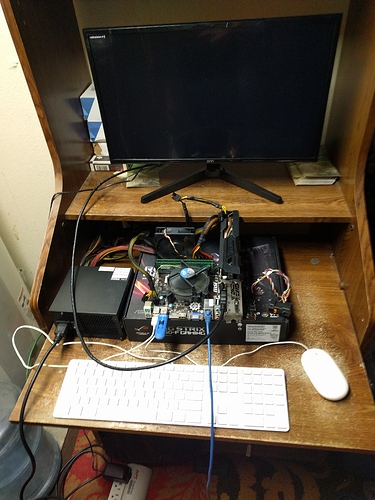 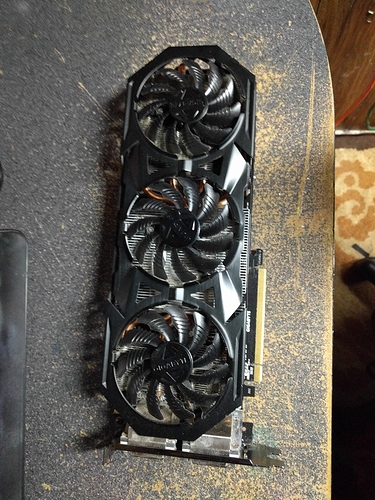 It showed a bunch of processes running and then it went to this screen almost like a screen saver.

I was just thinking is it a problem to have Intel cpu and AMD GPU? Do I need NVIDIA?