The experience & profitability of a Komodo Notary Node

Here is a brief background on Komodo KMD cryptocurrency coin and their notary nodes: There are 64 notary nodes in total. Thirty of those nodes come up for election every year. The lower-performing notary nodes have to compete for re-election with new users interested in becoming notary node operators.

To be blunt they “move the goalposts” around to suit their desires in this regard, so don’t think that this process is 100% fair, honest, transparent, or even easy to make sense of.

The Komodo notary node process has received a lot of negative feedback year over year, they recently created the “Notary Node Bible” to help address this, it’s a start. They also finally, years later restricted notary node revenue share, which basically enticed voters to vote for nodes that would return a % of the nodes earnings to them creating incredible bias among many other issues. If you’re interested in becoming a Komodo notary node operator, then that linked KMD bible would be the best place to start.

One other note, just what is a Komodo notary node anyway? This official explanation pasted below says it better than I could.

Notarizations are required for Delayed Proof of Work (dPoW) security, which recycles the hash rate of the Bitcoin network to secure third-party blockchains, as well as Platform Synchronizations, a technology that makes scaling and interoperability features available to all Smart Chain projects. That, in short, is why Notary Nodes are such an important aspect of the Komodo ecosystem.

Long story short, we ran for a KMD notary node in 2018, and barely lost, we ran for four spots and IIRC if we ran for one spot, in the EU region, we would have won! For reference Komodo notary nodes are divided between 4 regions in the world, North America NA, Europe EU, Asia-Russia AR, and Southern Hemisphere SR. We ran for election again in 2019, only in the European region, and we were elected with a total of 1283402 votes, valued at the time of ~1.5 million dollars in USD of Komodo KMD coins.

You can review the total votes of all regions, ranking the top 10 candidates in the 2019 election. 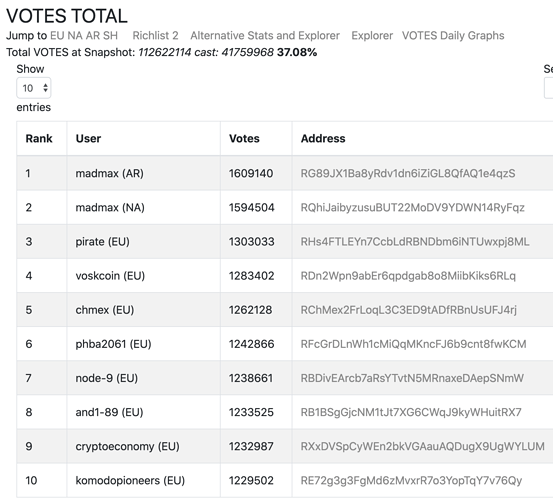 There was drama revolving around us running for a KMD notary node, because we don’t have a development background, and at one point the European region more votes cast in it than all three of the other regions combined. I can dig-up some screenshots to support this later if anyone is actually that interested. 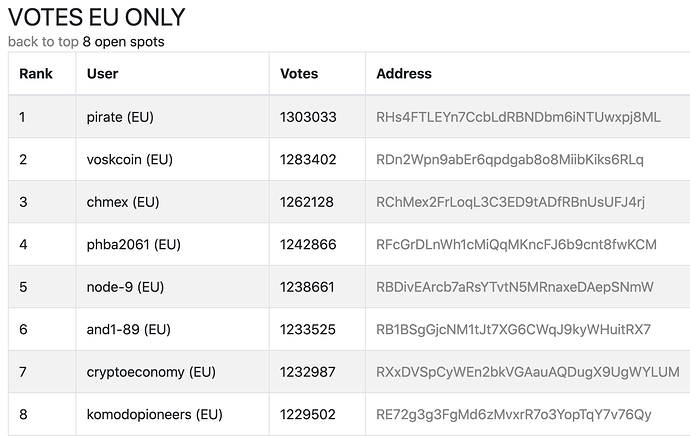 After a weird, interesting, and heated 2019 Komodo notary node election, the VoskCoin team won a spot as a notary node operator in the third annual Komodo notary node elections in 2019. We were elected to become a Komodo KMD notary node operator in 2019-2020. Our campaign was simple, @greer would operate our node, and I would create some Komodo video content that was helpful and informative. Unfortunately after paying our server costs, along with the sliding of Komodo’s price, and compensating Greerso for his work… I end up nearly working for free. To be clear this is at no fault of Greerso, I wanted him to be appropriately compensated because he is the only reason our notary node even operates! I understood that with my current workload I would not have time to learn and maintain the notary node, which is why he was a critical addition to our campaign.

How much time and labor does operating a Komodo notary node take?

Our notary node was operated by @greer and he’s told me that operating a Komodo KMD notary node on average takes anywhere from ~30 hours to 60 hours a month. Greerso won’t say it himself, but I think he’s very talented and his figures give real insight into what it would take someone new to Komodo KMD to successfully operate their notary node. There were periods where our node was one of the top-performing nodes, which is quite a testament to his performance and skills. 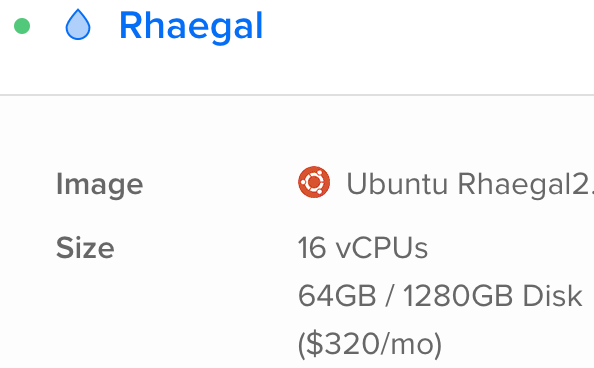 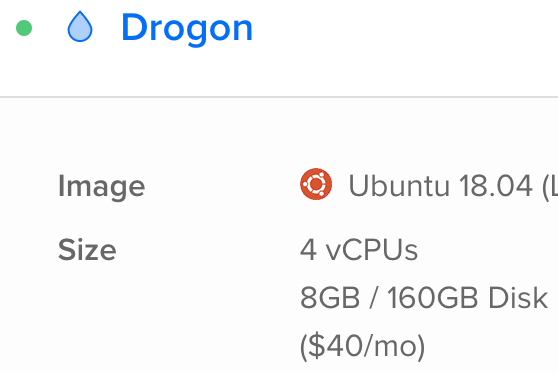 A 16 CPU core server with a 1.25 TB SSD and 64 GB of RAM is the cheapest and reliable server we could deploy out of Europe to operate the main portion of the Komodo notary node. A few months after becoming a 2019-2020 notary node operator, they added additional requirements that needed a secondary server to be ran, which needed 4 CPU cores, 8 GB’s of RAM, and a 160 GB SSD.

To date these servers have cost us ~$4,133 dollars after being elected a KMD NN operator, and ~$250 dollars as a Komodo notary node candidate. Ultimately the annual operating expense of a Komodo Notary Node on a VPS(s) will likely cost anyone between $4,000-$5,000 dollars. You are allowed to run your own hardware for your notary node, even out of your own home. However, in 2018 Europe was the least competitive region for KMD notary nodes, so that is why I decided to run for election in that region, which requires you to not be from that region, but to be running your notary node from there.

Here is an example of an average monthly bill for our KMD notary node servers.

So how many coins and how much money did a notary node earn?

This list reveals the current Komodo notary nodes mining data, this is relevant for determining how many Komodo KMD coins were mined with the notary node, ours earned 15,988 KMD coins in ~11 months. 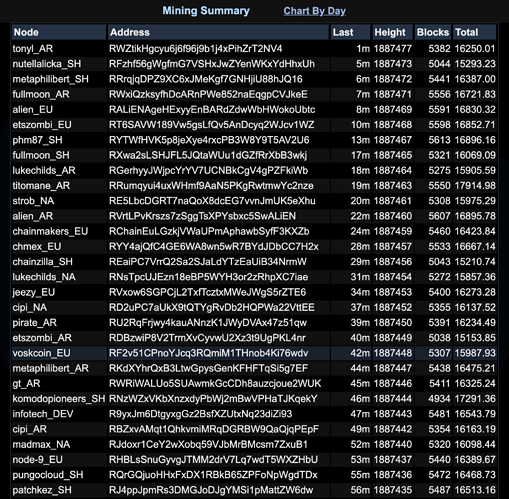 15,988 Komodo KMD coins are currently worth about $9,000 dollars, or almost exactly one Bitcoin at its current price. The average price per day for Komodo over the last year fell between $0.50-$0.60 cents USD, so the current price is incredibly accurate for an average expected yield.

Once you factor in the expenses of running a notary node, your earnings are instantly cut in half. Now if the notary node is operated by more than one person, the earnings need to be distributed fairly. So let’s say you have a team of two people, after you split your earnings in half and average them out over a period of 11 months… you only earned $204 dollars a month…

Running in a public election, learning a likely new to you cryptocurrency and blockchain technology, and maintaining an advanced notary node that is constantly being changed, upgraded, broken, and facing unique challenges of notarizing dozens of blockchains for $204 dollars a month, or even possibly $408 dollars a month… well I hope that’s worth it to you. There are different point of views when it comes to operating as a notary node, but quite simply the Komodo community and other notary node operators as well as the official Komodo team members will expect you to treat it like a job, and it sure felt like one.

Ultimately I feel like there is A LOT expected of notary node operators, and if you have spare time and the skills it could be a good experience for you. If you are already busy and think the actual node operation side is as simple as running a general cryptocurrency node, you will be in for a rude awakening!

We decided to not run for re-election in the fourth annual Komodo KMD notary node elections, which decides the notary node operators of 2020-2021. However, Greerso did, and he was even elected as a NA notary node operator. I’m excited and happy for him, as he will be able to use in-house server equipment to potentially severely reduce the expenses and he already has developed the skill set of operating a Komodo notary node over the last year operating our joint node.

At the end of the day, running for a notary node, being elected, and being part of the notary node operation was an interesting experience. There are some toxic developers in the Komodo community, but there are some super smart individuals in there as well. Unfortunately it’s the classic scenario where a couple of bad fruit sour the batch. There are also several interesting projects attached to the Komodo blockchain and/or ecosystem such as Piratechain ARRR and Veruscoin VRSC, the success of these projects is partially tied to Komodo, for better and worse.