I05 my experience with them

If they ever make things right and uphold their promises, I will surly update here.

Now we cross our fingers and hope they are legit!

34 spots left that qualify for fixed rewards until March 2023 at the time of this post.

After 1500 devices sold, fix rewards will no longer apply.

But, you will still receive breathing and hopping rewards. (Kinda like heliums POC rewards)

It’s a very new and interesting project that allows any helium miner to earn extra rewards paid out in BTC, without any modifications to your helium miner.

Highly recommend you to do your own research, only invest what you’re willing to lose.

But may be a great opportunity for early adopters!

Join their discord. A lot of good information is buried there.

First 1500 spots have been filled. Rewards are designated to began this Friday evening…

I’ll update here once the first reward is actually paid…

Should help prove the legitimacy of this project.

Got my first payment of 12$ worth of BTC from I05 today for my connected helium hotspot!

This project is looking very legit and has a lot of potential!

Fixed rewards until March 1st 2023 are no longer available.

But, getting involved early with I05 is still rewarding as you will still get variable rewards (breathing and hopping rewards). And the rewards for these variable rewards are much higher currently, as currently there are only a low number (relatively) of people participating in the project.

If you connect via an existing helium hotspot, does the hotspot still perform normally and still give helium rewards as well?

Quick update for those interested in the I05 project.

I’ve been getting daily rewards paid out in BTC since Aug. 28th. (I qualified for being part of the first 1500 devices purchased, which pays a fixed amount of BTC per day until March 2023).

They are still working on the smart contract to pay the September 1st bounty rewards but will send out as soon as it is ready.

Devices ordered have not shipped yet, but they have mentioned that there will be a shipping update Monday.

I’m currently %50 ROI’ed on my investments into I05. And I’m guessing I’ll be in the green in the next few days…

I05 has some growing pains as I don’t think they were ready for the amount of people who signed up by buying devices / connecting their helium devices. They are swamped with onboarding new members and a lot of people don’t know how to submit a correct BTC address that is compatible with native BTC network. Hence why the smart contract is taking longer to be completed (incompatible BTC address causes the smart contract to stop). So they have to either remove the incompatible address or wait for the person to submit a compatible address. They have chosen to wait to receive a good majority of correct BTC address before finishing.

Despite all the growing pains, My gut feeling is this is a legit project that has a lot of potential!

If you decide to also join in, be ready to be patient until they get things ironed out.

Due to the overwhelming demand, I05 has temporarily paused the sales of new helium hotspot connections until September 8th, so the team can catch up and take care of the current customers who invested early.

Let me tell you something about this project: team is behind project lifi-beam from last year, a scam.
I have some proofs for those who are interested and some screens.

In the original lifi story everything was legit and fine, until colapse, i did earned some that time, then lost a lot :))
In here, IO5, the same people involved, like in LIFI, what a strange coincidence, dont you think ?
Well, lets start with lifi-beam ( i was erounec in there, in here i was banned for talking)
In first month, i have earned about 200 usd.
Tech was also real. I was at the begining, first earnings were from 1 license i ve paid, on a Dragino hotspot.
After 2 weeks, confident is not a scam, i have ordered 2 hotspots from them. Then the colapse and you can read more
on reddit, youtube and so on.

Then, they said that could not sent original coins (doge etc) and made their coins, LIFI, which later moved to LIFI2 and
later into LFX and so on…
So, Mikez and Jerome (mr Andy’s name now) were both involved in lifibeam!
Just take care. Nothing more. My first account was banned just for rising some questions in the new discord channel.

Now, this new bussines. Mikez is again admin! Second coincidence, Jerome is here too! From the begining. And other 2 and more now, i dont know all of them.
Thats all, its a long story and again, i just want that people be caution. I have photos with chats on the lifi chanel, and with this new bussines and with other ppl banned for trying to warn… 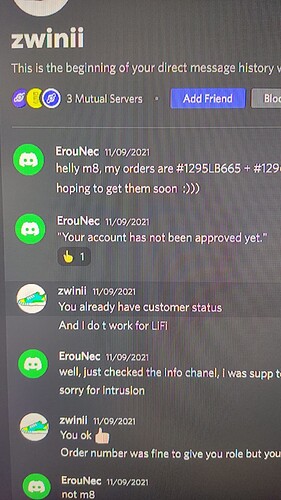 You can try it if you want, im just here to open your eyes.Cheers

Zwinii changed his name after i posted (of course, they banned me on their discord channel and deleted my posts) 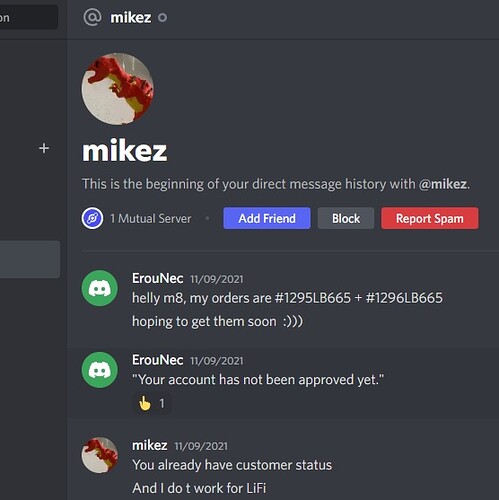 Your doing the lord’s work brother keep it up.

Always two sides to the story.

By all means this is not a project for people to just jump into. Only invest what you can lose.

I only have invested what I can lose so.

I’ll continue to post updates here of my experience.

If your not willing to fully research (also both side to the story above)… and not comfortable, don’t jump in. You can wait for my updates and go from there.

Im still excited about I05 and and hoping for the best. Lots of growing pains… but again I can afford to lose what I invested . No big deal if it all falls off a cliff.

Not investing advice by the way, just posting my experience with I05.

Yea, you re right about that, still i had to warn .
If project were 100% legit, they shouldnt kick me 4 times in a day. Were they transparent? NO. I had to log in 4 times with diff accounts :)))Processing: new admin.jfif…

First time, i had asked if project is ok comparing with lifi-beam, i only asked if MrAndy is in the channel (lol) …PAM! > bann

I did log in with my 2nd discord account, and warned in private some members … in about 2 hours, PAM, again ban ( i warned maybe some of the stuff friends?)

Again, 3 rd account, again log in, warning anothers, again BAN in a phew hours.
My last time, 4th, i spoked in 3 subchanels on io5 , not private messages , copy paste of a long message, in a phew secconds ban again.

After all, my words were heared and raised suspicions, so now what did they did?
They told that they didnt knew that admin (zwinii aka mikez) and they removed him form discord channel.

Why did they not discuss about it from the begining instead of baning and mocking me?
IDK
But that was enough for me and my conclusion. There for, i replyed on the reddit io5 and lifi-beam so people be aware.

I think project will last some time, 1 month, who knows …
I wish that it last more and be genuine … For the sake of those who already bought licenses ore made orders …

Oh, i forgot bout something else:
There are almost 1.000.000 helium hotspots, do you think they can pay all? their budget its that big ? If yes, how come that their headquarter is not for real?
One of the people i’ve talked, checked locally in Lisbon (i have asked him to wrote this on the discord channel and reddit)
Adress is real, but in that tower they arn’t, just other companies…Where is io5? In the cloud lol

Let me tell how they work:

They will continue this act until enough members will join and order. Till then, they will pay small and some, to act as genuine.

@everyone I really do not enjoy having to start the day discussing SMOKLM (again) but wanted to just clarify where we are with him. He made a drunken live stream in the early hours of this morning where he made various allegations, or hinted at them, for legal reasons I cannot address them all specifically but the crux of the issue seems to focus on a) The prior history of one of our former admins and b) That harassing an agency we work with for importing administration, to the point that they don’t wish to work with us or even associate with us any longer is grounds for a conspiracy.

People ask why we don’t post the names of our suppliers and customers, the answer is that when people exist who have no commercial or legal boundaries nor conscience, protective measures have to be put in place. The sole company that we had a documented working relationship have been harassed day and night for 2 weeks to the point where they simply will not work with us, can you imagine if this was a $10M client or one of our investors?

We provided SMOKLM with the opportunity to do the correct thing both for us and himself, but he has chosen another path.

This morning we are assigning bailiffs in Paris to locate and serve assignation on him
We have applied to the TDC for an expedited court hearing on the matter, if this fails we have also applied for an interim injunction prohibiting the transmission of his entire channel
Finally we have applied for an order that freezes his personal assets in lieu of him potentially disposing of assets prior to the court hearing

I have received news from “inside”, it seems like it is a fraud and they pay less or not at all.
Exactly the same was in lifi-beam, that point was the start where they kick hundred of members and canceled their orders without refund! That was the moment i called “fall of the empire” :)))

Same here, i write a few comments predicting how payment time will go on, how website information is missleading , and some more thing in future that most users dont think about. I was banned from server and being told this was becouse i make users afraid and they may not join. At later point everything i was saying happened and, rewards will go for a Weekly payments, website was changed and so on…. So i made new account and asked Ban to be removed couse all reasons were legit and they confirmed in time. I got banned again. But i am recieving rewards so far . I am at 0 , no loss

Just going to write my experience with I05 here… I have no agenda “for” or “against” I05.

Just going to list facts and not opinions or unproven ideas…

Biggest thing to point out is,

They allow customers to pay with a credit card through stripe. They have a refund/return policy.

I05 pays rewards in BTC. Not a token they control, but BTC. Once they pay, they cannot get BTC back.

This week I05 plans is to pay all delayed fixed rewards. Which will put me in the green once I receive the delayed rewards.

Also planned, outdoor sinknodes will ship out this week. 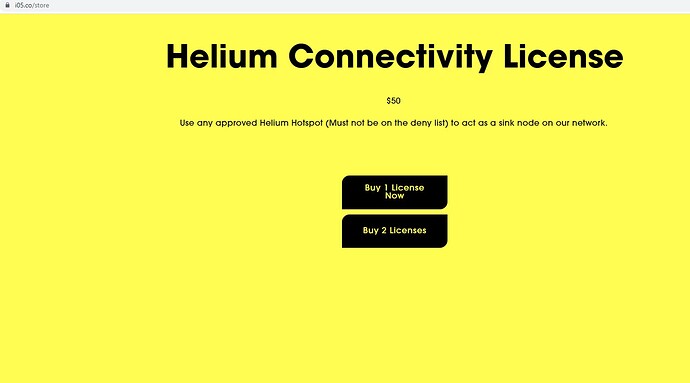