I am earning $60 a month AFTER expenses using my harddrives! Computer hard drives are cheap and plentiful, any sized HDDs can be used. I am mining Chia with the Evergreen Miner, a plug and play HDD mining rig! Buy the best mining rig of 2023 here - https://voskco.in/egm

Want a free crypto mining rig? VoskCoin linked up with Coin Mining Central to give away 10 mining rigs this month!

I am chasing financial freedom and earning passive income is the way I am trying to achieve that. I have been thinking about getting back into HDD mining for years, but harddrive mining is not always easy… Evergreen miner has created a plug and play hard drive mining rig, this HDD miner even has an app which makes it easy to start mining CHIA which is the most popular and profitable coin to mine with harddrives. The CHIA cryptocurrency is the 5th most profitable coin to mine in the world, only 4 spots behind Bitcoin BTC mining according to miningpoolstats. Let’s review the Evergreen miner, which actually is shaping up to be the best mining rig to buy in 2023! 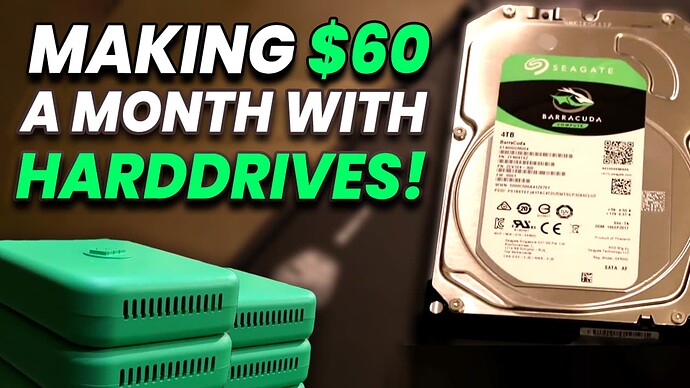 Great Video and awesome to see Evergreen making it easy for new comers to Chia Farming!

I certainly got started with Chia from one of your videos hinting on Evergreen Miners and it’s potentials.

Just an FYI for anyone going the Evergreen route to farm Chia,

K32 plots should have years of life, but depending on technology advancements and plotting techniques, K32 plots will eventually become obsolete and will no longer be farmable for Chia once this happens. Chia will eventually move to K33 or higher plots to maintain plotting difficulty.

So if you go the Evergreen route, have a mid to long term plan on eventually having to re-plot the hard drives once K32 plots go obsolete.

I would like to highlight that currently the Chia Team has not signal that K32 plots are going obsolete. And they also made it well known that if they decide K32 plots should be made obsolete, they (Chia) will give plenty of advance notice (1 year) to allow those with K32 plots to re-plot to the next acceptable plot.

So have a mid to long term plan on what you will do once the time comes to re-plot after the K32 plots are no longer acceptable.

Also, there is word on the street that a new method to compress plots on the hard drives will be officially released. (Rumered to be released early 2023). It will allow more k32 plots per hard drive which equals more earnings in the same amount of space.

Evergreen noted they will be ready to jump on this new plotting technique and test this new method when it comes available with their equipment. But current Evergreen miners do not have this.

But just like anything, new advancements come out, and as a Chia Farmer, you need to keep up on these advancements to stay at the leading edge of profitability. The ability to plot eventually is crucial.

Evergreen Miners take some of the work out, but there are still things one should consider and have a plan for.

The cool thing with the Evergreen Miners is they don’t limit you to grow with only their equipment. If you have one of their Hubs, you can expand via their hardrives or if you know how to plot, expand with your own hard drives and equipment and make them work with the Evergreen hub.

I certainly recommend Evergreen to start, and grow. But also recommend if your’re serious, to learn how to plot, as it will eventually be something you will have to do eventually.

Hey @SpragClutch , I saw a few articles about chia plotting/farming killing hard drives because of the amount of use they are put through. I was looking to get into this on a small level at first with the evergreen setup. Do you have any thoughts/suggestions or opinions on the hard drives they use and the possible longevity?

Also with the new MadMax Ram-Drive technic for plotting Chia, you will barely ever wear out a hard drive (Uses all Ram for most of the plotting)(Need a minimum of 128 GB of RAM to do MadMax Ram-Drive)

Miners learn quickly, and burning up hard drives costs a lot of money and time. So they have learned to either use the correct Hard Drives or use RAM to do most of the heavy lifting.

Evergreen Miners use re-purposed Hard Drives (which plays into Chia’s green block chain Marketing). I personally would not worry about the re-purpose Hard Drives as farming them will lightly use them, plus Evergeen has a 90 day warranty.

Thing to note is Farming and plotting are two different things when it comes to Chia.

Plotting is very Hard Drive intense, which you must use the correct commercial grade Hard Drive to Plot (Or use a RAM-Drive).

Farming is very light use of the Hard Drives. You will farm the hard Drives once they are plotted. Evergeen Miners Hard Drives come pre-plotted. So you will only farm with them. They should last a long time.

Plotting is ususally done on a commercial grade Hard Drive, once the plot is created it is moved over to a traditional Hard Drive to be farmed.

Basically the Evergreen Hard Drives you will receive with the starter kit, would never have been used in the hard drive intensive environment for plotting. They merely hold the plots that were created.

I hope this makes sense…

I highly recommend getting started with the Evergreen Miners. They allow you to get your feet wet and start to grasp the concept of Chia Farming.

But eventually you will have to learn to plot. Evergreen Miners come with K32 plots, which will not last forever. Eventually they will need to be re-plotted… But this should be 2-3 years away. Plenty of time for you to learn how to plot and find the right equipment.

Don’t let plotting deter you! You can get a decent plotting computer for a very reasonable price these days. And should be able to plot the current K32 plots, plus be able to plot future K33, K34, K35 plots… and potentially more…

Evergreen Hub will work with non-Evergreen Hard Drives, as long as they are configured and plotted to work with your Evergreen Hub. So you are not limited to strictly Evergreen equipment to grow and advance your Chia Farm. Which is why I recommend Evergreen.

@SpragClutch Thanks for all the info and breaking down everything, I appreciate it. Awesome information on the process, thanks!!

Complete bullshit, Chia farming is a complete waste of money, it’s never going to go anywhere except down.

It’s the perfect timing in my opinion…

Enough people FUDing out, but a pretty solid project…

A good time to cautiously make an entry in my opinion

I have a few older Seagate drive 1T from my old photo days. Can they be connected to the Evergreen miner?

I’m really enjoying the Chia project and have started mining with an Evergreen. Profit with one drive is marginal at best. I’m interested in building my own set up. Any good sources out there?

http://chiaforum.com/ is a good place!

Add a used GPU 3060ti or around there and you’ll soon have a plotter that can create plots in less than 5 mins.

If you shop wisely, you won’t have to spend more than $600 for the GPU plotter

If your situation does not need super fast plotting, just make sure your workstation has a decent CPU (Xeon E2680 V4 or better) and with 256 GB of RAM you’ll be making plots in 15 to 30 mins.

Some of the servers are loud! So do your research if noise will be an issue.

Look into the compressed plots and GPU plotting before fully deciding on a plotter.

It’s all coming out soon and it will be best to build a plotter that can take advantage of all of it.

This is a blog title