Incoming Rig Specs (or, how I may have foolishly spent some USD ;)

So, for my big upcoming birthday (granted, not for several more months… but, this is it for this year

I went ahead and started trying to bid on parts for a rig. I won a couple of things, or found what I hope are good deals. Waiting for everything to come in, but here’s what I got:

It should make about $68 a month, before paying electric (based off NiceHash estimate, unless that crashes at some point). My electric rate isn’t too bad, so probably looking at about $44 a month after electric, probably closer to $40 after transaction fees

Might pick up one more card, if I can get a good deal, as I think that might actually drop my time

Hopefully I’m not forgetting any important parts and hopefully everything works! I’ll post a picture once I get everything in and up and running.

I would not count on the nicehash profitability calculator, try whattomine.com, showing .10 per day for a 470 8gb but even that is just a ball park idea of what the current market is. I see you have a wireless dongle, I have no experience mining on a wireless connection but I would advise against it, just one more thing that can go wrong/cause issues. Keep an eye on coins to mine, with eth going to POW in the future, AMD cards may have less potential for profitability, Ravencoin’s kawpow seems to favor nvidia cards, but eth classic is still going strong.

Yes, the electric is going to be a lot higher with 4 of these, limiting the overall cards on the rig and reducing profitability a bit. But, trying to stay on budget they seemed like a decent deal, especially as they not literally mining only cards like the Nvidia P10X series. I can probably turn around and resell them for a profit with the way cards have been going on E-bay the last few weeks, lol.

Ah well, part of the fun will be setting it up and seeing what sort of performance I can get out of them.

Yea, I would run it on a cable if it didn’t require running wires through my house

Trying to avoid too much domestic disturbance over setting up a rig. From what I’ve read, mining over Wifi isn’t usually too big of a deal as the bandwidth is relatively low. Very true it is something else that can go wrong.

Yup, Eth Classic will probably be around for a while yet. I also imagine the transition to POS will take a little while yet. Though, I do agree it will likely cause a big drop in GPU mining profitability (probably a great time to get used card for gaming!) Even though it’s not ideal, Raven and a few other coins are still technically profitable to mine. Granted, the difficulty may go crazy after the Eth transition, so only time will tell.

But, I am doing this mostly for the fun of it. I don’t expect to be retiring off my tiny mining rig anytime soon

I use a Dlink 1525 or something wireless bridge and an 8 port switch. Just fine with two rigs attached.
I went the Rx580 route myself and the power they suck is incredible. After switching to NVidia, I have been able to significantly reduce power consumption while maintaining a decent Hash Rate.

That is a great point I have been wondering why the profitably was reported lower on those even though the hashrate was decent and tah explains it. I’m such a newb lol. you weren’t able to modify the power consumption to get decent efficiency?

First off, I got sent an EVGA 1000 G3 Gold instead of the EVGA 1000 PS Platinum that I ordered. I contacted the seller, who said he didn’t actually package the order himself and would check if they actually had the item listed

The gold one works, but still not what I ordered. 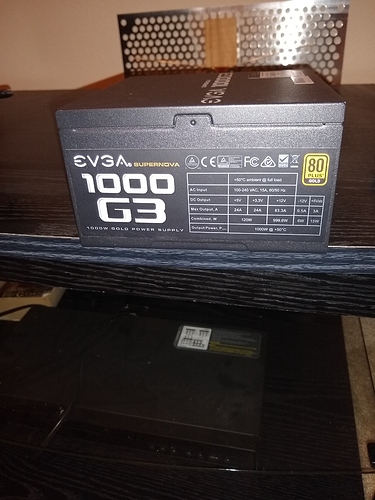 Next up, the 4X 470’s all do not load up any UI from their DVI port. Not sure if they are A. all defective or B. all flashed with a mining bios that causes them to not operate as a regular video card. Trying to get a functional O/S going to see if I can figure that out/reflash them with a standard image. Pulled an Nvidia GT 730 out of my other PC to be able to see what I’m doing.

Apparently mother boards no longer come with cables? Or, at least not necessarily used ones you get off E-Bay. Had to pull one from another computer to try to set things up with a back-up hard drive I already had, as the SSD hasn’t come in yet.

Speaking of cables, wiring everything up is going to be interesting. The Risers that came with the mother board take molex or 6 pin connections. The PSU came with tons of SATA cables, and 1 molex connection. I’ll probably need to get another cable, or an adapter, to actually run all 4 cards with powered risers.

Also important, there’s a lot of cool BIOS features on the B250 Mining Expert. Apparently one of them is to emulate keyboard and mouse over USB, which took me forever to figure out was turned off. My USB with windows install would load up, and the keyboard and mouse would become inoperable.

Next up, my old Windows 7 installer USB apparently does not contain USB 3 drivers, as it predates them. So, once I got into the setup, it complained it couldn’t find any device drivers. So, now I’m downloading a windows 10 ISO to flash to the drive and give that a shot. 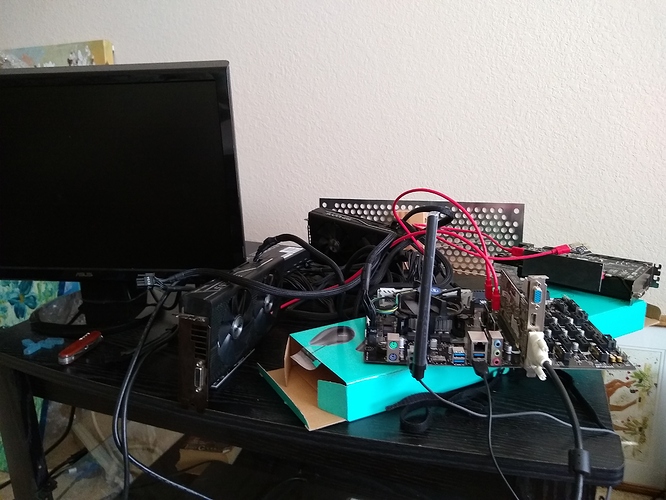 Still no case yet, so just trying to test the parts that I did get, with some stuff pulled from my actual computer

On the fun side, I did figure out how to turn it on using a swiss army knife

I also got a cheap power monitor, to see how many watts it’s pulling. Pretty low power usage so far, when it’s not mining or doing anything, lol. 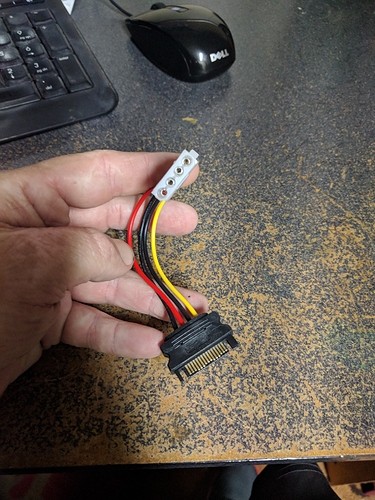 You prob need some of these

Well, I managed to get most of it together. Apparently the b250 mother board holes do not line up with those in the AAAWave 6 GPU case

The hard drive is an old mechanical, since the SSD hasn’t come in yet. Also, missing the 2 power cables for the 4th card and riser 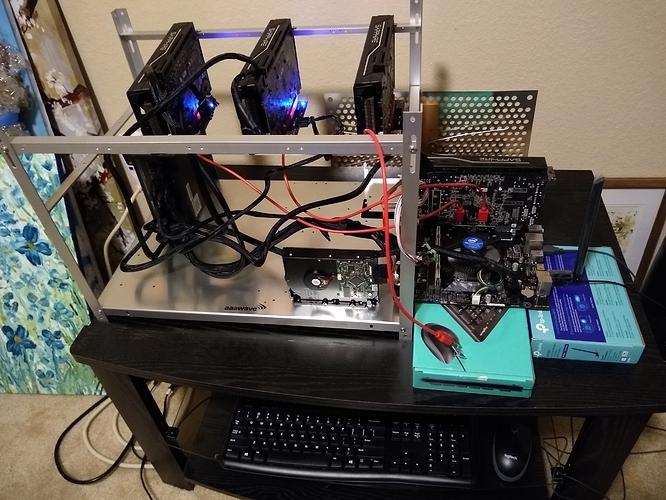 Getting some oddly low numbers on benchmarks for Etherium though. Been trying to mess with the settings a bit, but right now they’re only getting like 10 M/H… KAPOW is coming out as 7-8

Probably need to try messing with drivers and settings, it’s supposed to get around 24 stock, so something seems off.

What miner are you using and what OS?

Running the NiceHash set of benchmarks on Windows 10.

damn I won’t be much help with those I am not familiar with that setup I use HiveOS on Linux. I really like the way my rig is preforming now so I decided not to mess with it until I start having issues with it. I was thinking of putting Windows on my rigs for a bit to see if I can make some improvements.

Well, it turns out those benchmark numbers were BS. I manually ran the Claymore Dual miner to benchmark, and it’s reporting 28 MH/s after some initial zeros when it first starts up. I think NiceHash was averaging the zero results with the 28’s and saying 10

Going to let it run for a bit and see if it stays at solid numbers. 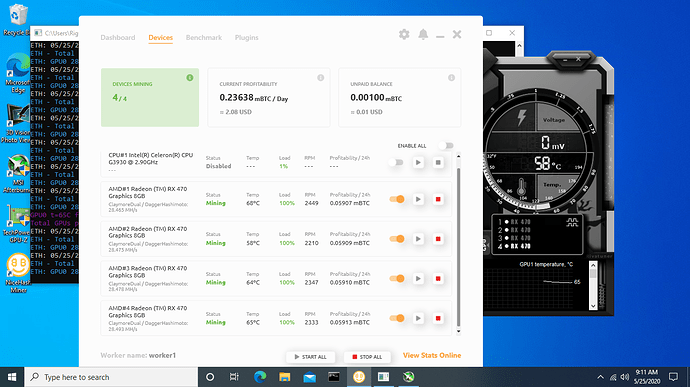 Ok, actual hash pulling about 620 watts from the wall. I did figure out some rewiring that got all 4 plugged in, though one is kind of awkwardly placed right now. Getting a couple additional cables would make it look better, lol.

This is running with the latest AMD drivers in compute mode (though, for some reason NiceHash keeps saying I still need to enable it, even though I already did). Messing with the setting for the cards will hopefully get some better efficiency. I have yet to try doing undervolting or anything too in-depth to try to get optimal performance.

So, trying to mess with undervolting the cards to see how that works. On the VRAM Tuning I dropped the voltage from 1000 mV to 900 mV across all 4 cards. My watts at the wall dropped from 610-620 to 530-540, the average card temps seem to have dropped, and my hash rate hasn’t seemed impacted so far

All 4 cards are using Micron memory, which I can’t seem to find much in the way of good settings on. Most of the posts are from 2017/2018 and are mostly for Samsung or Hynix memory cards. If anyone knows what they’re doing and has any suggestions with the modern AMD tools, please let me know your suggestions! 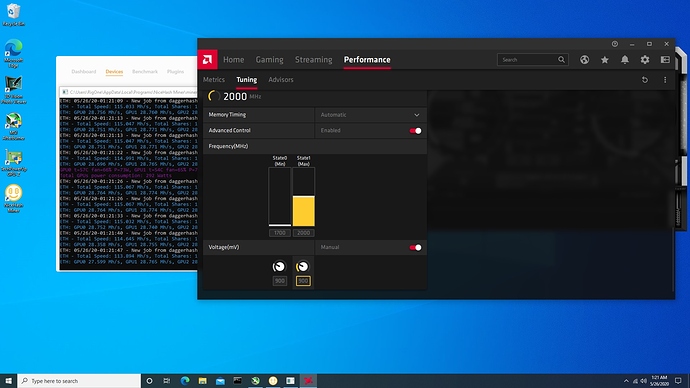 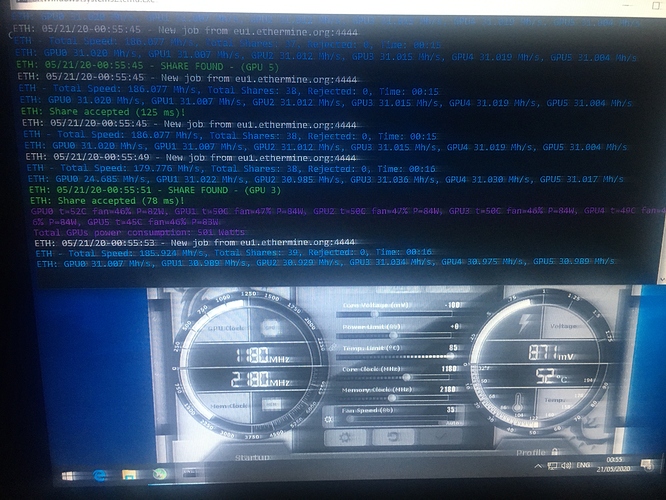