Tips and Tricks and Downloads for GPU Mining Ravencoin in 2020 - KAWPOW Hardfork!

Ravencoin RVN is GPU mineable again thanks to KAWPOW!

Long story short Ravencoin is a mineable cryptocurrency that was originally GPU mined, and later ASIC and FPGA miners took over their network. Ravencoin has now hardforked or changed their mining algorithm to KAWPOW which is basically a tweaked version of ProgPoW, a mining algorithm that seeks to allow GPU and ASIC mining rigs mine effectively on the same network. There are no current known KAWPOW ASIC miners, so for awhile GPU mining will be profitable on Ravencoin.
You can checkout our GPU mining rigs mining Ravencoin on F2Pool here.

Download the Voskage one-click Windows Ravencoin mining package for Nvidia and AMD here!
All you have to do is click the zMine_Raven_F2Pool to start mining, remember to edit your wallet in!

Again, KAWPOW is a customized version of ProgPoW which is sort of like an Ethash 2.0 in basic terms. What I’m saying here is that, I’d recommend using the same or similar overclock settings on KAWPOW and ProgPoW as you have used mining Ethereum in the past. If you haven’t used those overclocks, start with an overclock of +100 core and +100 memory, and build up from there. For reference here are my overclock settings with my AMD rx470 mining rig.

In our first four hours of mining Ravencoin RVN since their hardfork to the KAWPOW mining algorithm, we have mined 129 Ravencoins. Originally we had a Nvidia 1660 super, 2 RX580’s, and 9x rx470’s mining Ravencoin. About an hour ago we also got out p104 rig online mining RVN, which again, is basically a 9x 1080 GPU mining rig. You can check our miners here, replace our Ravencoin wallet address with yours to see your miners mining. 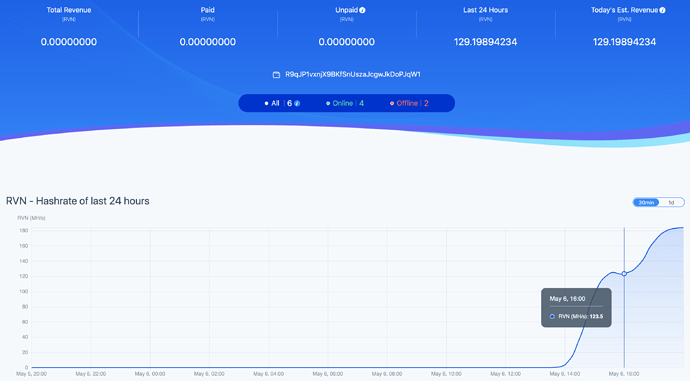 Want to mine Ravencoin on Linux or smOS? You can do it!

If you want to mine Ravencoin with Nvidia GPUs you can use TREX miner on smOS.
Currently, we are using t-rex v0.15.3, but we recommend using the latest version.

We are mining Ravencoin on Linux with AMD on smOS using Kawpowminer
Currently, we are using kawpowminer v1.2.2-cuda, but we recommend using the latest version.

Remember to change our wallet address with yours, and to use the correct CUDA version, if you don’t know it’s probably easiest to just try each version, or do some googling.

At the time of the hardfork the Ravencoin network hashrate dropped to around 1th/s, down from ~35 th/s. Although the hashrate is not directly comparable, it was an extreme drop which is good and also what was intended. At the time of finishing this write-up the network hashrate has just breached 2 th/s. Short-term GPU mining profitability will continue to be very high on Ravencoin, especially in comparison the the coin and USD earnings prior to the KAWPOW hardfork mining algorithm change. Long-term this is excellent news for the GPU mining community, and in our opinion, also the Ravencoin community. We are excited to see a bold mining algorithm change, and support Ravencoin in their attempt to be proactive for their community.

If you enjoyed the VoskCoin write-up and tips and tricks guide for mining Ravencoin in 2020 POST KAWPOW hardfork, please consider subscribing to VoskCoin on YouTube here, and signing up for the VoskCoinTalk forum! 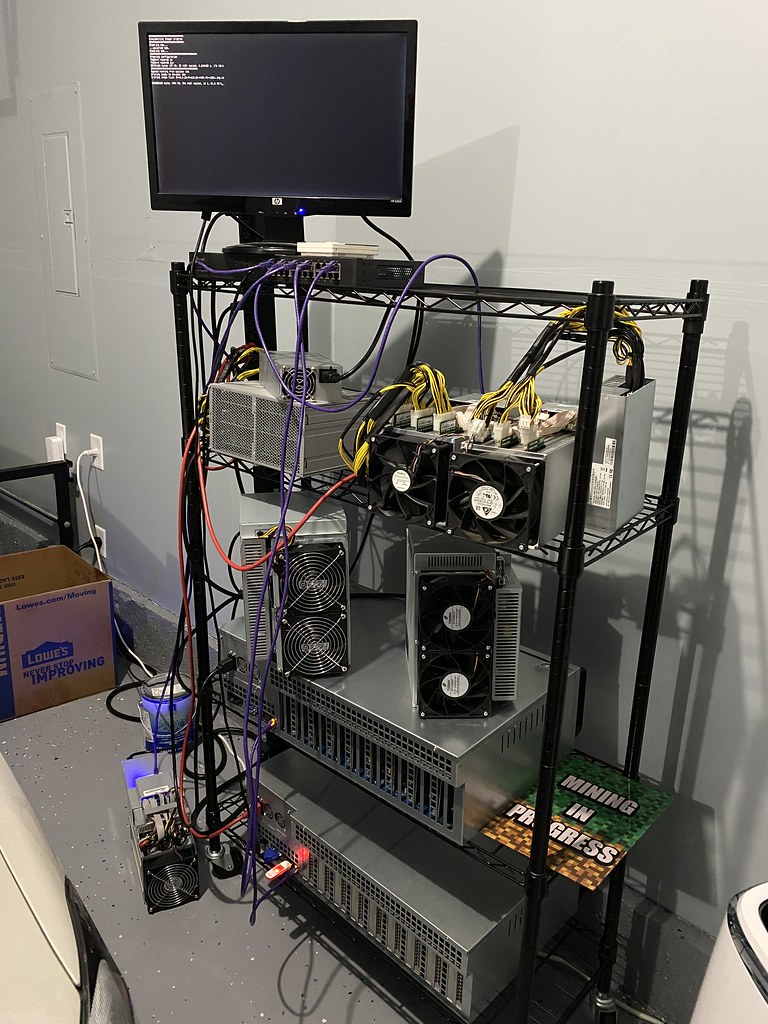 Extra resources & notes for mining Ravencoin in 2020 on KAWPOW!

If you’re looking for a comparison of the Ravencoin KAWPOW miners which benchmarks all of the RVN miners against each other seekest the highest hashrate and thus highest earning miner you can review MinerMore’s article here. This write-up compares nbminer vs t-rex miner vs kawpowminer vs ttminer seeking the one that has the highest hashpower and thus is most profitable.

AMD and NVIDIA graphics cards can mine Ravencoin on the new KAWPOW mining algorithm, Nvidia graphics are typically slightly more powerful and more efficient than AMD GPUs when mining Ravencoin KAWPOW and to be honest this is partly due to Nvidia GPUs typically just being better and more powerful graphics cards. Remember that KAWPOW is just a tweaked version of ProgPoW. 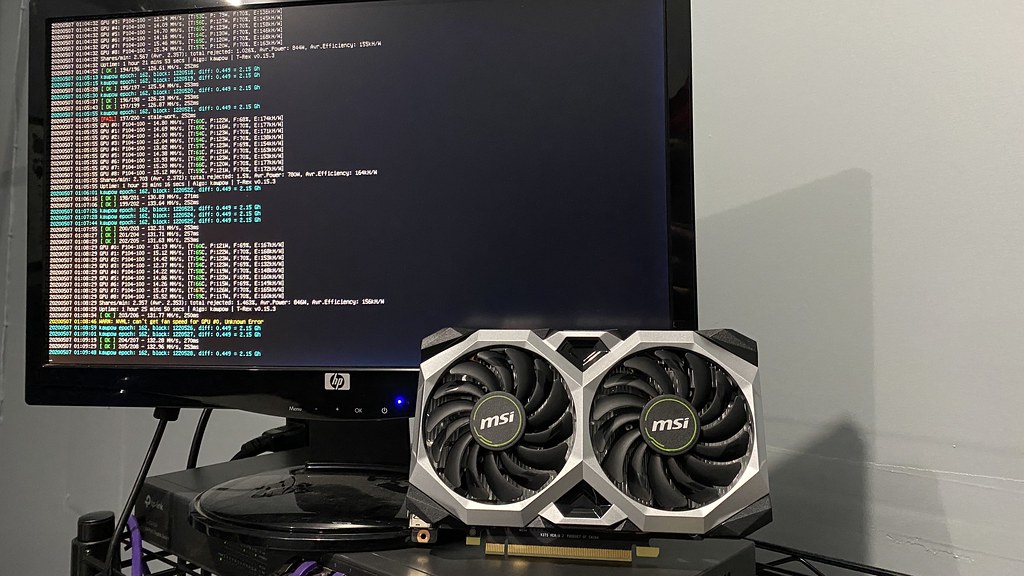 If you’re looking for the best Ravencoin mining pools, here are some of the top RVN pools!

Suprnova.cc is a long-standing and reputable mining pool created and operated by ocminer, it’s been a top mining pool for mining altcoins ever since we have mined crypotcurrencies! Below are configuration and bat files supplied by them for all four of the best Ravencoin KAWPOW miners.

The history of RVN Ravencoin mining

VoskCoin has been covering Ravencoin since it was created in 2018, here’s a link to our original GPU mining guide on Ravencoin (outdated but still fun to look back on)


We also created an updated video mining guide when Ravencoin forked from x16r to x16rv2, this is again an outdated Ravencoin mining guide but fun to watch!

It was very difficult to acquire a Ravencoin RVN ASIC miner, but we finally were able to get the owminer which is a RVN asic miner, this ASIC miner does not work on their new mining algorithm KAWPOW, but again an interesting piece of Ravencoin mining history

Basically the best GPU’s for mining RVN on KAWPOW!

do you think AMD cards need a new driver for better performance on Raven?

Thanks as always vosk. Sharing some results: 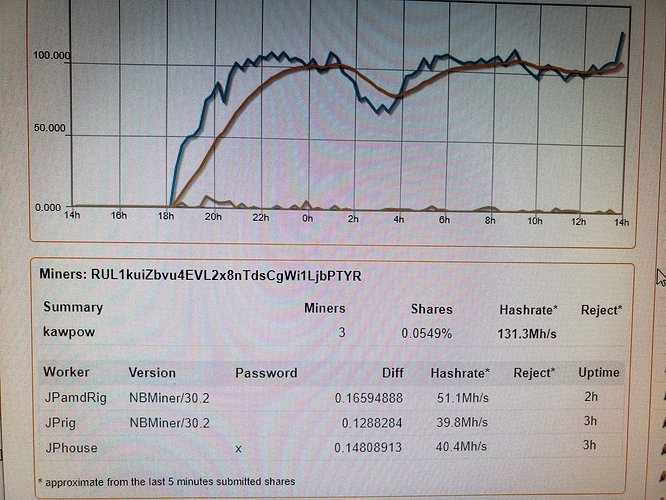 @VoskCoin. Thanks for this review. I may have a similar miner to you, the G9 from Minerdude with P104s and using SMOS. Loaded in the t-rex miner and tried your OC settings from your post and didn’t so well. You did a +1400mem?!

I’m getting the best performance with +200core, -500mem, 120wt PL. These settings pull 14-15MH/s. With +1400mem I was getting 10MH/s and temps maxed out faster. I don’t have sufficient cooling in the room to run hotter than this PL setting.

I had to use the program kawpowminer v1.2.2, located at Bitcointalk. Extract that to a directory, then include the following in a batch file:

Don’t forget to change the wallet address, or you are mining for Vosk!

hey, I’ve been following you on youtube for a while and watch your videos :), and since today I am also on this page

I have 3 graphics cards 2 times amd rx 570 8GB and an nvidia gtx1060 6GB just got the T-Rex and on the AMD PC “Bminer” I’ve had 15 raven coins together for 8 hours. So in 24 hours I will have 45 coins around $ 0.90 is my bill correct? if that were the case, that’s fine, but that’s exactly what I can do with my 3 graphics cards at Etherum. does anyone have a tip for me? because the new algorithm should be better and bring more profit right?

Hey, Has the algorithm been changed again? because the speed is very slow? does anyone have any problems?

What miner and GPU are you using?

Best miners for Kawpow - Nbminer, Zenemy, Trex (check you have the latest version without dag file bug)
If you mine RVN with AMD then Nanominer or WildRig.

My stat - https://woolypooly.com/coin/rvn/wallet/RByuL6icigq8MQCdHGDZsJZJF7shSE8oqe
More than 2 RVN with 1 Mh.

I know I’ve been boasting about Nicehash a little too much here… But if you ever have some extra satoshis, their marketplace is also a good way acquire RVN and many other spec coins! Few weeks back when BTC dropped I mined 640rvn, 20000ckb, 300hns quickly and for a decent price.

Would you be willing to share some screenshots? Basically what’d you put in, and what’d you get out, on what dates at what prices?

Sure! Looking at the numbers I did not get out what I put in, however I am happy holding the coins and will likely use a litle btc here and there to mine some more. I would consider GPU rigs however my only 30a mining circuit will be tapped out soon…might have to get a bigger shed!

I deleted the CKB mining sub account on F2Pool so unfortunately my revenue data was lost. I attached an SS of the wallet to show amount. 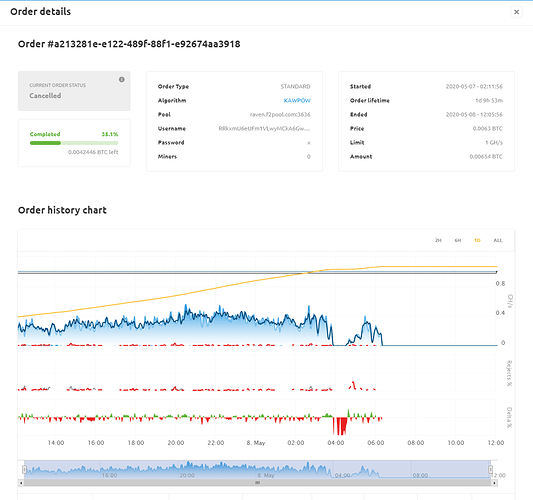 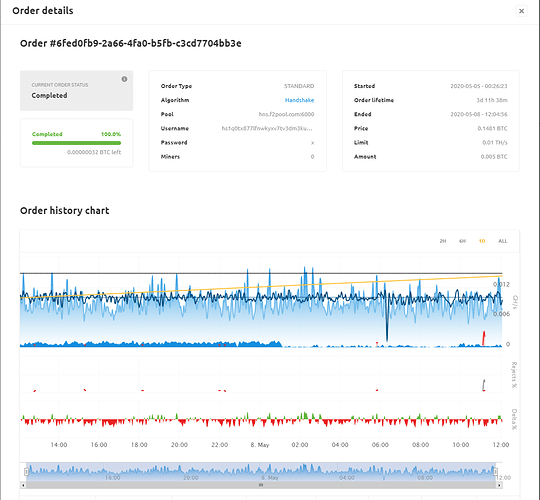 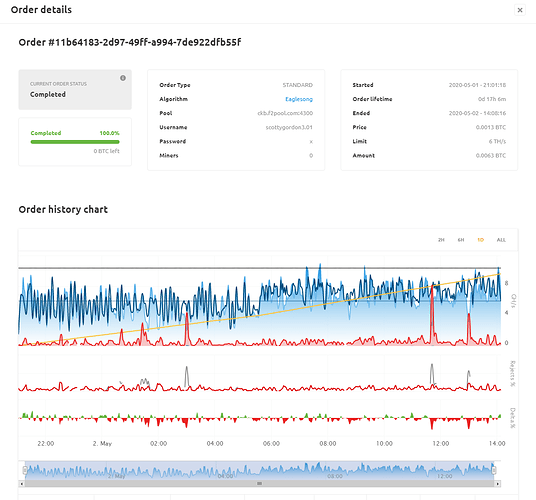 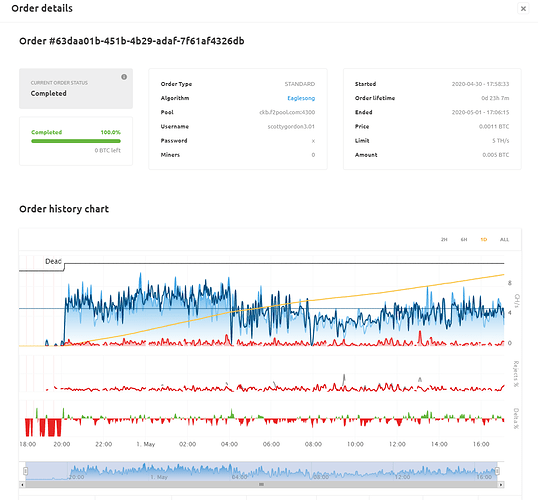