Should I have just bought Bitcoins instead of building the VoskCoin Bitcoin Crypto Mining farm? Probably, but here is the latest update on how my cryptocurrency mining farm build is going! Subscribe! https://voskco.in/Sub

This is the most profitable cheap miner to buy right now! https://voskco.in/egm
Watch the full journey building out my mining farm here (playlist) - https://www.youtube.com/playlist?list=PL4dnwHTjcf-9qfOEekcjPwqJqgkO455f-

Building out a solar powered bitcoin mining farm continues to be incredibly difficult, time consuming and a very expensive endeavor but here is the latest news on the VoskCoin mining farm and uh maybe some of you in the youtube comments were right! I’d have less gray hair if I had just bought Bitcoin but sitting on BTC for years would it be relaxing not to me probably boring! lol anyway, here’s the VoskCoin Mining Farm Build Update. 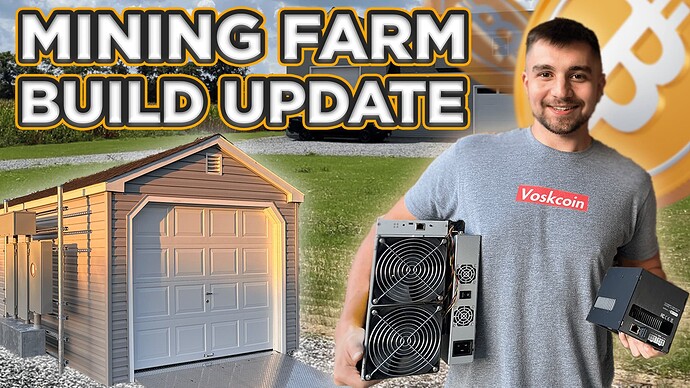 The property is looking good. Lots of space and room for future expansions. You mentioned running Ethernet to your outbuildings. I recommend fiber. Its not much more expensive and offers more bandwidth, longer run lengths. You could also centralize your switching and routing into a MDF. If you decide to bury copper make sure to use a quality cable not CCA. Make your LAN as big as you can.