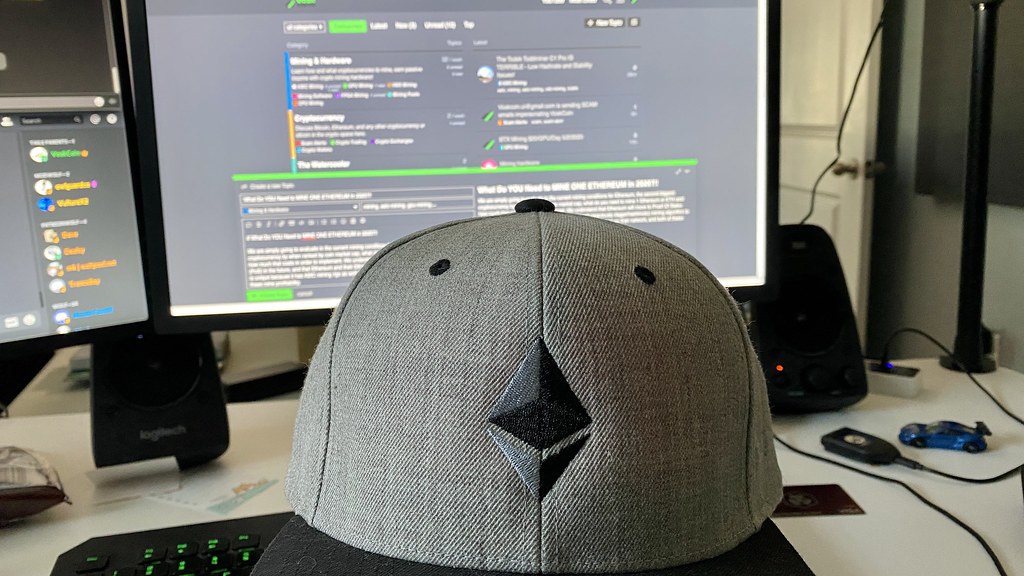 We are simply going to evaluate in the current mining conditions for Ethereum, the second-biggest cryptocurrency by when ranked by coin market cap, what do you need to mine 1 Ethereum or ETH and how much that costs in order to implement. We understand that Ethereum will move to Proof Of Stake (PoS) in the future, and that Ethereum and their Ethash (previously daggerhashimoto) mining algorithm is unique because it has ASIC mining rigs as well as GPU mining rigs on their network, and both of these mine profitability.

Do you prefer video? VoskCoin video overview of mining 1 ETH in 2020!

This entire write-up on Ethereum mining, what it takes to mine 1 ETH a day, and just the relative mining profitability is all based around simple math. First we need to understand how many Ethereum are mined or basically created, each day, and that would be 13,642 Ether as of yesterday.

In order to mine about 1 Ethereum a day, we will need approximately 15,500 megahash a second or mh/s, the measure of hashes/hashrates on Ethereum, basically the speed of the mining rigs. 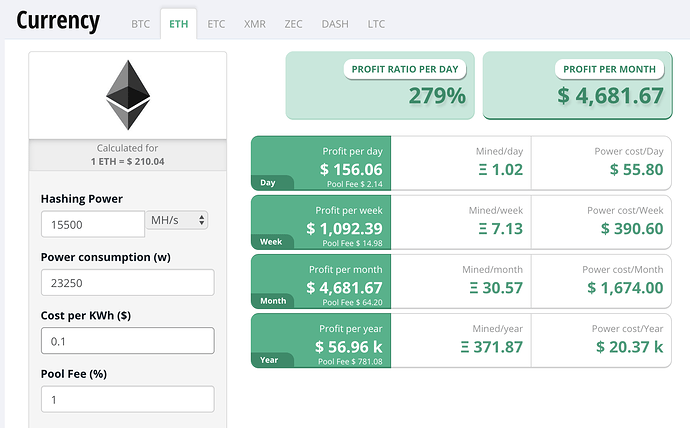 As we said earlier, you can ASIC mine or GPU mine Ethereum in 2020. If you are going to use GPU mining rigs, which are basically computers with additional graphics cards added to them to provide a higher hashing power or mining speed, then you will need 552 AMD RX470’s. 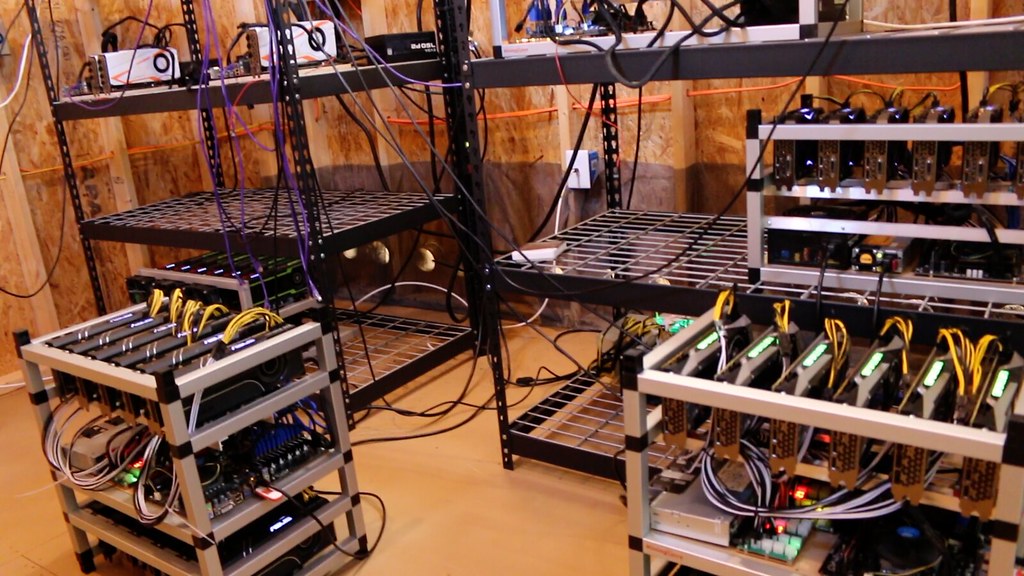 A RX470 has been a popular and cost effective graphics card that has always excelled at mining Ethereum. If you were to build a mining farm of 552 of these graphics cards, which would likely be 69 8x GPU mining rigs, you would achieve a hashrate of 15,456 mh/s and consume 44,160 watts of power. 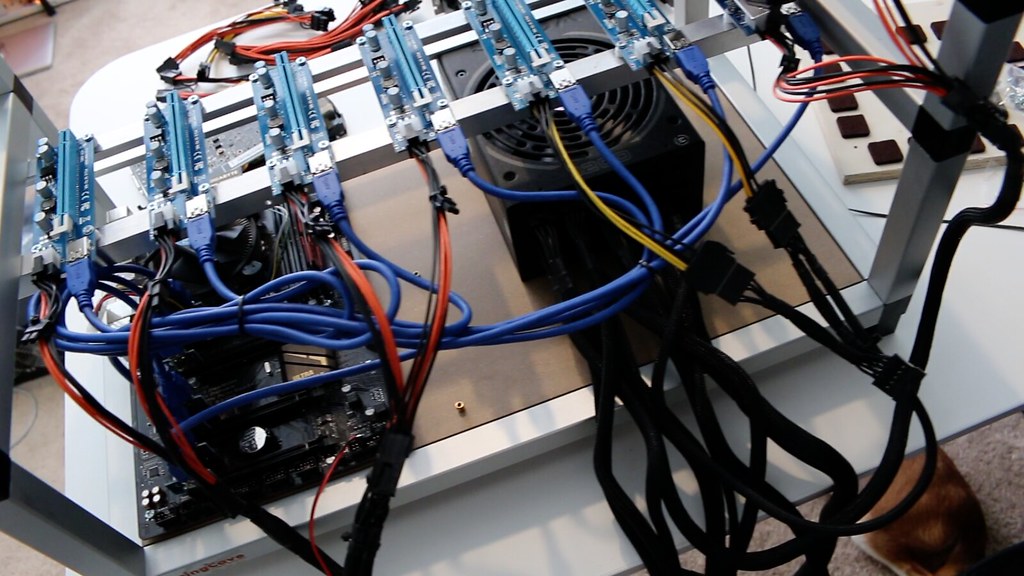 How much would it cost to build 69 8x RX470 GPU mining rigs, well this answer has varied over time but in 2020 it would cost ~$2,000 per mining rig or less. Let’s simply assume that the price totals to $2,000 per GPU mining rig, it would cost you $138,000 dollars to build a GPU mining farm in 2020 that would mine 1 Ethereum a day. To keep this write-up relatively simple I am not going to factor in the cost of building the facility that would house 69 GPU mining rigs, but that is relatively small scale as far as mining rigs go and could certainly be accomplished for ~$50,000 or less. At a standard residential electric rate of 10 cents per kWh it would cost you $105.98 dollars a day in power, leaving you with $106.61 of daily mining profitability, or about 0.5 Ethereum. You would need to double this mining farm in order to mine one ethereum a day at this electric rate. If you access have 5 cents per kWh electric rate, which is the standard electric rate for mining farms in the USA, your power cost would be $52.99 a day, leaving you with $159.61 of ETH mining profits, or about 0.75 Ether mined a day. 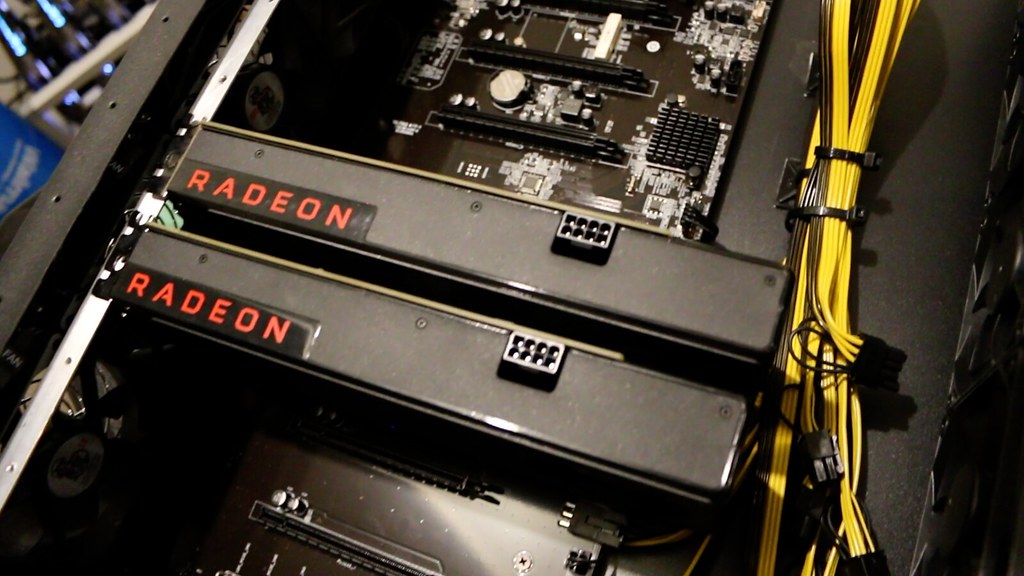 To save you the long story, Ethereum and their mining algorithm was supposed to be ASIC-resistant and thus created to facilitate GPU miners mining Ethereum and running their decentralized blockchain network… but the big ASIC manufacturers like Bitmain and Innosilicon figured out how to create ASIC miners for Ethereum, and they’re much more efficient than GPU mining rigs. For this comparison we will be using the best Ethereum ASIC miner, the Innosilicon ETHmaster A10 miner, which is still being produced in volume and able to be ordered at the time of writing this article. 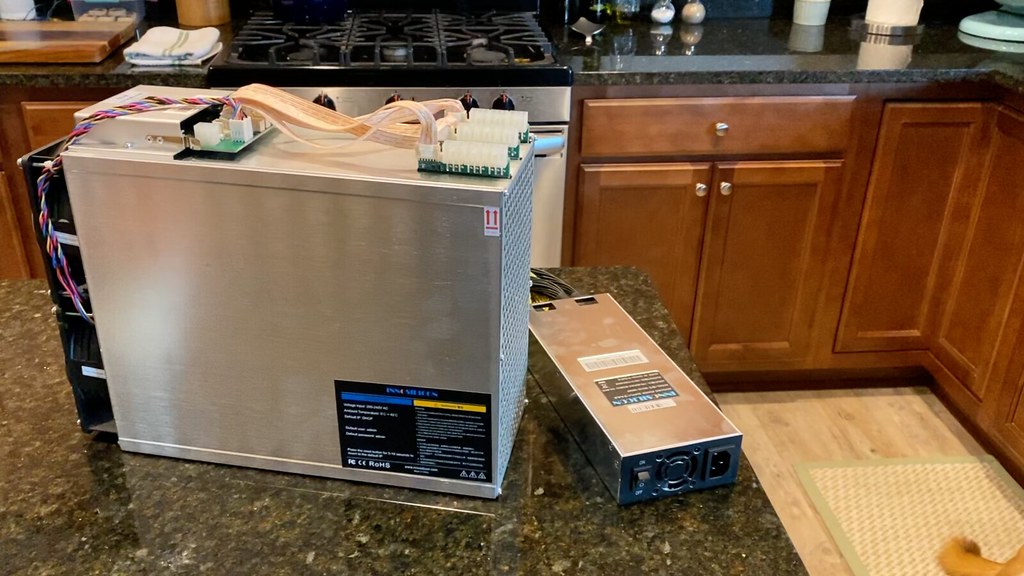 31 Innosilicon A10 Ethereum ASIC miners will mine 1 Ethereum a day, with a power cost of $55.80 on 10 cents per kWh electric leaving you with $156.06 dollars of mining profitability or 0.75 Ether mined a day after paying your electric bill. 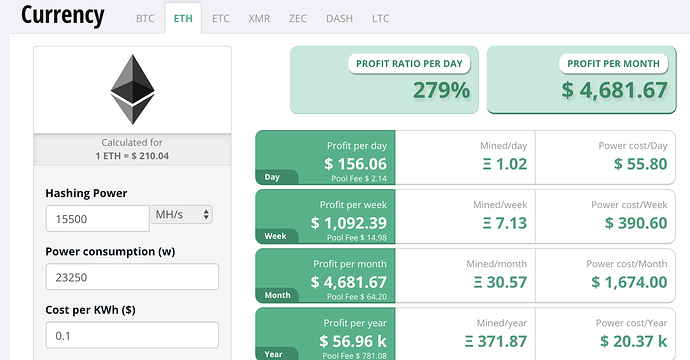 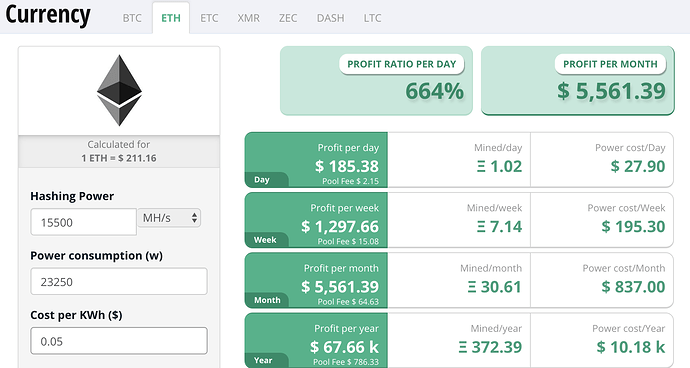 The Innosilicon Ethereum ASIC miners are more expensive miners in comparison to the GPU mining rigs, but they are twice as powerful as well as twice as efficient. Speaking from our experience with our DIY shed mining farm, it is much easier to manage 31 miners as opposed to 69 miners. Cryptocurrency ASIC miners are also much easier to manage than GPU mining rigs, which is why industrial cryptocurrency mining farms prefer them and primarily use ASIC mining rigs for mining Bitcoin, Ethereum, and any other cryptocurrencies that they can. Currently it costs about $3,000 per Innosilicon A10 Ethereum ASIC miner, so it would cost you $93,000 to buy 31 Ethereum ASIC miners to mine 1 Ether a day, adding in an estimated ~$30,000 cost for a mining farm to support these miners it would be an estimated total cost of ~$125,000 dollars. The estimated mining farm cost is cheaper because these ASIC miners are more efficient than the GPU mining rigs, these miners consume 50% of the power required for a comparable hashrate. 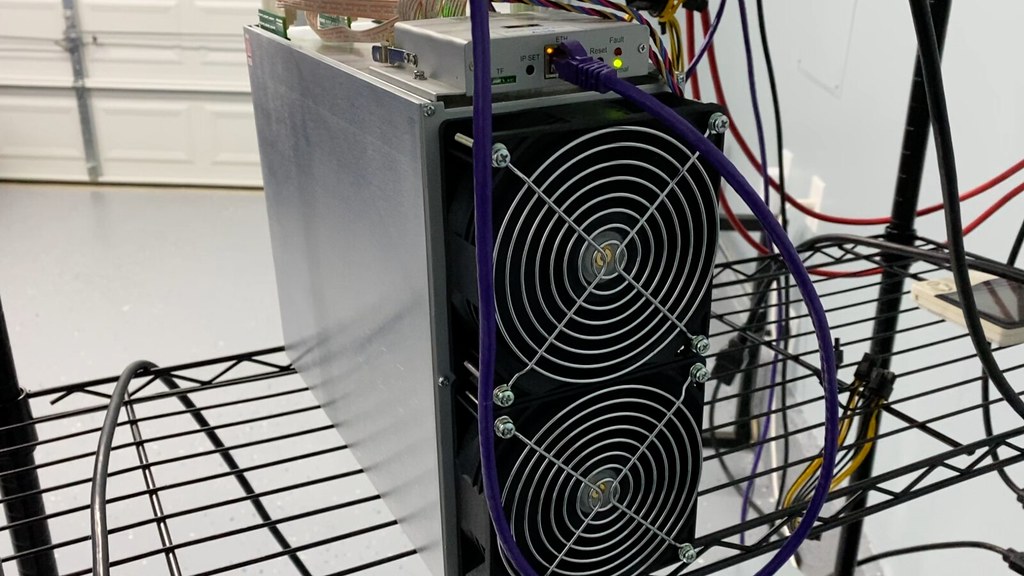 So yeah you need at least $100,000 dollars to mine one Ethereum a day in 2020, crazy right? Pretty impressive Vitalik Buterin. 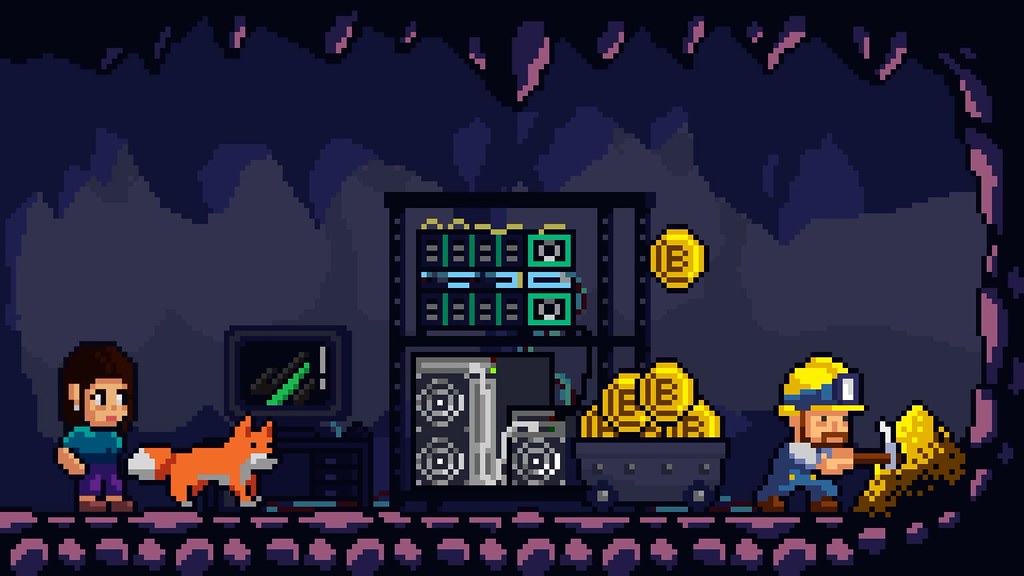 Wow that kinds puts it all into perspective. It’s gonna be crazy to see how mining is affected by ETH going to POW and also the BTC halving.

I was just wondering this, you saved me a bunch of time working it all out.

No. Vosk is not offering investments. If someone contacts you claiming to be doing so, it is likely a scammer.

And then take 1/2 of that profit as “unearned income” by the government (at least in the US)?

One of the best articles giving a unique perspective that I’ve read in a long time.
Good stuff!