Who is still using NiceHash and their Nice Hash Miner?

March 28th 2017 was the earliest documentation I could find of myself mining on NiceHash.

Some people have made a lot of money and cryptocurrency mining on NiceHash, some others have lost money due to the NiceHash hack that occurred at the end of 2017. NiceHash has received some negative press because of the hack along with the platform being used for 51% attacks on different blockchains in the past.

The hack was unfortunate, but I always mined directly to my wallet address so the worst that could have happened to me during the hack was losing a weeks worth of mining payouts. I was not using NiceHash the week of the hack, however (IIRC).

I also do not fault NiceHash for any of the 51% attacks. If each cryptocurrency developed its own unique mining algorithm instead of piggy backing on the development and success of other blockchains for example Zcash and ZenCash (now rebranded to Horizen), then it is extremely unlikely any of these cryptocurrencies would have been successfully 51% attacked.

The third common complaint I see against NiceHash is that you shouldn’t support a centralized service like this and that you should just mine a coin directly. I believe you should directly mine a coin that you like, believe in, and want to hold long-term, yes, however I think services like NiceHash are excellent for mining profitability coins that you do not like, do not believe in, and do not want to hold long-term. It is also more difficult than ever for US citizens to sell their coins, so using a service that converts obscure altcoins into BTC which is easy to convert to USD (if desired), has huge potential benefits.

The main reason I like services like NiceHash is that these “one-click miners” are the best for onboarding new users to cryptocurrency and mining. Mining is daunting, especially in the beginning, even myself tried mining with NiceHash before I downloaded my own coin-specific mining software. I understand these types of users, because I WAS one of those users at the beginning of the cryptocurrency journey.

Moving forward, mining with NH in 2020

I just downloaded the latest NiceHash miner as NH has agreed to sponsor a review and tutorial video on the VoskCoin YT channel. NiceHash miner 3 is the most polished NH miner I have ever used. 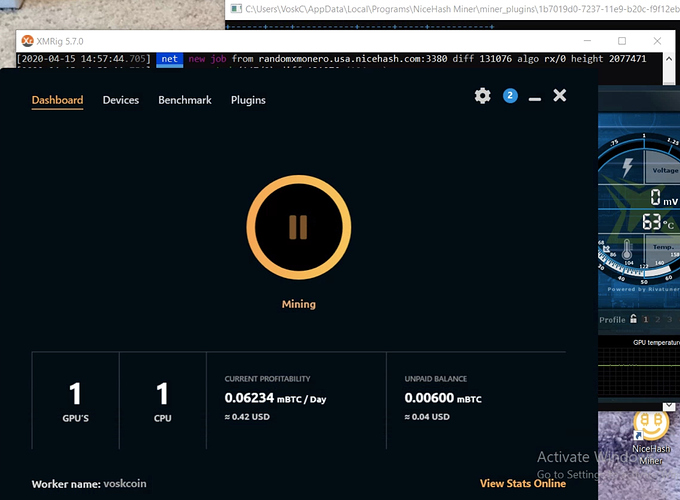 Screen Shot 2020-04-15 at 3.06.23 PM2450×1800 450 KB
Mining with NiceHash is a pretty straight-forward setup, you download the program, you tell your computer it’s not a virus…because your anti-virus software will likely try to quarantine it because it contains common cryptocurrency mining software (which can be used maliciously, but NiceHash is not doing this). On the old NiceHash miner, the whole mining experience was centered around your Bitcoin wallet address. NH has moved to an account system now, so you’ll make an account with them and then load your Bitcoin wallet address into your account for subsequent payouts.

Today along with the latest NiceHash miner 3 release of version 3.0.0.8 this is what the user dashboard looks like, which is not completely synced with their downloadable miner. 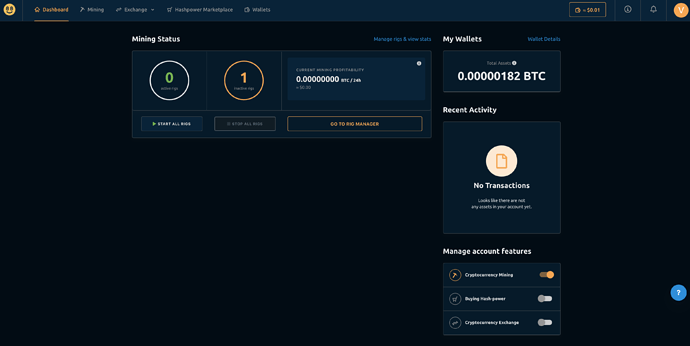 I’m going to continue testing, gathering data, and I’ll compile the NiceHash mining experience into an updated 2020 NH mining video review for the VoskCoin YT channel. I’d love to hear your thoughts on NiceHash, mining with them, their exchange, and if you have ever bought hashrate via their platform as they are what’s considered a “hashpower marketplace”, where basically you can rent mining rigs to mine specific cryptocurrencies or rent out YOUR mining rigs and be compensated in BTC. 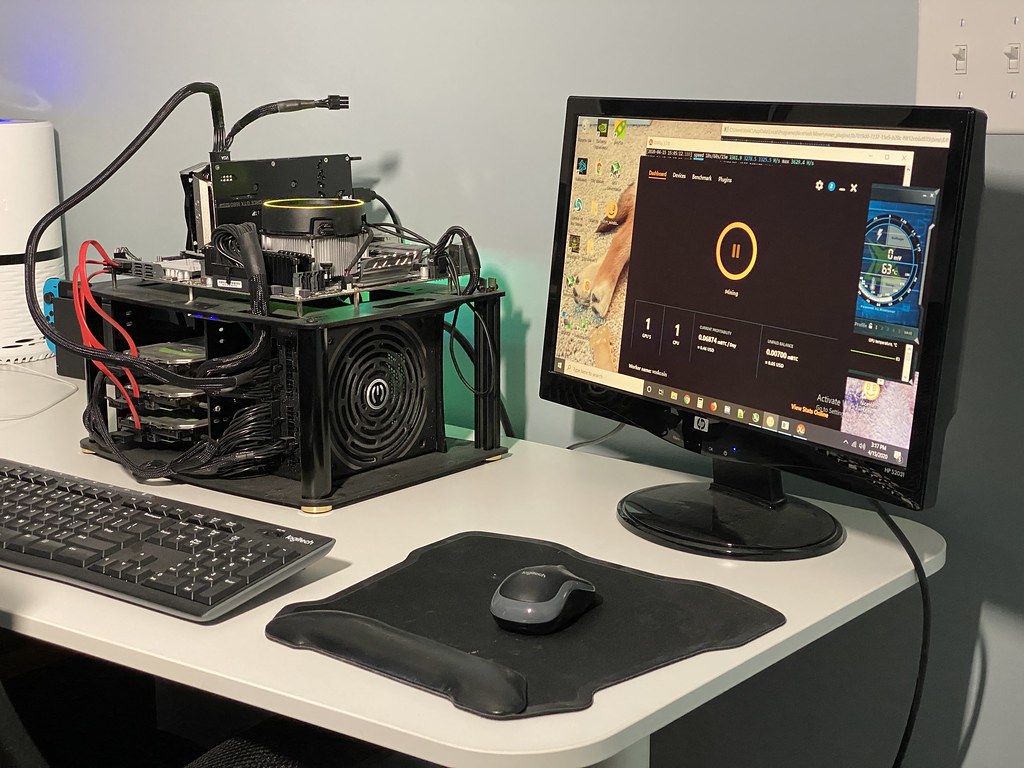 I have used nicehash as an easy way to mine or test devices. I have also used the nicehash’s hashrate marketplace to mine coins. For quite a while I have kept a little bit of BTC mining ETH and GRIN. The trick with mining this way is to set your price low and forget about it. Don’t get sucked into altering the price to try and keep your hashrate up. Calculate a profitable rate and set your order and leave it. I consistent get 10% to 20% returns on orders. Sometimes they finish quickly. Sometimes they finish in a couple weeks. 10% returns week on week isn’t too bad.

I started mining on NiceHash and seriously the next day they got hacked. I tried many other hashpower market places, but my Xeon system always seems to have be n an issue or didn’t earn as much as NiceHash. So I’ve been steady since they came back. Other hashmarkets let me sell cpu hash, but were paying Out ½ of what NH did/does. Even though I was selling more hashpower🤔

They’ve put a lot of work into the new miner system. The beta testing was fun and turned out to be a nice profit.

It’s still fluctuating quite a bit! Making more than with f2pool (2 x S9)

I’ve tested out several other pools (f2pool, nanopool, Luxor, etc) and Nicehash still makes me more for the same time period of mining.

That is good to know! I will use my other Asics on Nicehash, if only Canada Post would deliver my PDU

i really like their interface and they seem to work fine

Was told by someone I could do a review on them. So, today I reluctantly opened browser with nicehash. It brought me to the main mining interface. Asked me to update my software to the latest “version”. Suddenly my asic hashrate dropped on almost if not all asics running. Who is this company again?

Provide some data and screenshots to verify your claims, otherwise all of your recent posts here are just hating/FUD on NH. I back up everything I say with data if possible.

@Rocky_Bro don’t worry bro! I’ve only been on NH on and off for just over a month, always been a bit glitchy with asics. I find they do not show hashrate most of the time and the profitability fluctuates all of the time…however they are still mining!

These are both S9’s

Umm, these asics are set to different pools. They have never been attached to the pool at nicehash. At least I personally never attached them. Aside from perhaps a try in the earlier days with no success. It is bad enough they would take money i earned through them but come on man.

Seems like you have beef with a service you aren’t currently using! Go lie to people elsewhere.

Listen closely, that is criminal behavior. Don’t tell me to go away.

I do have data but not about to share it here. Also, price manipulation should be illegal at any level. Shitcoins or not.

Why aren’t you comfortable sharing it here? That is the purpose of places like these.

Barking orders is easy. Nothing easy is good. The key is to set a prime example. This proof can go straight to the fbi if you still want. My guess is that you have been taught better than this.